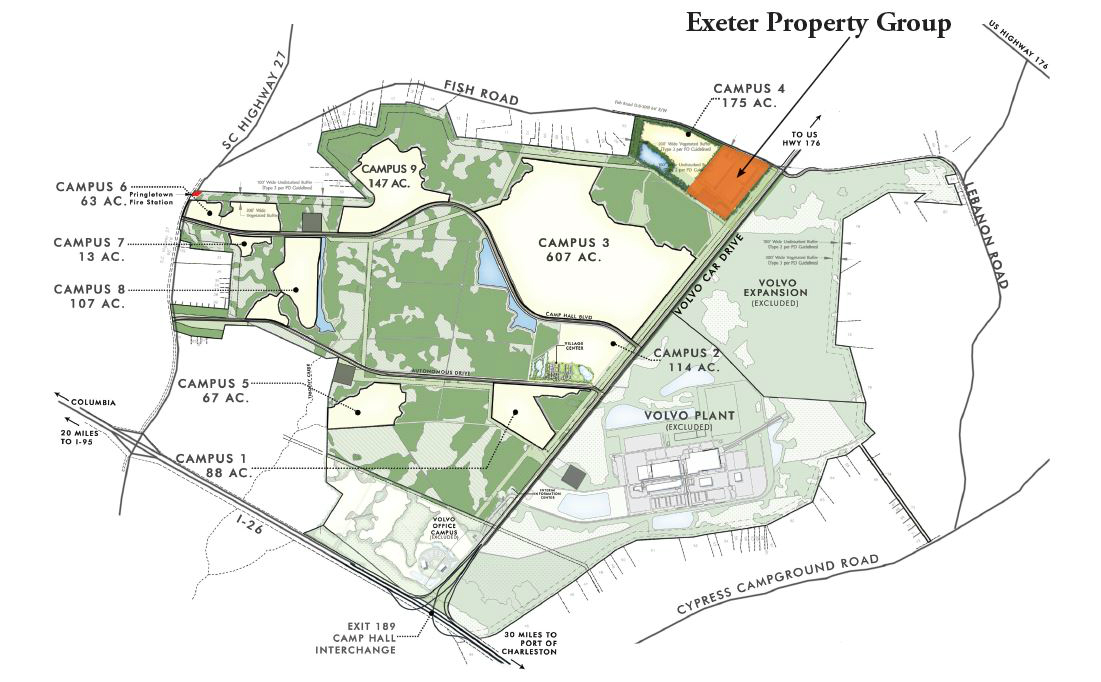 Exeter Property Group bought a 77-acre tract within the site and plans to build a logistics park with three speculative buildings totaling 945,000 square feet of space for industrial, bulk warehouse and distribution tenants.

Exeter’s speculative buildings will sit on Camp Hall’s Campus 4 near the intersection of Fish Road and Volvo Car Drive.

The mostly wooded Camp Hall site has 1,300 developable acres remaining, as well as 1,950 acres of preserved land and several new roads. Construction of a new highway interchange will provide direct access to the site from I-26.

The remaining available tracts range in size from 13 to 607 acres. Santee Cooper officials said they plan to recruit industrial tenants and developers to the site and create mixed-use developments for site employees, which could include a doctor’s office, a day care, shops and restaurants.

“The sale signals the progression of Camp Hall as a world class commerce park designed for the needs of the next generation of industry,” Williams said.

Exeter, which has its U.S. headquarters near Philadelphia, is a real estate investment management firm that acquires, develops, leases and manages industrial and business park properties across North America and Europe.

“Santee Cooper’s commitment to making Camp Hall a success through their investment in infrastructure and amenities, as well as Camp Hall’s access to interstate, ports, rail and a growing labor pool were critical in Exeter’s decision to pursue the development,” Cochrane said in the release.