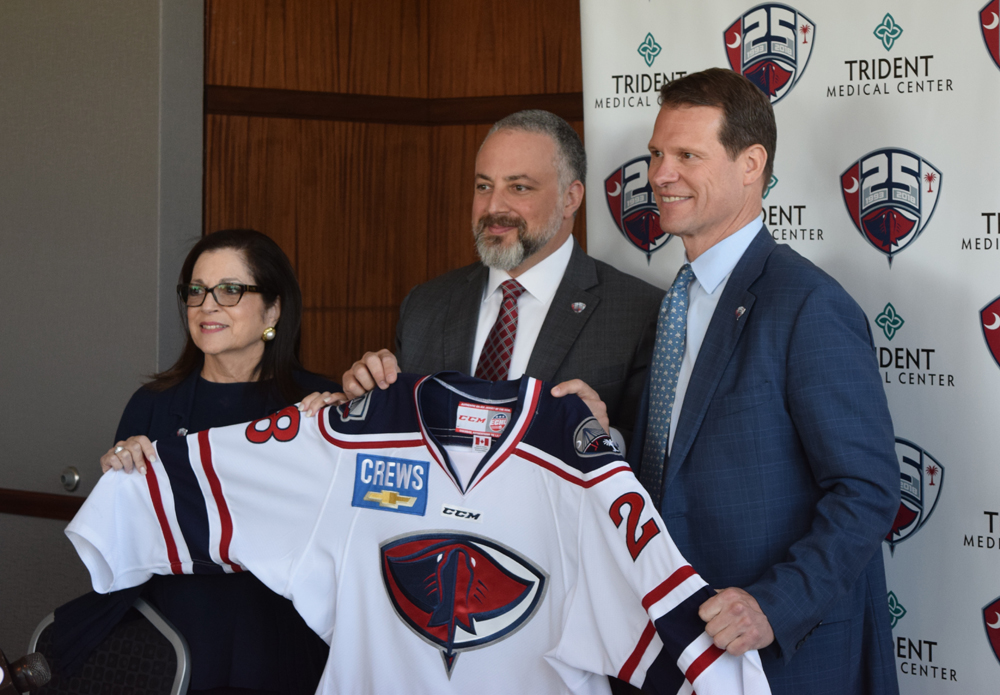 The S.C. Stingrays are under new ownership after Anita Zucker and Jonathan Zucker sold controlling interest in the hockey team to private equity investor and businessman Todd Halloran.

“My mother and I are a bit distracted by our primary business and really don’t have the opportunity to spend as much effort on the team as we would have liked, and ... we realized that it was time for us to take a look at doing the responsible thing for the future of the team,” Jonathan Zucker said.

The Zucker family has served as majority owner of the Stingrays for most of the team’s 25-year history. With the sale, the family retains a minority interest in the team, but financial details and ownership shares were not disclosed.

“We think that now is the right time to make a bit of a transition,” Jonathan Zucker said. “And I would like to say, we searched for some time to find the right partner, somebody who had a commitment to the game of hockey and was also committed to the community. And I’m thrilled to say that we found that partner in Todd Halloran.”

Zucker said his family will remain involved in adult and youth hockey through the Carolina Ice Palace, which they also own, and some holdings in Canada.

Halloran is currently a partner at Freeman Spogli & Co., a Los Angeles and New York-based private equity firm. He said he grew up playing hockey and has always had a love for the sport.

Halloran said he wanted to acquire a team in the ECHL because the league’s business model is different from those of the American Hockey League, a tier above the ECHL, and the NHL, both of which Halloran said can be driven by championships and confined by salary structures.

But “what happens in a market like this (Charleston) is the team takes on a greater importance,” he said. “It is a team in the truest sense of the word. The popularity, the interest, isn’t in any one player or any one star, but in the team and what it brings to the community.”

Halloran added that the Stingrays in particular were of interest to him because of the region’s growth and the presence of the team in the community.

“If you talk to other organizations around the league and minor sports in general, the South Carolina Stingrays is often mentioned as a model to copy,” he said.

Halloran worked with the Sports Advisory Group, a mergers-and-acquisitions adviser in the professional sports industry, to identify potential opportunities. Jonathan Zucker said that he and Anita Zucker had spoken with the ECHL commissioner earlier in the season regarding the possibility of selling the team.

Jonathan Zucker said that several parties were interested but that Halloran stood out because of his business acumen and his passion for hockey.

Anita Zucker said that it’s emotional to give up the majority stake in the team but that she doesn’t view this as the end of her family’s association with the team.

“I don’t consider it over, I consider it a new beginning and a way of going forward,” she said, adding that, “We’re doing the right thing. We have bigger businesses, we have so much to do ... and now we have somebody who’s going to focus. Focus on taking this team to new heights and giving it the due that it deserves.”

Halloran said he has no intention of moving the team away from the Charleston area, which Anita Zucker said was key in the decision to sell to him.

Halloran currently lives in Connecticut, but he said he intends to buy a home in the area and split his time between Charleston and the Northeast.

In a statement, North Charleston Mayor Keith Summey said he is looking forward to the city’s relationship with the new owner. Ryan Johnson, city spokesman, said negotiations for a new licensing agreement with the team have not been taken up since City Council approved a renewal of the agreement in early February. Johnson said he expects discussion will begin in the next few months.

The licensing agreement between the city and the Stingrays hasn’t been completely renegotiated since 1997. The most recent renewal is structured to begin taking away some incentives for the team in the contract’s second and third years as a way to bring the team to the negotiating table.