Are you talking to me? I’m patiently waiting right here! 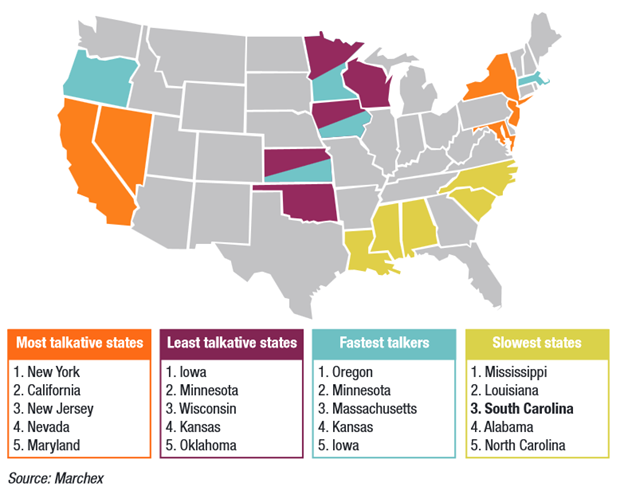 A recent analysis of national speech patterns by Marchex, a mobile analytics company, found that South Carolinians are the third-slowest talkers in the United States.

That’s not a big problem for those living in the Palmetto State, but a lot of folks from off seem to think that slow talking equates to slow thinking.

That’s ... simply ... not ... the case. Though it is true that the top slow-talking states are all in the Deep South, and we don’t always hit the high-water mark for education standards here or there … where were we? Oh yes.

The study found that New Yorkers are the most talkative Americans — though we talk a lot in South Carolina as well (No. 7). Oregon is where people talk the fastest, and the most impatient people are in Kentucky — though they measure impatience by hanging up when you’re put on hold, so maybe we don’t really blame them. And seeing as we’re ranked No. 21 in that category, it seems as though we pretty much agree. It’s one thing to be talkative and another to be rude.

So maybe we have a lot to say but don’t feel the need to just run off at the mouth.