Charleston-based CresCom Bank and its parent company, Carolina Financial Corp., both reported net income increases in the first quarter. However, the bank’s subsidiary, Crescent Mortgage Co., saw a drop in earnings and blamed it on changes to the mortgage disclosure process. 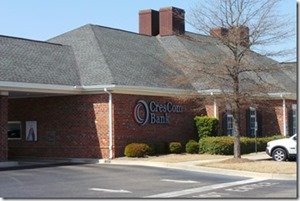 The bank’s net income totaled $3.413 million for the three-month period ending March 31, which is about $940,000 more than the first quarter of 2015, according to a filing with the U.S. Securities and Exchange Commission.

The bank’s focus on commercial lending and residential mortgage lending prompted loans receivable to grow from $922.7 million on Dec. 31 to $964 million on March 31, the filing said.

The number of checking accounts increased at an annualized rate of 9.3% since the end of the year. With that boost, core deposits — checking, savings and money market accounts — now make up 57.4% of total deposits, the filing said.

Additionally, the bank opened a branch earlier this month in Wilmington, N.C., bringing its branch total to 27 locations throughout the Carolinas.

The company has received regulatory approval to acquire the parent company of Cayce-based Congaree State Bank and expects to close the transaction in early June. Rexroad said the operational conversion is scheduled for the early part of the third quarter.

The filing said the drop in net income was caused by fewer loan originations, compression in the overall margin and changes to the mortgage disclosure process related to the Truth in Lending Act-Real Estate Settlement Procedures Act Integrated Disclosure rule, which went into effect in October and is commonly referred to as TRID.

Originations for the quarter totaled $186.8 million, which is nearly $39 million less than the first quarter of last year. Loans that were started as refinances also dropped from 41% last year to 38%, the filing said.