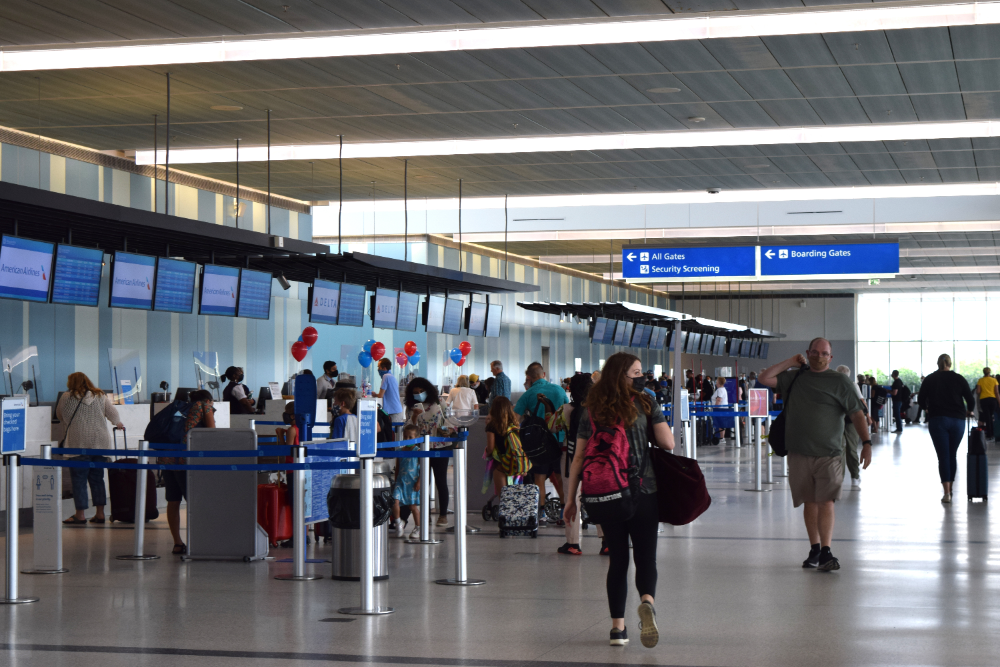 After Charleston International Airport marked a record 2019 in passenger numbers, CEO Elliott Summey said it was “heartbreaking” to watch that momentum fall flat the next year with the coronavirus pandemic.

Summey served on the board of directors in 2019 and started as CEO two months before the pandemic shut down most of the U.S. The shift made him question if he switched roles at the wrong time.

“It’s a gift and a curse. In some ways, it was a heartbreaking. It was heartbreaking for the people around me,” he said of colleagues like Deputy Executive Director and COO Hernan Peña, Deputy Director and CCO Spencer Pryor, and Explore Charleston CEO Helen Hill.

Summey said the team worked tirelessly to make Charleston a flying destination, but then the forward motion came to a halt.

“But it was a gift in that we got to take a breath, look at what worked, look at what hadn’t worked when we had all those folks there, and now we have a plan for how to expand concourse C and expand our ticket hall,” Summey said.

The airport was also able to open a new parking garage under time and under budget since there weren’t any passengers to work around.

The staff spent the year working on master planning, reviewing safety issues and intensely recruiting to the airlines, Summey said. That includes the introduction of Breeze Airways, a venture by JetBlue founder David Neelman. The airline launched its first flight out of Charleston on May 27 and will base operations at the airport, housing pilots and planes locally.

Two years ago, Charleston International Airport set a record with nearly 4.87 million travelers arriving and departing through its gates. The numbers have yet to even out in 2021, with May reaching 88% of pre-COVID traffic and June expecting to reach 90% or higher, but it’s July that has Summey excited.

Passenger checkpoint numbers for the Fourth of July weekend hit triple-digit increases compared to 2020. Saturday, July 3, saw 7,686 passengers come through Charleston International — a 305% increase year-over-year, according to the Transportation Security Administration. The following Monday recorded the highest checkpoint numbers with 10,226 passengers, more than triple the 3,266 in 2020.

“I expect July to possibly, if things keep trending, to be the biggest month we’ve ever had in the history of the airport,” Summey said.

The CEO is watching seat capacity and said well over 80% of seats have been sold, which is better than most airports. Myrtle Beach is currently running in the low 70%, he noted.

One of the big indicators for growth is the return of business travel, which is steady year-round, unlike tourism, Summey said.

“Tourism is tourism, and we are super excited by how well the tourism market has come back, not only for the airport, but for the region,” he said. “A lot of heads in beds is good for our economy, and it’s good for local government with accommodations taxes.”

With Southwest, United Airlines and JetBlue adding new connections and expanded previously seasonal routes, and new airlines like Breeze and Silver Airways launching further options to travelers, Charleston is no longer a stopover, Summey said. Charleston is the destination.

“JetBlue is flying direct to Los Angeles every day from Charleston. Who ever thought that was even possible?” he said. “We’re in every airport in New York and New Jersey, multiple times a day with multiple carriers.”

To accommodate passengers even further, the Charleston Airport is moving forward with expansions and adding a C concourse. The airport is currently working with the Federal Aviation Administration to create a planning document, which is a yearlong process. Design will take another year, and then the new gate is anticipated to be open within two to three more years.

“If you think back to where we were 10 years ago, from an aeronautics standpoint, how we’ve grown… Now we have Boeing and a lot of suppliers here. Breeze has based in operations out of here. We’ve got the aeronautics department over at Trident Tech,” Summey said. “We are growing to be a robust aeronautics hub in Charleston.”

Editor's note for clarity: The print version of this story incorrectly stated, "The numbers have yet to even out in 2020, with May reaching 88% of pre-COVID traffic and June expecting to reach 90% or higher, but it’s July that has Summey excited." The correct year referenced should be 2021.