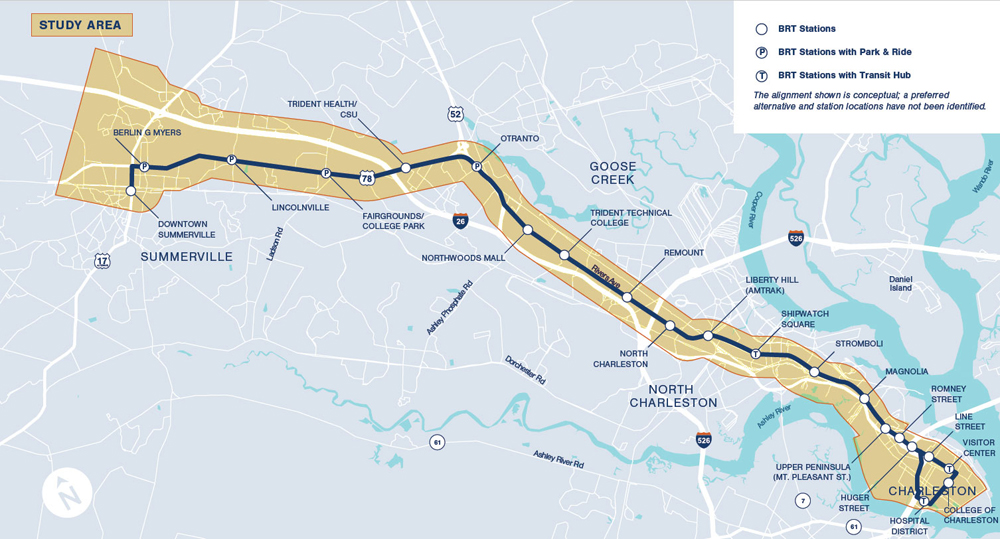 The U.S. Department of Transportation has approved the Lowcountry Rapid Transit project to move into the project development phase, marking a major milestone for the public transportation project.

A Lowcountry mass transit system has been in development by the Berkeley-Charleston-Dorchester Council of Governments since 2014. In 2016, the COG identified a bus rapid transit system as the best option for the region; it has been identifying funding sources and working through early planning stages since then.

The project required DOT approval to move into the next phase because the COG is pursuing federal funding through the Federal Transit Administration’s New Starts Capital Investment Grant program. The program requires agencies to complete a multistep, multiyear process to be eligible for funding; the first phase is project development.

“Receiving preauthorization to enter the project development phase is another huge step forward in making LCRT a reality in our region,” COG Executive Director Ron Mitchum said in a news release. “This step opens critical funding streams and puts us in position to continue generating forward momentum and progress on the project.”

The COG is now required to select a “locally preferred alternative,” including routes, and station locations and designs, among other details. The COG plans to select an alternative by August and adopt it into the long-range transportation plan by January 2021.

The COG also begins a two-year environmental review process required by the FTA and the National Environmental Policy Act to make sure the project best meets the needs of the community and minimizes impacts to the environment.

Lowcountry Rapid Transit is expected to begin service in late 2025.

“Being able to adjust to the rapid growth in our region is important when we consider mobility as a key factor in the expansion,” Mitchum said. “BCDCOG is very excited for this advancement in the LCRT process and is ready to improve not just transit for our residents and visitors in the tri-county area, but their quality of life as well.”

Congratulations to the BCDCOG!...A marathon project that is sorely needed by corridor commuters.