Improvements planned for congested section of I-526

A congested, accident-prone area of Interstate 526 could be widened and improved to accommodate the influx of drivers in the Lowcountry.

The S.C. Department of Transportation is studying a nearly eight-mile stretch of the interstate between Rivers Avenue in North Charleston and Savannah Highway in West Ashley. This project is separate from the longtime I-526 extension plan, which recently lost state funding. 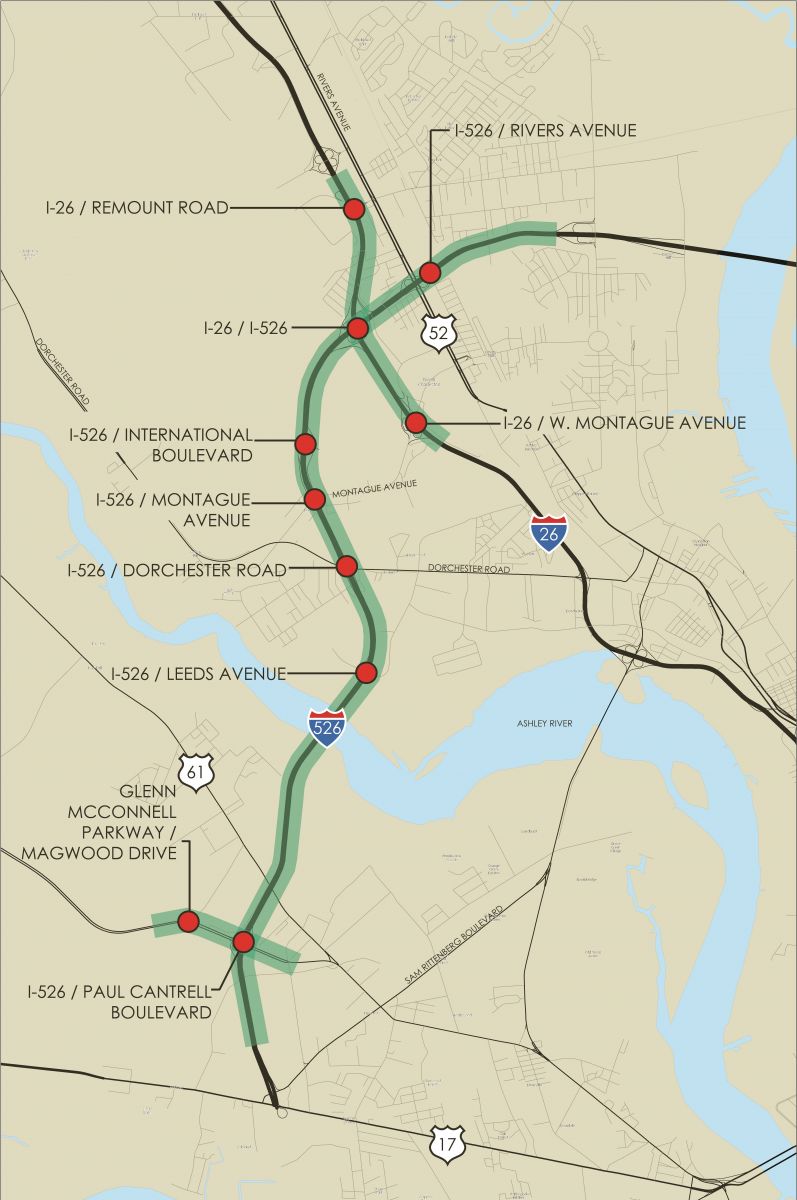 The study area includes the massive, busy interchange of Interstates 26 and 526.

“Whenever you have congestion, you have accidents. ... We see significant safety issues out there, particularly at the interchanges,” said Joy Riley, the S.C. DOT manager for the 526 Lowcountry Corridor Project.

As the Charleston region’s population continues to grow, traffic jams have increased. Commuters typically come to a crawl during morning and evening rush hours on this span of I-526. Accidents often bring traffic to a halt.

In addition to thousands of residents using the interstate, nearly 4 million passengers fly out of Charleston International Airport each year, and 8,000 employees work at Boeing S.C. each day — and they all drive on a small stretch of International Boulevard at I-526.

Truck drivers carrying port cargo use I-526 every day, and the opening of the Hugh Leatherman Sr. Terminal in North Charleston in 2019 will increase those numbers.

“Back when the last segment of 526 was completed in 1992, there were about 50,000 vehicles, and you can see that now we’re already getting above capacity and it’s just going to continue to grow. ... We are designing for the future and what we feel future traffic levels are going to be,” Riley said.

Nearly 90,000 cars travel between I-26 and International Boulevard each day, according to Stantec principal Rick Day. The North Charleston-based engineering firm, which plans and designs roadways, is working as a consultant with the DOT on the project.

Those numbers are projected to grow.

“You can see the growth,” Day said. “It’s going to really go a lot higher over the next 20 years plus.”

The 526 Lowcountry Corridor Project is in the early planning stages. Project managers are studying ways to add capacity, possibly by widening the interstate by one lane in each direction.

They hope to do so by creating lanes near the median, rather than building onto the interstate, which could require demolition of surrounding buildings and homes. They also plan to evaluate each interchange that feeds onto that stretch of the interstate.

The DOT’s Planning Office studied the I-526 corridor in 2013 and determined it was a high priority for the state’s infrastructure improvement needs. The project is now ranked as a No. 6 priority on the DOT’s list of interstates in need of upgrades. 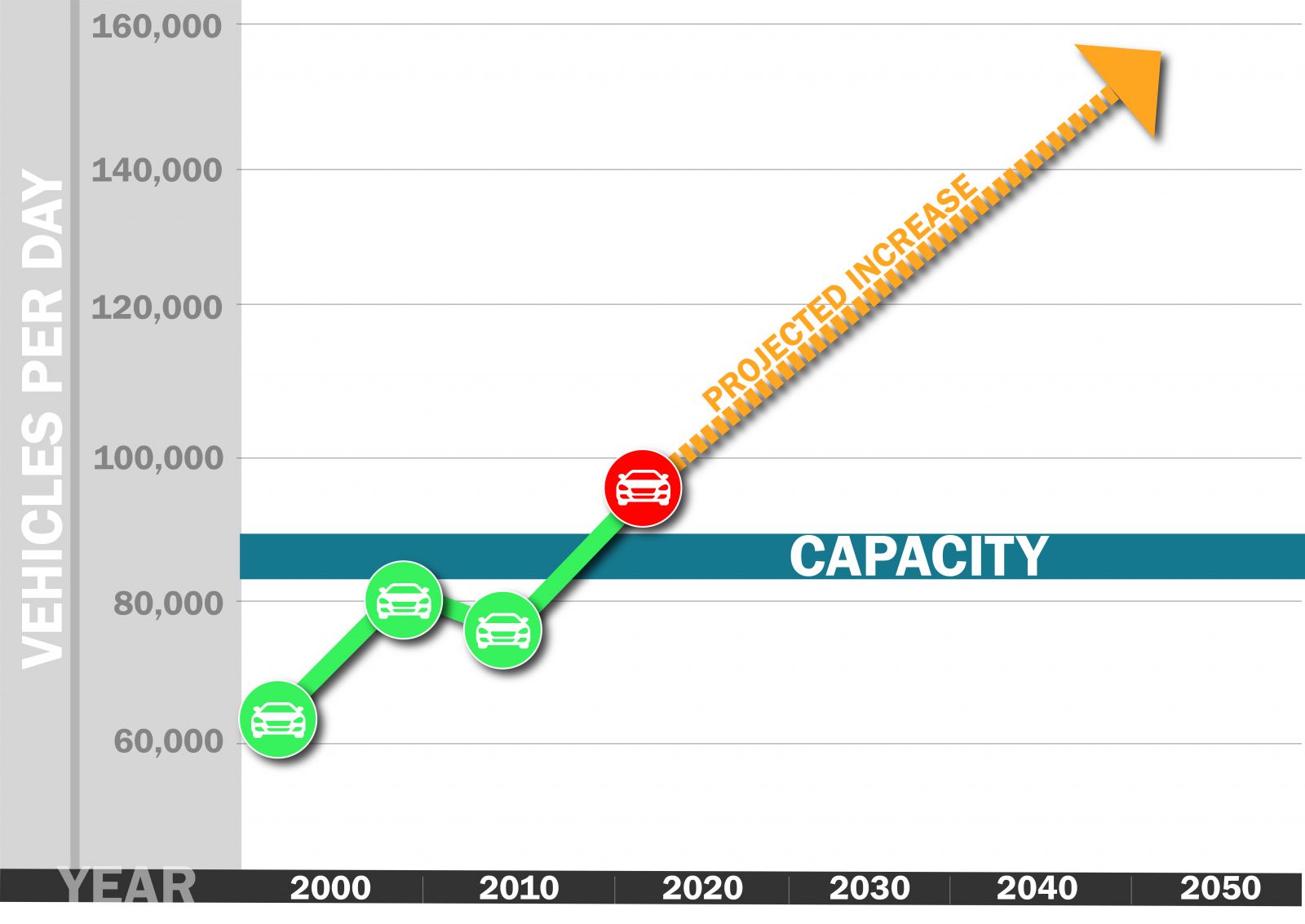 The department has secured $25 million for preliminary engineering work and $444 million for construction and right-of-way acquisitions for the project from the Federal Highway Administration.

Riley said those costs are likely to increase as designs get approved. But she said the scope of the project and the challenge of securing environmental permits in the area are the biggest challenges.

Construction could begin in 2020, depending on the multiyear permitting process.

Riley said this is the time for project planners to engage with the public, before any alternatives are drawn up or studies are completed. Initial neighborhood meetings have been held and are ongoing.

Two stakeholder groups — one made of business leaders and government officials; the other comprising residents and small business owners — have been meeting about the project.

A virtual meeting will be available online Oct. 31Monday for residents who cannot make it to the face-to-face meetings held in the evenings.

“We really want to know what your experience is with 526. What problems are you experiencing? We need to know that information so we can take it into consideration when we start designing some of the improvements,” Riley said. “It is really important to get input and get it early.”

Studies are ongoing. Those findings, along with public comments, will shape the project alternatives.

Numerous designs are being considered for interchange improvements. For example, Day said the loop ramps where Interstate 26 and 526 meet already are at capacity and are in need of a new design.

He said many of the interchanges are so close together that drivers often get on the interstate only to cut across several lanes of traffic and get off at the next exit. Those are known as “weaving intersections.” Day said one solution would be to create a fly-over ramp for the cars getting on the highway, separating the traffic.

Those types of alternatives will be studied over the next couple of years, as will the cost of each alternative design.

“We have one shot to get this right,” Day said. “When you go out there and spend this kind of money, you don’t want to come back and touch it for another 40, 50 years, so we want to make sure we do it right and that it works well into the future with the growth.”