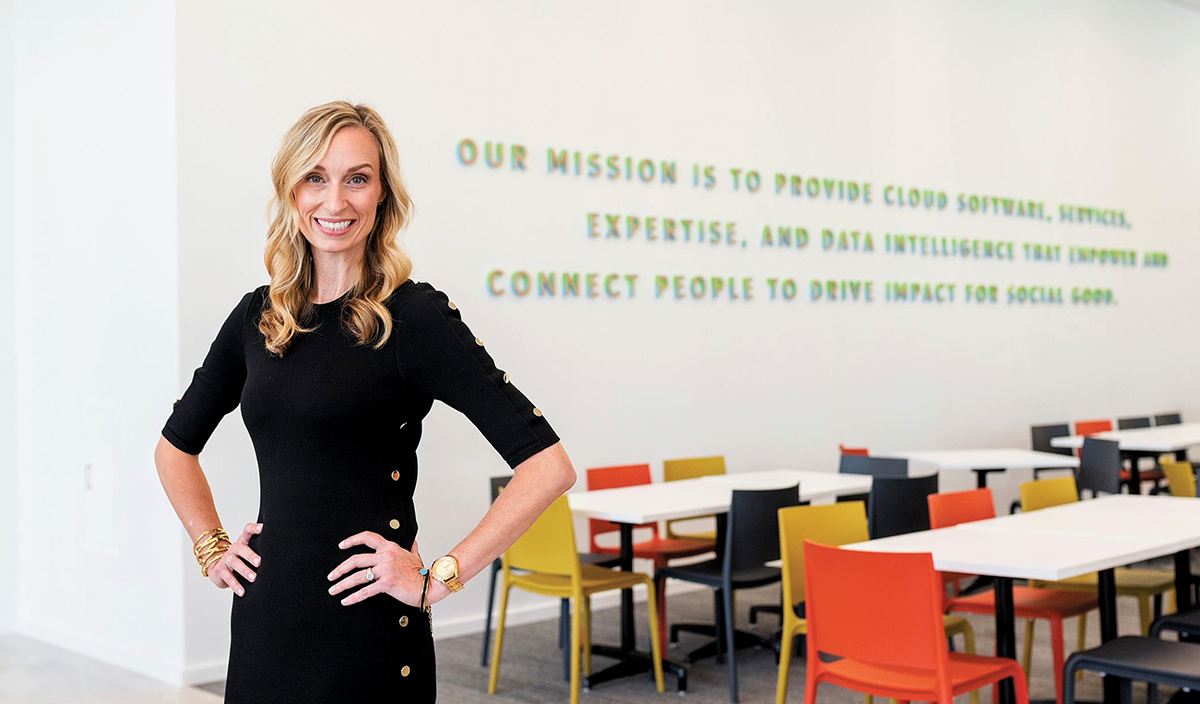 When Catherine Cook LaCour first joined Blackbaud’s executive leadership team in 2014 as vice president of corporate marketing, she was the only woman on a team of all men to directly report to the CEO. It wouldn’t be until about a year later when she would be joined by a female chief technology officer.

Fast forward seven years, she has now been named one of the 2021 Top 50 Most Powerful Women in Technology, representing a female leader who champions diversity in the technology industry. The award comes from DiversityFirst and the National Diversity Council.

“It’s wonderful and overwhelming and humbling to be included with such a prestigious group of amazing women,” LaCour said. “I just want to make sure that I’m helping to make it easier for those that are coming behind me in any way I can.”

LaCour joined Blackbaud in 2010 as director of marketing for the enterprise business unit, serving as a member of the company’s global management team. After joining the company’s executive leadership team in 2014 and later being promoted to senior vice president, she was then named as chief marketing officer in 2018, a position in which she still currently serves and oversees a team of all women.

Although LaCour’s day-to-day tasks at Blackbaud include overseeing the company’s global brand and marketing, her passion lies in empowering women in technology to fight for a seat at the table.

“A big part of my job is looking at how we at Blackbaud are marketing to our customers and working on our brand, but it’s also how we show up in the world and how we live out our values of helping good take over,” LaCour said. “I feel a real responsibility to honor the women that came before me and to support the women that are coming behind me, and I’ve felt that my entire career.”

Part of LaCour’s efforts toward supporting a more diverse work environment comes from her launching of the company’s Senior Women Leadership Council. She said the group was created with the goal of sisterhood and mentorship for the women of the company.

“We focus a great deal on how we help advance others, not just women, but both men and women in the talent pipeline,” LaCour said. “When we announced this group, it was an important moment for Blackbaud to raise the profile of the members of this group as key contacts and as an aspirational path for our young women.”

Along with Mary Beth Westmoreland, Blackbaud’s chief technology officer at the time, LaCour also founded the Blackbaud Women’s Executive Summit in 2016, an event that brings together all the women of the company’s global management team.

“We want to continue to deepen our community connections, and we want to equip our women leaders to carry the message and the leadership models forward with their own teams,” LaCour said. “One thing about diversity and inclusion is that you have to be very intentional, so we’re in this for the long haul.”

LaCour said she lives by two beliefs when it comes to how she approaches her work supporting women. The first is symbolic of advancement in her career: as she climbs, she turns around and holds the ladder steady for those climbing up.

Her second belief is the shine theory, coined by businesswoman Aminatou Sow, which encourages a spirit of collaboration with others, rather than competition, especially among women.

“One woman’s success does not diminish another’s. When you shine, I shine,” LaCour said. “So I want to surround myself with powerful, strong, dedicated women, and it’s going to make me better and stronger, and we as a community will shine a lot stronger than we will alone.”

“Women have to create a path to leadership by working hard and demonstrating their effectiveness in various environments,” LaCour said. “Even when women meet and exceed expectations, that may not always be of equal acceptance, and I think sometimes women can be held to different standards.”

Companies need to train employees to recognize unconscious bias and to acknowledge that as humans, we all have flaws, LaCour said. In this way, LaCour said she is proud of the direction that Blackbaud is moving in as a community to incite change. Women now make up about 46% of the company’s roster, with 44% in management roles, according to the company’s 2020 social responsibility report.

Nine employee groups have also been added over the years to represent different backgrounds and communities that make up the company’s workforce, including groups centered on veterans, LGBTQ members and women in technology.

“With diversity, I liken it to being invited to the party. Inclusion is being asked to dance,” LaCour said. “So that’s something that we’ve really focused on in recent years, and that’s about embracing all employees in a way that inspires them to do and be their best and to being able to bring their whole selves to work.”