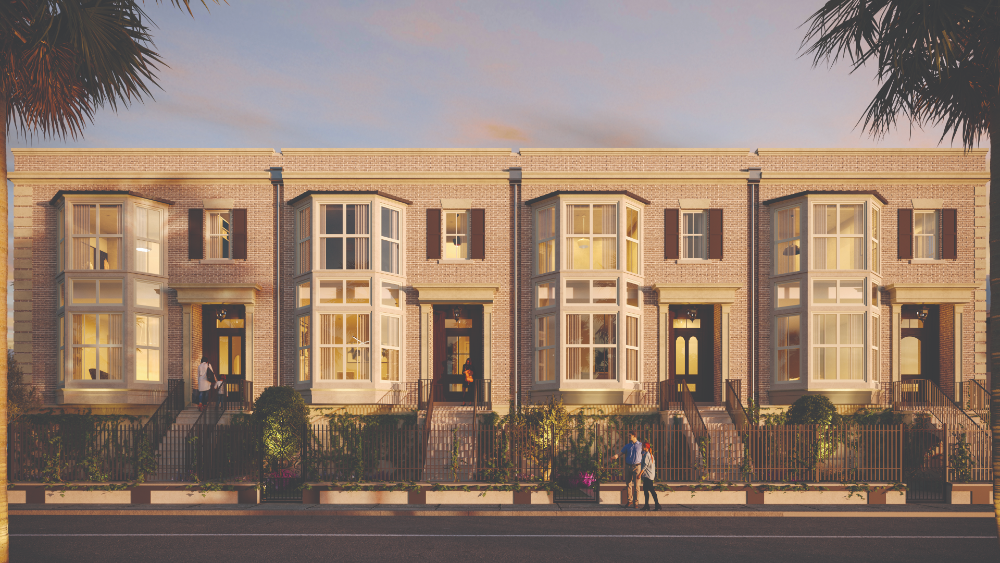 Four luxury condominiums under construction at 122 Beaufain St. in downtown Charleston have hit the real estate market. The units, located one block from Colonial Lake and Broad Street, vary between two- and three-bedroom residences and will include high-end finishes and fixtures, an elevator and rooftop terrace with the option for owners to add a plunge pool.

The residences are listed between $2.5 million and $2.75 million with approximately 3,000 square feet each. Luxury real estate firm, Handsome Properties, is representing the listings.

“This is a rare opportunity to own custom new construction within historic Harleston Village,” Handsome Properties said. “122 Beaufain offers the charm of Harleston Village living with many of Charleston's most popular parks, restaurants and shopping nearby.”

Constructed by The Building Agency SC Inc., the architectural design was envisioned to blend with the historic neighborhood’s aesthetic. Renderings show a three-story structure — two stories of living space — with a brick façade, tall ceilings, windows with wooden shutters and large bay windows. The rooftop terrace will offer views of Charleston’s historic area.

Because the condos are new construction, they include several features such as walk-in closets, garden bathtubs, a tankless water heater, kitchen island and a two-bay garage with room for three cars plus storage. Elevators will service the garage to bedroom levels of the house. Landscaped courtyards were designed by Sheila Wertimer. Construction will refurbish an existing wrought-iron fence surrounding the property.

Unit A, located at the corner of Beaufain and Gadsden streets, has the largest square footage of the four units and has double piazzas along the Gadsden Street side of the building. It features two large master bedrooms and two-and-a-half baths. It’s listed at $2.75 million.

Unit B and Unit C middle units have similar floor plans and feature three bedrooms and two-and-a-half baths with the primary bedroom situated along Beaufain Street with large bay windows. Two additional bedrooms each have access to the rear balcony. The units are listed at $2.5 million each.

Unit D, also a three-bedroom, two-and-a-half bath residence, is the end unit on the right side of the building. It also features the primary bedroom along Beaufain Street with large bay windows. The two additional bedrooms each have access to the rear balcony. It is listed for $2.6 million.

The location of the luxury condominiums is one block from the Moultrie Playground Pickleball and Tennis Courts and walking distance to the Yvonne D. Evans River Walk walking path along the Ashley River, overlooking Charleston Harbor.