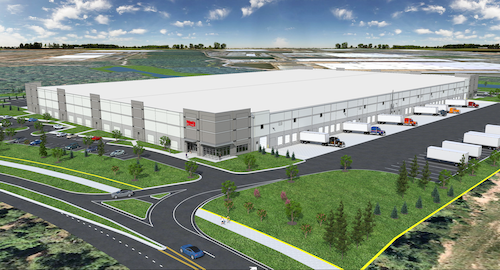 The North Charleston park is one of the strongest industrial submarkets in the region and is currently home to companies like Federal Express, Daimler Vans Manufacturing, Home Depot, The Boeing Co. and more.

TCA, a commercial real estate development and investment firm out of Charlotte, anticipates completing the Class-A industrial space, which is comprised of four buildings, in 2022, the company said in a news release.

Building One is cross-docked, and as the largest building in the park, it will measure 342,160 square feet with 36-foot clear heights. Buildings Two and Three consist of 174,720 square feet each, and Building Four will measure 145,600 square feet, the company said.

“When we re-entered the Charleston market early this year, we anticipated the market demand would increase and that fundamentals would remain favorable,” Massie Flippin, partner at Trinity Capital, said in the release. “Having witnessed that, we’re enthusiastically accelerating our development plans and expect the quality of the product, location and strategic access will drive significant demand from a diverse range of manufacturers and distribution companies.”

Charleston’s JLL is handling the leasing on the project, and Managing Director Lee Allen said Trinity Capital’s timing to build the industrial space is “spot on.”

“Interest in both Charleston and the port area is showing no signs of slowing, and there’s a notable lack of industrial supply,” Allen said in the release. “Tradepark East will attract a diverse range of manufacturers and distributors looking to take advantage of all that Charleston area has to offer.”

Frampton Construction is performing general contracting services at Tradepark East, while DMA Architecture out of Winston-Salem, N.C., serves as the design firm and North Charleston’s Reveer Group as the civil engineering team.