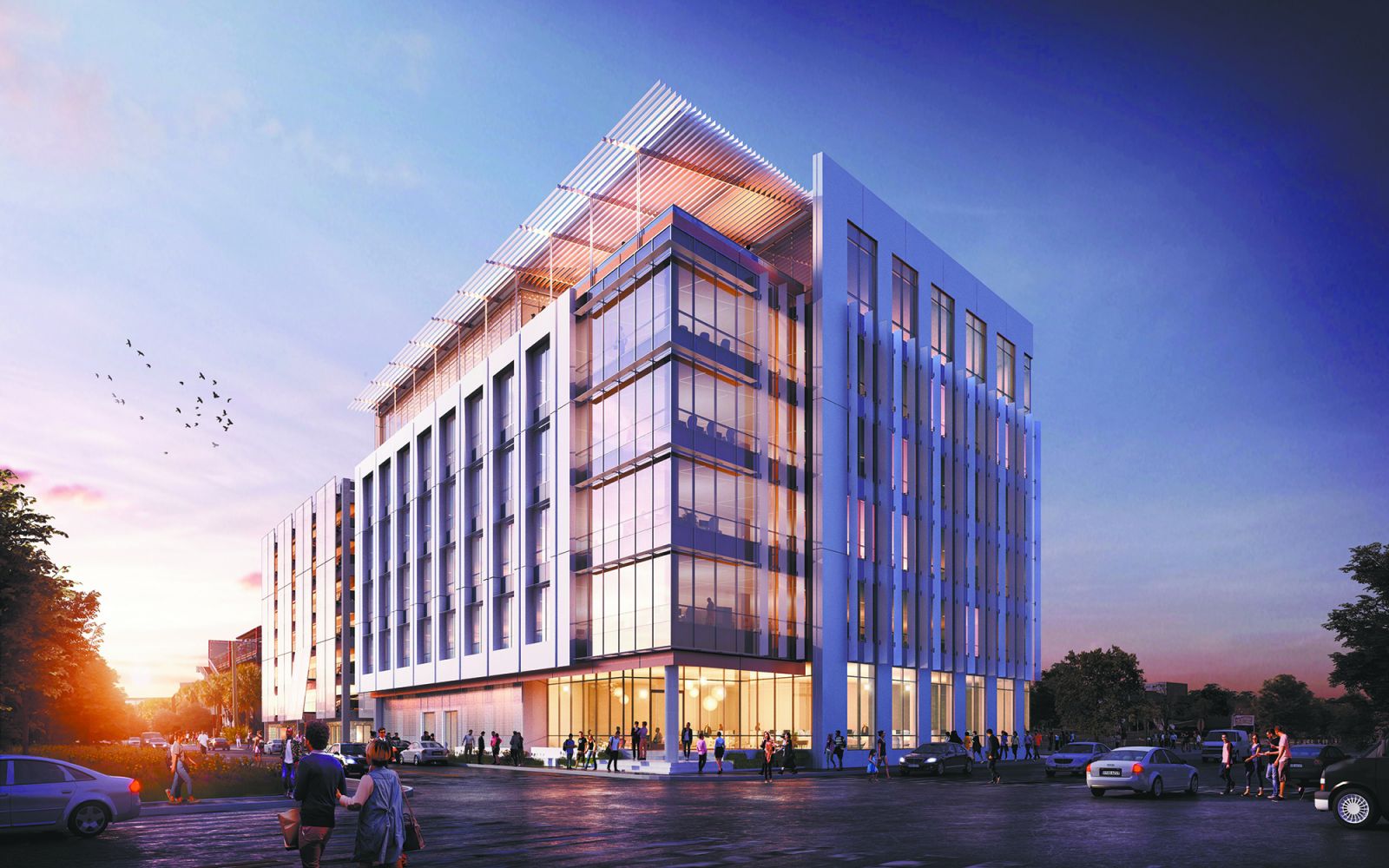 After years of planning, construction is underway on a six-story, modern office building designed to house numerous tech companies.
The project planners behind the Charleston Tech Center hope to fill it completely with large tech firms, startups and incubator space for growing companies. The project, located along Morrison Drive on the Upper Peninsula, is slated to open by late 2020.

Ernest Andrade, executive director of the Charleston Digital Corridor, said the tech-centric building will have office spaces for companies ranging from one-person startups to established software firms. Designs also call for retail on the ground floor, as well as an adjacent, small public park and a six-story, 800-space parking garage.

Andrade said the idea of having numerous tech companies in the same building will lend itself to tenants interacting — bouncing ideas around, troubleshooting issues or collaborating on projects. The newbie entrepreneur might learn from the seasoned executive.

“The fact that somebody starting out as a three-person team would have access to an established CFO or chief security officer or director of HR on the fifth floor over a cup of coffee in the same building — that’s very attractive,” Andrade said. “That completely breaks the barriers down. ... You don’t leave the building to gain knowledge.”

Iron Bridge Capital, a private equity real estate investment and development firm in Charleston, is the lead developer. The 92,000-square-foot project is being built on a gravel parking lot at 999 Morrison Drive, wedged between Conroy and Romney streets.

The site currently serves the Charleston Area Regional Transportation Authority’s downtown shuttle designed for hospitality workers; that service will relocate to an adjacent parking lot until it finds a permanent home, according to Charleston City Councilman Mike Seekings.

The property owner sold that site last year to be redeveloped into a 100-room Hilton timeshare development. The land sale prompted the corridor to temporarily relocate to the Flagship — Bridge space at 385 Meeting St. earlier this year as it awaits the opening of the new building.

Andrade said he envisions the new office project filled with burgeoning startups; growing tech companies in need of flexible space; and satellite operations of national tech firms wanting a downtown Charleston address. The corridor will also occupy a floor of the building for its Flagship operations.

Andrade said it could be a calling card for economic development agencies when recruiting tech companies: a place to show off as a potential office space and a hub of high-wage earners.

This will be the second industry-specific office project to open on the peninsula in 2020; the WestEdge development on Lockwood Boulevard includes a 150,000-square-foot building for medical, biotech and research companies.

The Charleston Tech Center project has been in the works for at least six years. The city bought the land for $1.8 million in 2013, and the Charleston Board of Architectural Review gave preliminary approval to the building designs in 2014.

Andrade said delays ensued, including getting investors and developers on board with a building focused on one industry. Fluctuating projections for construction costs and building designs added to the slowdown. The current design for a 92,000-square-foot building is double that of the original proposal.

The city will own and operate the adjacent park and parking garage once they are developed; it will lease the building’s land long-term to the corridor.

“The CDC has a 99-year ground lease that will be assigned to the private partnership” responsible for developing and leasing the property, Andrade said.

On the company’s website, Iron Bridge said the city’s garage made the investment less risky “whereby they (investors) will receive a significant portion of their capital back in less than 18 months, while preserving significant upside in the office building for either a long-term hold or sale upon stabilization, with anchor tenants already in place.”

Charleston City Councilman Gary White said the city wanted to partner with the corridor to facilitate growth in the region’s tech economy and help shape development on the Upper Peninsula.

White said that while the corridor and its foundation are separate from the city, it made sense for the city to buy the land for the private project to support economic development. He said the city would be open to similar arrangements if another organization has “a long-term track record of success in their ability to create high-paying jobs.”

“We wanted to make sure we controlled the land for many years to come,” White said, “and the building is geared toward growing the knowledge-based economy in Charleston and supporting the work that Ernest and the Charleston Digital Corridor has been doing. ... For the purposes of the city, it was all about economic development, and that’s really what it’s come down to.”

The city has pointed to the Upper Peninsula as a place for tech companies to cluster in high-density, mixed-use developments. To that end, Charleston City Council voted in 2014 to allow buildings up to 85 feet, up from 55 feet, in the tech overlay district along Morrison Drive.

The Raven Cliff Co. has acted on this vision in the area, building tech-focused projects Half Mile North and Pacific Box and Crate. The Charleston Tech Center will be another step in this direction.

“The city’s ability to leverage our resources in support of high-wage, technology-focused economic development is a win-win for our community,” Charleston Mayor John Tecklenburg said.