Affordability is the No. 1 issue facing multifamily housing in the Charleston area, and it’s going to take work from multiple parties to take on the problem, according to a panel of industry experts.

“I know various municipalities have made efforts to addressing this problem, but there’s still a great divide in terms of what the private sector can do to address that and what the public sector can do to provide a solution,” said Dan Doyle, senior vice president of development for The Beach Co.

Doyle, who was among four panelists at the Charleston Regional Business Journal’s Power Breakfast on Thursday in North Charleston, said municipalities need to provide developers with incentive to build and make the investment in affordable housing rather than just giving land to them.

Brent Case, president of Coldwell Banker Commercial Atlantic, said if given concessions, developers would be happy to build.

“Where we’re getting off base is ... this cannot be a problem that’s going to be solved by the developers and builders alone,” said Michael Holmes, president of Greenville-based Easlan Management, who sits on the executive committee of the National Apartment Association. “This is a national problem, it’s a problem we all share in.”

The panelists said rental rates in the Charleston area are being driven up by the high demand to live in the Holy City combined with the high cost of development and labor across the market.

Case said what people forget, though, is that it’s not just “Yankees” moving to the Charleston area; the community also has to contend with the organic growth of families already here.

There’s also a trend toward more people renting and less homeownership, which Doyle attributed to people delaying buying a house or older people downsizing from homeownership.

Holmes said that millennials want to be more mobile than previous generations, jumping from job to job and city to city, and that renting provides mobility and ease. 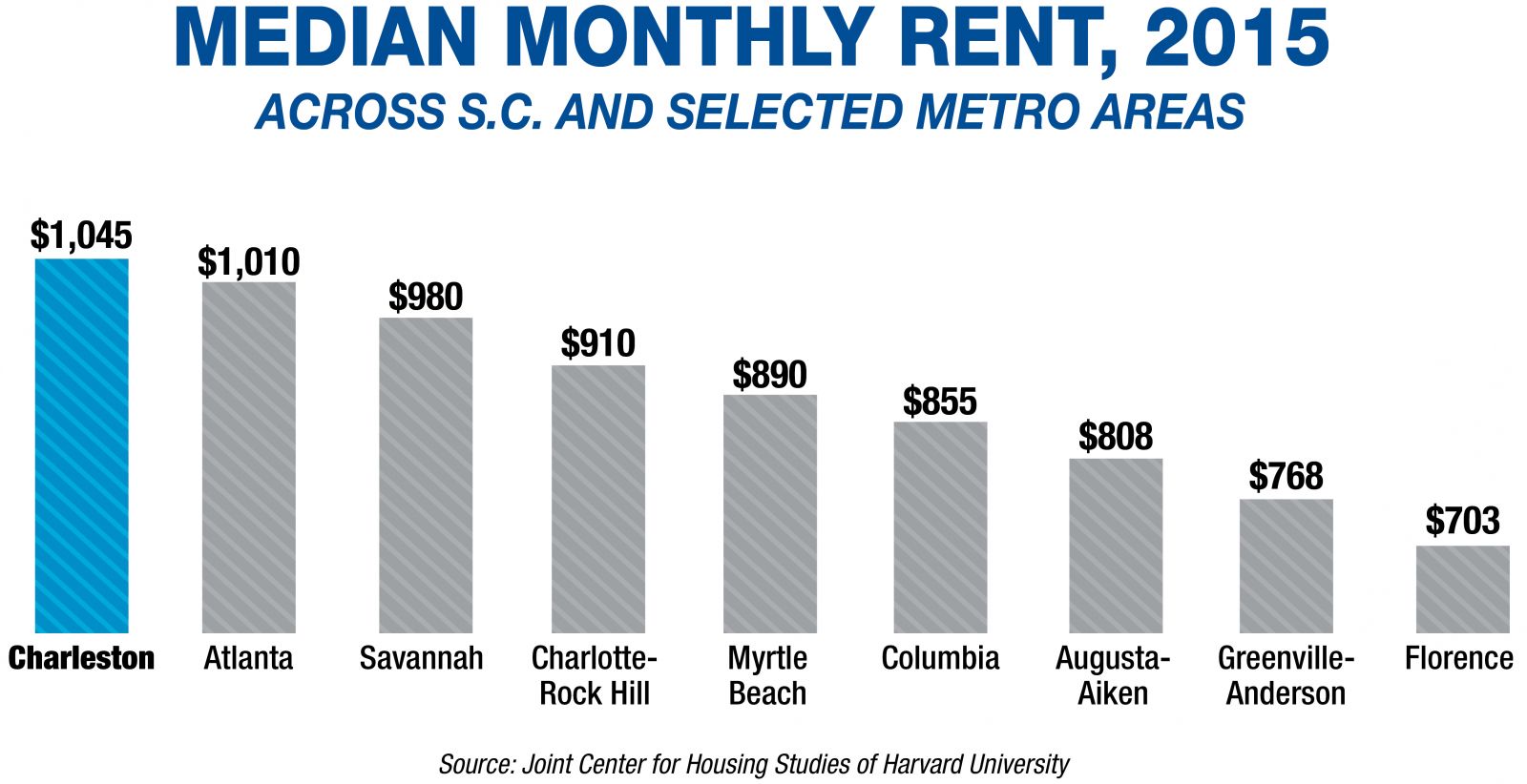 Charleston has the highest median rental rate in South Carolina and among southeastern cities such as Atlanta, Charlotte and Savannah; Doyle attributed that to the difference in size between Charleston and the larger markets.

“When you look at the other markets ... the size of those markets and the supply that already exists in those markets are considerably larger than we have in Charleston,” Doyle said, meaning that those markets have more opportunity for price fluctuation among different neighborhoods and developments that are already established.

A question was raised about whether Charleston’s smaller market meant more volatility, which Doyle denied, saying job growth in the area is strong, as is in-migration of population to the city.

Developers need to make sure they’re meeting demand, because all units will get absorbed at a certain price point, even if, as one audience member asked, another recession hits.

“Don’t forget the lenders that are looking at this picture too,” Holmes said. He added, “They’re kind of watching that even now — I’m hearing tales of people finding a little more difficulty on the loan side. But right now, Charleston is hot.”

Rusty Porter, vice president of preconstruction services at CF Evans Construction, said one of the biggest obstacles for developers is finding enough labor to meet demand. Developers and construction companies across the country are having trouble finding enough workers.

“Right now, we’ve seen such a surge here in the market locally that finding enough folks that can come in here and build it has become such a challenge,” Porter said. “You can’t seem to bring enough people at this point to be able to fill all the needs we have from the labor side.”

Case pointed to available bank financing as another obstacle to meeting demand for multifamily housing. Doyle said that policies from lawmakers in Washington, D.C., including the Canadian lumber tariff, create obstacles and raise prices on supplies.

One of the concerns of a construction boom is maintaining quality while meeting demand, which was exemplified by the closure of the Flats at Mixson apartments two years after they opened.

Case said anytime there’s a boom, mistakes will be made, but he added that government requirements ensure better products than those of 30 years ago. Porter also said bringing in the right experts early on helps ease problems down the road.

Doyle said the next hot spot for multifamily housing could be Summerville and North Charleston, because “that’s where the jobs are,” but it will depend on affordability — both of the units and of the land to build on.

“What you have to do when you’re looking at doing apartment development is, ‘Where is the infrastructure: Where’s your water lines, where are your sewer lines?’” Case said. “That’s going to greatly affect where’s your available land.”

Maybe I am missing something. What exactly are they recommending as potential solutions? Did anyone expound upon the "concessions" that would make developers happy? Does anyone else feel this panel seems short on ideas?