Commerce puts 4 Navy base buildings on the market

Four buildings on the former Navy base in North Charleston are being packaged together and sold by the S.C. Department of Commerce. One of the buildings, though, is valued at negative $1 million, cannot be torn down and requires millions of dollars’ worth of renovation work.

In late January, the State Fiscal Accountability Authority gave permission to the S.C. Department of Commerce’s Division of Public Railways, commonly known as Palmetto Railways, to sell three Storehouse Row properties that are being mostly used as office and warehouse space and the Power House, which has been vacant for two decades. 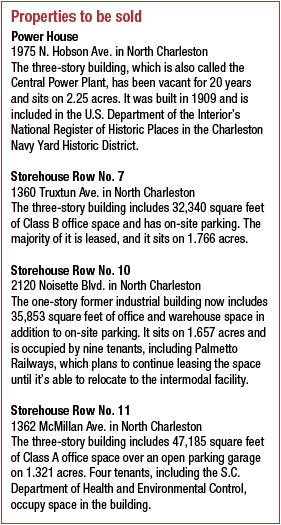 The Storehouse Row properties — No. 7 at 1360 Truxtun Ave., No. 10 at 2120 Noisette Blvd. and No. 11 at 1362 McMillan Ave. — were collectively appraised in January for $9.4 million, according to a letter from Commerce Secretary Bobby Hitt to the State Fiscal Accountability Authority and the S.C. Department of Administration.

Palmetto Railways and Charleston-based real estate developer Greystar purchased 240 acres of Navy base property out of foreclosure in 2010. The Noisette Co., which had been trying to redevelop the base as an urban core for the city of North Charleston, lost the property after defaulting on its loan during the Great Recession.

Three years later, in 2013, Palmetto Railways purchased the remaining 50 acres of the former Noisette development for $10 million. The three Storehouse properties it is now looking to sell were worth about $6 million of that deal, Hitt’s letter said.

Around that time, the deteriorating Power House, which Hitt called “the most prominent and architecturally significant building on the former Navy base,” also changed hands.

The Power House, located at 1975 N. Hobson Ave., was built in 1908 and is included in the U.S. Department of the Interior’s National Register of Historic Places in the Charleston Navy Yard Historic District. It was appraised in January for a negative value of $995,000.

Palmetto Railways acquired the Power House through a settlement agreement with the city of North Charleston in 2012. The city was against the state’s plan to build rail lines through the former base as a part of its Intermodal Container Transfer Facility and had sued alleging violation of a 2002 memorandum of understanding between the city and the S.C. State Ports Authority.

In the settlement agreement, the state received about 50 acres of city property, including the Power House, and the rights to the land needed to build its rail lines; the city received $8 million and 104 acres of state property.

The settlement allowed Palmetto Railways to focus on industrial and economic development while the city could focus on residential and recreational-use properties, the letter said.

Now that Palmetto Railways is finishing up its environmental impact statement process with the U.S. Army Corps of Engineers, Charleston District, to build the intermodal facility, the four properties are no longer needed, Hitt wrote. So the division is classifying them as surplus properties and putting them on the market.

The Storehouse Row properties are currently in use and have tenants, but the Power House is not marketable as a standalone property “because of the significant costs associated with rehabilitation to make the space usable,” Hitt wrote.

“The only party who previously expressed interest in the Power House walked away when a 2015 estimate determined that it would take over $15 million to rehabilitate the building to turn it into office space,” Hitt said in the letter.

Because of that negative value, Palmetto Railways intends to market the four properties together and accept only a buyer who has the qualifications and ability to restore the Power House, which Hitt said “will continue to deteriorate and become a larger liability unless it is restored.”

The asking price for the properties was not disclosed. The three Storehouse Row properties will be offered at a fair market value, and the Power House will be sold with some consideration for the condition of the building, the letter said.

A clause would also be included in the deed saying that if the new owner doesn’t rehabilitate the Power House, a public entity — which could include Palmetto Railways, the Charleston Naval Complex Redevelopment Authority or the city of North Charleston — would regain the building’s title. Hitt’s letter did not specify the amount of time the new owner will be given to make the renovations.

If the buildings are sold, Palmetto Railways plans use the proceeds to fund the intermodal facility and other, unspecified rail projects.

“Palmetto Railways will receive the benefit of replenishing its funds needed for rail projects, and the local community and state will benefit from the preservation of a historic property and return of that property to productive, taxable use,” Hitt wrote.

Palmetto Railways has already been approached by a buyer who is interested in purchasing all four properties and has a track record of doing the kind of rehabilitation work that will be necessary, according to Hitt’s letter. The potential buyer was not identified.

“The potential buyer has a favorable relationship with the S.C. State Historic Preservation Office and DHEC (Department of Health and Environmental Control) and proposes to restore the Power House and return it to the tax rolls by financing the project with available state and federal tax credits in combination with the acquisition of the revenue-producing Storehouse Row properties,” Hitt wrote.

Vapor Apparel, a performance apparel manufacturing company, has leased its headquarters space in Storehouse Row No. 10 for about 11 years, said co-founder Chris Bernat. About 45 of its employees work in the building.

“As far as anybody who is coming in to acquire the building, I imagine that they would want us to be here, considering at this point, we rent more than half the building,” he said.

Bernat said he’s in the process of expanding further into the building to accommodate the company’s IT and e-commerce work and added he’s not concerned about new building ownership.

“I think that whoever would be potentially acquiring the building is going to be looking to keep the inhabitants of the building running in here,” he said. “It’s not something we’re really, tremendously worried about.”

North Charleston Mayor Keith Summey said he supports Palmetto Railways’ plan to sell the properties and renovate the Power House. The city owned the Power House before Commerce, having acquired it from the federal government after the Navy base closed. The city had once hoped to renovate it into a performing arts center, but the cost was too high, Summey said in a letter to Hitt.

“My understanding is that Palmetto Railways has received an unsolicited offer from a buyer who the city knows well and who has successfully completed historically significant projects in Charleston and North Charleston, one of which is currently underway,” Summey wrote. “This is exactly the type of buyer we need to rehabilitate the iconic Power House.”

Kelly Coakley, public information director at the S.C. Department of Administration, said the department is working with real estate broker CBRE to structure a bid process (.pdf) for the four properties, which have been posted for sale on CBRE’s S.C. surplus properties website.

This story originally appeared in the Feb. 20, 2017, print edition of the Charleston Regional Business Journal.