Glenn has taught strings students of all ages in the Charleston area since 2005 and has performed with the Charleston Symphony Orchestra, the North Charleston POPS! and with Mannheim Steamroller, Michael Bublé and Michael W. Smith among many others, according to a news release from the orchestra. 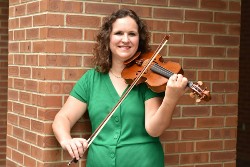 “When I was a student, each new orchestra I joined was a stepping stone to the next level. At first, I would struggle to keep up,” Glenn said in the release. “But with practice and determination, my playing advanced. The orchestra pushed me to become a better musician because I had to learn to stay with the group.”

Glenn stepped away from conducting and teaching when her twins — a boy and a girl — were born and is thrilled now to be in a position to reengage, the release stated.

“I love conducting and leading orchestra rehearsals. The Summerville Orchestra Youth Philharmonic will be a wonderful opportunity for students to make new friends while at the same time developing their musicality,” she said. “Playing in an ensemble teaches students to work as a team and also helps them form other life skills. Plus, involvement in extracurriculars also looks impressive on a college application.”