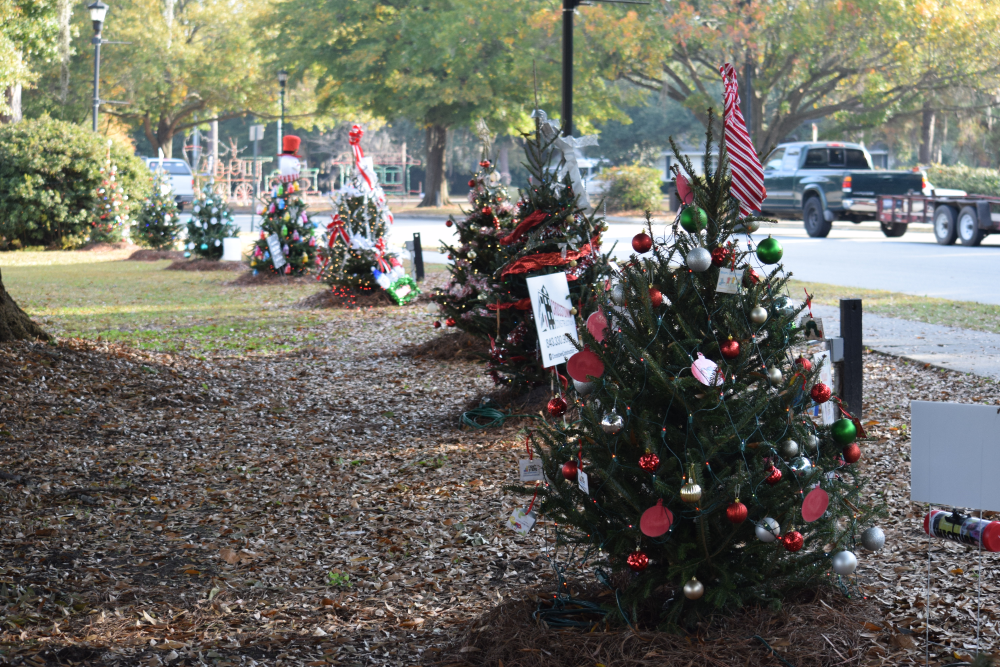 Christmas trees are a festive symbol of holiday fun for most.

But for the Delancey Street Foundation, Christmas trees save lives.

Dubbed the “last house on the block,” Delancey Street is a residential self-help organization for former substance abusers, ex-convicts, homeless and others who have hit bottom and have nowhere else to turn.

Set up in five states after first opening in San Francisco in 1971, Delancey Street has operated a house in North Charleston for the last decade, taking in individuals and helping them turn their lives around with vocational training, basic work habits, community involvement and employment.

Some of those jobs include selling Christmas trees every December on the organization’s temporary lots in Park Circle and in the West Ashley Target parking lot.

Actually, the job is more of a privilege if you ask Delancey Street resident, Eric Meek.

This year, Meek is manager of the Park Circle lot, while fellow resident Harold Barnhardt runs the West Ashley location.

“This is more or less a fundraiser for us because we take no money from the state,” Barnhardt said. “We’re self-supported. We work. We’ve got jobs.”

Each year, Delancey Street sets a goal of selling 1,200 trees from November until Christmas — or until they sell out. Their trees in particular are purchased for community decorations in North Charleston City Hall, around Park Circle and in Old Navy Base homes, such as the Admiral’s House.

Finding that many trees, especially larger ones, was a challenge this year and as a result, prices have nearly doubled, but the lots are still as busy as ever, Barnhardt said.

West Ashley resident Aimee Lassor has supported Delancey Street for years, first learning about the program through the organization’s moving company, which it runs in addition to landscape operations.

“I feel like most of the tree places, they’re running a business. It’s just about selling the trees, and the money is a profit to somebody,” she said. “There’s nothing wrong with that of course, but when Delancey is selling trees to give back to this program that’s giving folks a second chance to be productive citizens, I definitely feel that’s important.”

In addition to raising funds, tree sales create connections and provide networking opportunities for residents, Meek said. Many people who visit the lots have never heard of Delancey Street. Some leave offering residents jobs or even recommending someone who needs the program.

“It’s great interacting with the public, the community, especially because Charleston supports us a lot,” Meek said. “We get a lot of people that come through the lots, just people we’ve done jobs for, but a lot of people come and just learn about us for the first time.”

Delancey Street residents include teenagers, senior citizens, men and women of all ethnicities. All have nowhere else to turn and a history that may have been written from drug and alcohol abuse or time in prison. Many are unskilled, functionally illiterate and have a personal history of violence and generations of poverty.

Residents stay a minimum of two years, while the average member remains for four years, drug, alcohol and crime-free.

“We take homeless, drug addicts, ex-cons, people out of prison. Just people that want to change their life. People down their luck,” Barnhardt said. “We like to say we’re the last house on the street. If you’ve got nowhere else to go, you usually want to go there.”

That’s where the slogan of “Buy a tree, save a life,” comes from he said. “You’re helping change a life.’”

About 90% of the 40 residents in the North Charleston house have come from jail or a court order, Barnhardt said. And each have various roles in the house. As an elder and third-year resident, Barnhardt has 17 residents under him who he mentors.

Delancey Street’s mottos is “each one, teach one,” meaning each resident is responsible for learning something and paying a lesson forward, Meek said. Residents start at the bottom and work their way up, learning from more experienced residents, whether it’s how to fix cars in their automotive space, how to work in a restaurant or how to wield a hammer for the first time.

Through the program, residents receive a high school equivalency degree and are trained in three marketable skills. Since most have never held jobs, they also learn basic work habits, such as showing up on time, listening to a boss and getting along with coworkers.

Residents additionally learn essential social and interpersonal skills that will help them to live successfully in the mainstream of society upon leaving.

A skilled tradesman before he arrived at the house, Barnhardt said being a part of Delancey Street gave him structure and confidence — and a relationship with his family again.

“Living the lifestyle I lived, doing what I was doing, it took me away from everything. I lost a lot of confidence in myself. I just lost who I was. Delancey Street basically built me back up, gave me a life, gave me a chance,” he said. “I used to like to say when I’d walked up to people’s front porch, they’d cut the lights off and act like they weren’t home. Now they call to check on me to see how I’m doing.”

Stories like Barnhardt’s add support to Delancey Street’s mission when they buy trees during the holidays.

“I’m a big believer in second changes, and I feel like it is a really cool thing to give people who had limited employment opportunity a chance,” Lassor said. “It’s wonderful to support them.”