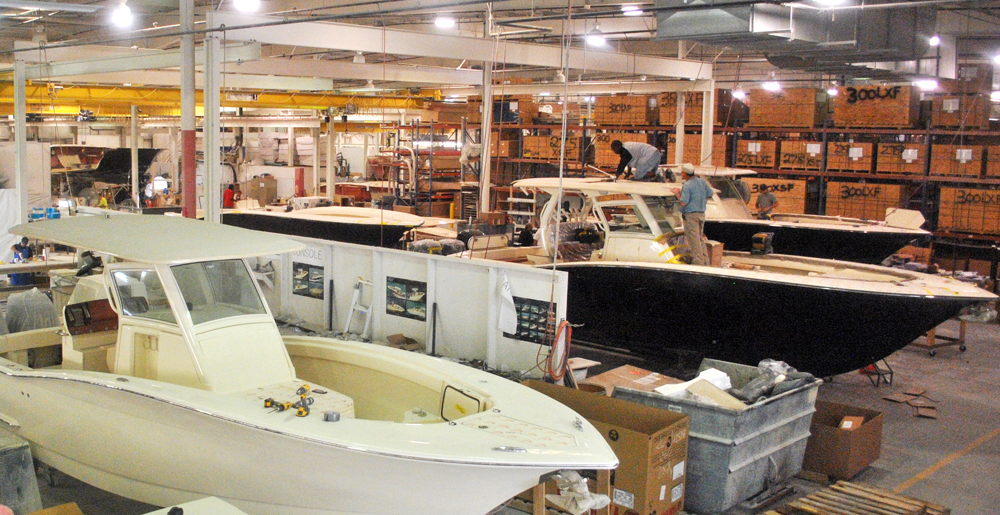 His love for boats stemmed from his teenage years in Charleston in the 1960s, when he devoted many of his nights and weekends to learning the craft of building them. Potts eventually decided to go into business for himself, launching Scout in 1989.

“Building boats has just always been a passion for me. ... It had always been my dream to do my own thing,” Potts said. “I learned what not to do by working for other people.”

He began by building 15-foot models and selling them to dealers across the Carolinas. The product line grew to include bigger boats, and the customer base expanded to other states. Soon, the company needed more room to build its luxury coastal fishing boats, and Potts moved operations into a 2,400-square-foot facility. 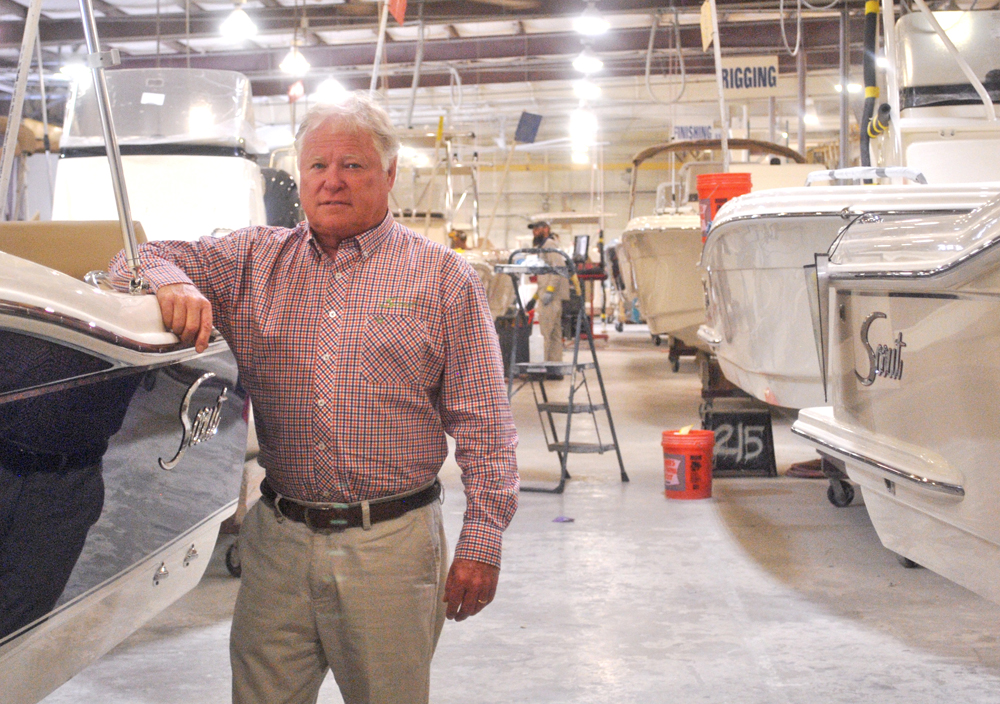 Today, Scout Boats employs 350 people in a 220,000-square-foot facility that sits on about 16 acres in Summerville. Scout Boats are sold by more than 70 dealers across the United States — with a strong following in the Southeast and Great Lakes areas — as well as internationally. Canada is the company’s No. 1 export market, followed by Mexico and Australia.

“We started out as a small boat builder,” Potts said. “We have grown very steadily ever since.”

Scout is now preparing to build its largest boat to date, a 53-foot yacht, surpassing its 42-footer. The new model requires another company expansion, following a $2.5 million investment in 2014 to add 30,000 square feet of manufacturing space.

Scout Boats plans to invest $11 million to build a 100,000-square-foot facility — large enough to house production of the bigger boat — and hire up to 320 people. The money will also be used to establish a 20,000-square-foot product development and engineering building. The facilities will be built on 12 acres near Scout Boats’ existing operations along U.S. Highway 78 West.

The 53-foot model can cost up to $2 million, depending on the buyer’s customization requests, and will take about a month to produce.

Tooling has started for the new model, and production is slated to begin in April 2018. Recent sales include a buyer in Turkey and a royal family in the Middle East.

Nationally, boat deliveries are typically done via truck; most boats headed overseas are shipped through the port in Jacksonville, Fla. Potts said he expects the 53-foot yacht to be delivered to customers via water.

“We have people buying our boats that can buy anything in the world,” he said. “When we ship a boat halfway around the world, that’s something to be proud of.”

Former Gov. Nikki Haley focused heavily on recruiting manufacturers to the state. The state Commerce Department planned recruiting trips around the world to market South Carolina as a place to put down manufacturing roots, and amenities like lucrative incentives packages, available land and proximity to the Port of Charleston helped sweeten the deal.

Boeing S.C. continues to increase production at its North Charleston site, which employs about 7,000 workers, many of whom build 787 Dreamliners. 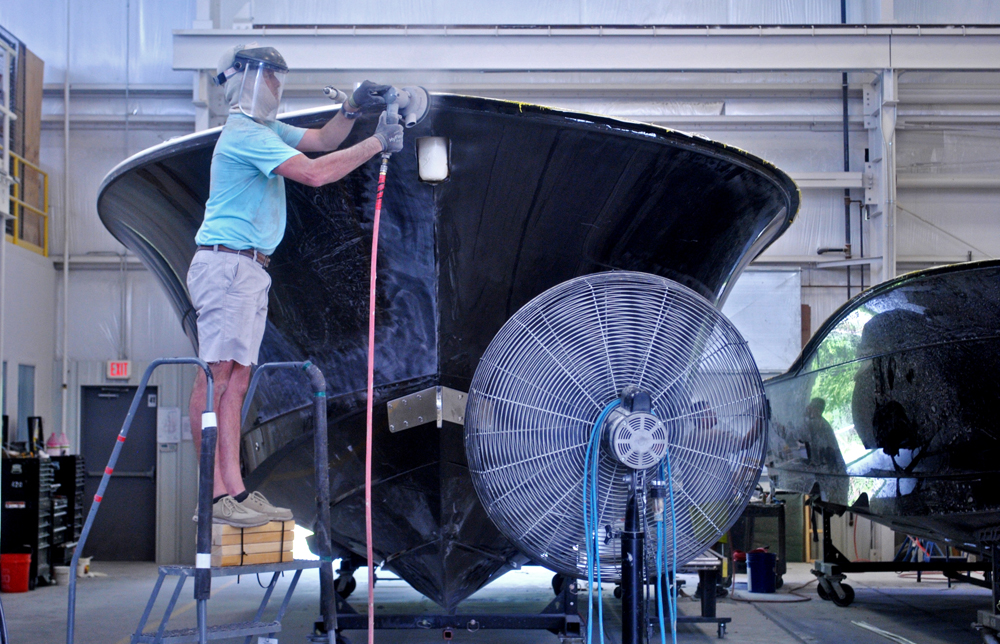 “I have definitely seen the pace pick up in recent years. ... We have come into our own. We are building very complex pieces of equipment. ... We build the most complex consumer products in the world here,” Hitt said.

As BMW hits 25 years of manufacturing in Greer, Hitt reflected on the automaker’s progression. BMW made 35,000 cars in its first full year of operation; the plant now produces around 1,400 cars a day. The company continues to expand in the Upstate.

The manufacturing sector “has grown up bigger, faster and more complex than we thought. ... The reason the world comes to our door now is that those men and women in the plants and their capabilities are producing those complex consumer products, like a BMW. It the best advertising we’ve ever had.”

Mercedes-Benz Vans needs to hire 1,300 workers for its expanding van manufacturing campus in North Charleston by the end of the decade. Volvo Cars plans to hire at least 2,000 people by 2018 to build its new S60 sedans in Berkeley County. The bulk of production hiring is expected to ramp up this fall at the Sweden-based, Chinese-owned automaker’s new S.C. campus.

Potts said it is becoming more difficult to find skilled builders capable of doing the work to build his boats.

“It’s a craft. All these boats are built by hand. The nature of our industry is very labor-intensive,” he said. “When you have the Boeings of the world and the Volvos of the world that come in, the same sort of people they’re going after, we’re going after, so it becomes a little bit of a challenge to compete, but we do compete well. It’s a different business model and it’s a different culture here.”

Infrastructure issues and workforce shortages continue to be a struggle for companies once they open up shop in the state. Many companies are left recruiting employees from out of state, and sometimes beyond the Southeast, to fill positions, manufacturing executives have said.

Hitt said the state wants to help companies find and train enough workers to fill the jobs being created, including through its ReadySC and apprenticeship programs. He and Gov. Henry McMaster traveled the state recently to hear from manufacturers about their workforce gaps.

“Companies want the best and the brightest,” Hitt said. “They need a workforce that’s ready.”

This story originally appeared in the June 12, 2017, print edition of the Charleston Regional Business Journal.