On the first floor of 1630 Meeting St., at the upper end of the Charleston peninsula, one of the region’s only nonprofit law firms handles its caseload, attempting to bridge the gap between free legal services and private law firms.

Charleston Legal Access was founded in 2016 by Sally Newman, who realized it can be difficult for low to moderate-income people and families to afford private legal services.

The S.C. Bar provides free legal services up to 125% of the poverty line, with exceptions sometimes made up to 200%, according to Elliott Tait, a staff attorney at the Charleston office of S.C. Legal Services. 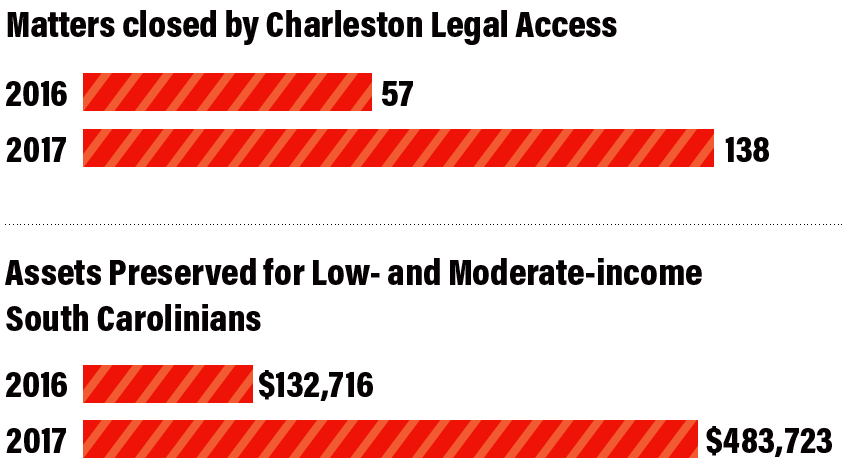 “So we kind of pick up where Legal Services leaves off, specifically, and go up to 400% of the federal poverty line,” said Adair Boroughs, executive director of Charleston Legal Access.

The nonprofit determines rates based on a client’s ability to pay. Boroughs said the nonprofit’s rates are usually between $50 and $100 per hour, about one-half to one-third of private law firm rates.

Charleston Legal Access’ services are funded by a combination of donations, grants and client fees. In 2017, 65% of the firm’s legal services were supported by donations and grants, according to the nonprofit’s annual report. Charleston Legal Access primarily serves the tri-county region, and its only office is in the Lowcountry, but the law firm has also done work in the Columbia area. Boroughs said the goal is to eventually open offices in other parts of the state.

“Two-hundred percent of poverty ... is not very much money,” he said. “It’s impossible for folks that are at, you know, 205% of poverty or 300% of poverty to hire a lawyer, especially in a more complicated matter.”

Charleston Legal Access is one of the state’s first sliding-scale law firms.

Boroughs said the attorneys currently don’t have the right experience to assist in these cases; another reason is that they want to take cases where they can have the most impact.

It’s unethical for two attorneys at the same law firm to represent opposing parties in a case, according to the American Bar Association.

One example, Boroughs said, is a man who lost everything in an apartment fire but the apartment’s management company refused to submit an insurance claim on his behalf. Having a lawyer in that scenario shifted the balance of power, she said, and allowed Charleston Legal Access to resolve the case in relatively little time.

Boroughs said since the law firm began, it has helped preserve over $800,000 in assets for its clients.

“We’re very focused on the impact of our work and how much we’re able to help families with financial stability and healthy living and those kinds of things,” she said.

When Newman founded Charleston Legal Access, she was the only staff member, but the law firm has grown to include three attorneys and an intake manager, as well as volunteer attorneys who assist with client intake.

The firm is currently looking for a fourth attorney. Boroughs said she tries to match outreach for the law firm with its ability to take on new cases. Right now, the firm isn’t doing much outreach because it has reached capacity.

Boroughs said that other law firms in the area have been supportive of the nonprofit and that most of Charleston Legal Access’ cases are referrals from private attorneys.

“The private law firms in the area have been really great about being supportive of us,” she said. “They clearly understand the need ... and frankly I think they like having a place to refer those clients that have meritorious claims and they just can’t afford private market rates.”