The real estate investors swooped in three years ago to purchase the distressed building and breathe new life into it, repositioning it as the Epic Center Planned Unit Development (.pdf) — a mixed-use facility that would bring industry centers and employment opportunities for higher-paying jobs into West Ashley.

Currently, 84% of the area’s residents commute outside of the city for work, according to a Charleston City Council study (.pdf).

Ginger Davis, investment coordinator for Trademark, said the company spent years tracking the West Ashley corridor and felt the mall was an asset that could truly transform the community. 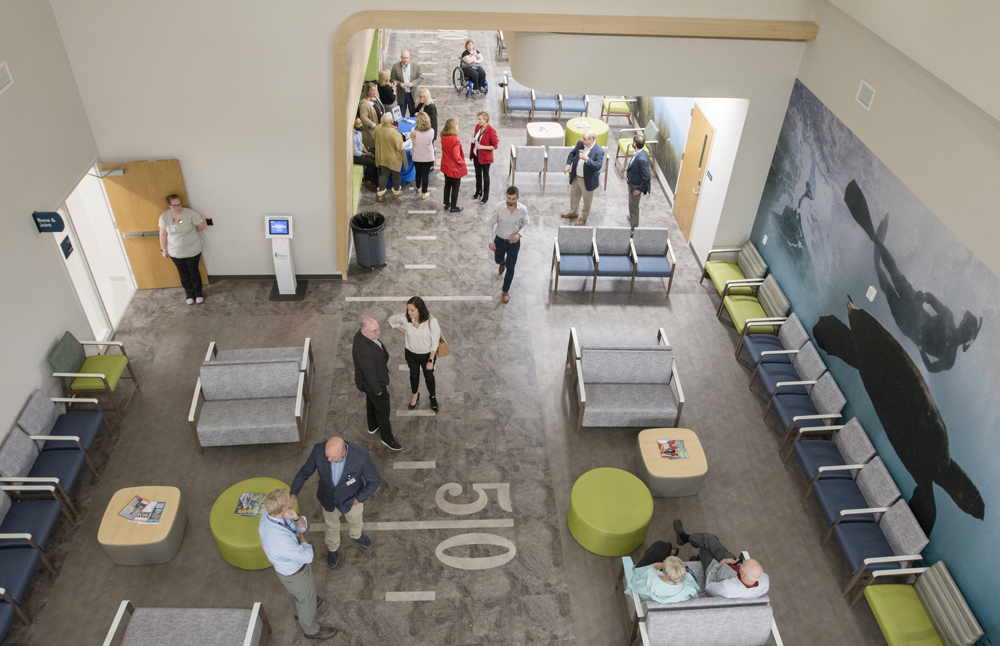 Proposed ideas that would bring additional use to the mall and serve as economic drivers include a hotel, retail, a sports and entertainment arena, a transportation hub and residential homes for a diverse range of income levels, with a special focus on workforce housing.

MUSC’s West Ashley Medical Pavilion, located within the former J.C. Penney store, was the first major construction project for the Epic Center and created jobs in the area when it opened in January.

Davis, who handles commercial real estate and leasing for the mall, is looking to bring in other sectors, such as finance and technology, to do the same.

She hopes the newest tenant, The Harbor Entrepreneur Center, will be a tech springboard.

Through its six years, the nonprofit organization has supported the growth of more than 200 companies through its entrepreneurship programs. It will open a shared 6,256-square-foot workspace inside the former Express clothing store.

The Harbor has a second, 10,000-square-foot location at 65 Gadsden St. in downtown Charleston.

Founder John Osborne previously served on the West Ashley Revitalization Committee and was drawn to the long-term vision and activity of the Epic Center. The space aligned with Harbor’s previous locations, in Park Circle, Upper King Street and Pacific Box and Crate — all up-and-coming spaces that were at one point underutilized.

Osborne had been in talks with Davis, as well as Trademark Properties President and CEO Richard Davis, for years about relocating his organization.

“It usually becomes a good partnership with the developers and owners because we bring high activity to an area, and once it’s in high demand, we go to another spot,” Osborne said. “The last thing we want is to compete with entrepreneurs to fight for prime space. We’ll get out of the way — that’s counter to our mission.”

The Harbor’s new home will be fitted with dedicated desks, a classroom area for instruction, private offices and float spaces, all safely set up for coronavirus precautions. The intention is for short-term, collaborative needs, with daily passes and monthly memberships.

“The fact that they made the step to come over here shows that we’ve evolved to a place where it’s a good fit,” Ginger Davis said. “But it’s going to take a lot of like-minded people that think this way. One tenant won’t do.”

Retail will remain a strong component of the final Epic Center plans, but it won’t be the biggest element. Ideally, Davis said she wants to see locally owned retail come in, in addition to Belk, Target and Dillard’s, which own their own spaces and are stakeholders in the project.

“We won’t do anything there that they’re not involved in, approving and on board with. Our goal is that anything we do here should improve their business and their site,” she said.

With HBO leasing the former Sears shopping center, Davis said there also will be a focus on building out a creative campus, including production facilities and additional studios for smaller productions.

Comparisons have been made between the redevelopment corridor and Mount Pleasant, but Davis thinks the two stand alone with West Ashley’s eclectic feel and diversity.

“It’s important to the neighbors that we retain the culture and character because we have so much in West Ashley,” Davis said. “That’s one of the reasons we wanted more density in this place, because it doesn’t encroach on neighborhoods.”