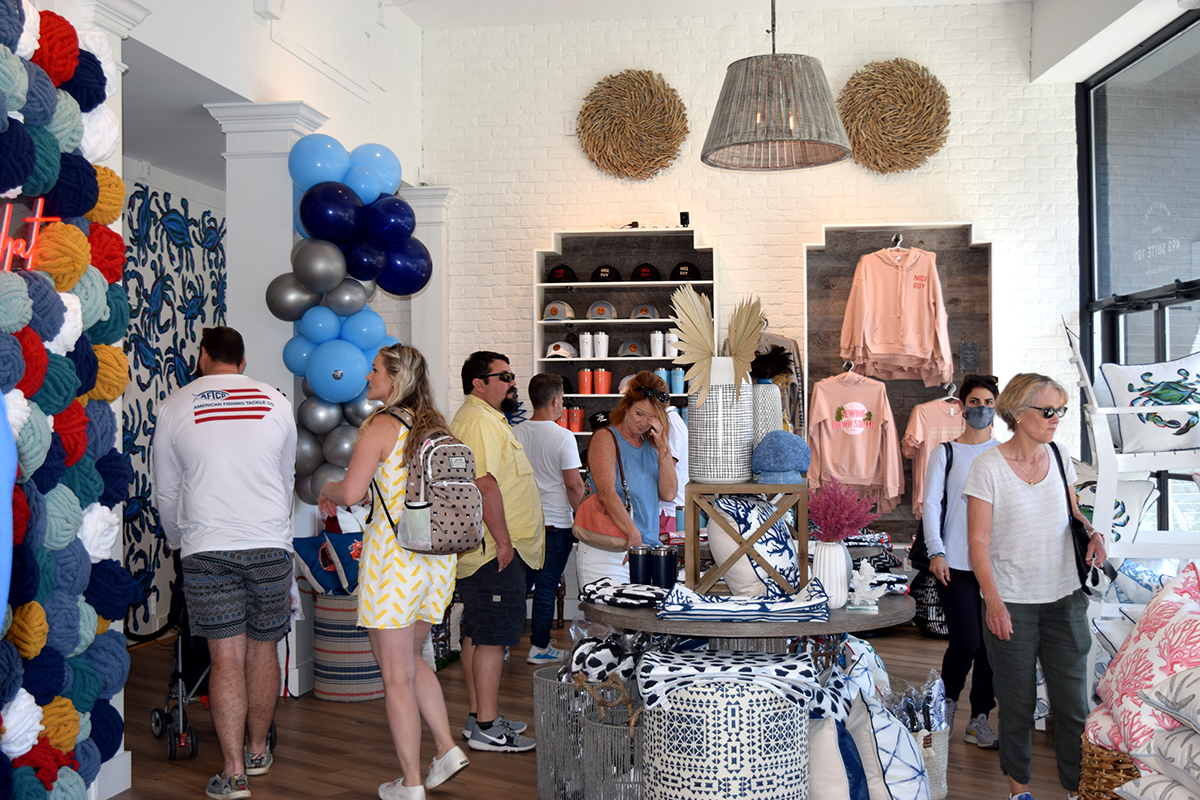 Star of Bravo TV’s Southern Charm, Craig Conover knew nearby businesses were hesitant of him opening Sewing Down South, a homegoods store on Upper King Street. Traditionally, the area has been heavily focused on food and beverage businesses, and nerves were high what kind of traction a reality star would bring to the hometown neighborhood.

But John Fosco, owner of CBD Social a few doors down, sees the value in what Conover’s store brings and welcomes the retail shop and its owner — a quirky combination of reality TV star, entrepreneur and lawyer at Mount Pleasant’s Conover Law Firm.

On May 15, Conover and his business partners Jerry Casselano and Amanda Latifi opened the doors to their 493 King St. shop, and by proximity, CBD Social recorded its highest day of in-person sales, Fosco said. 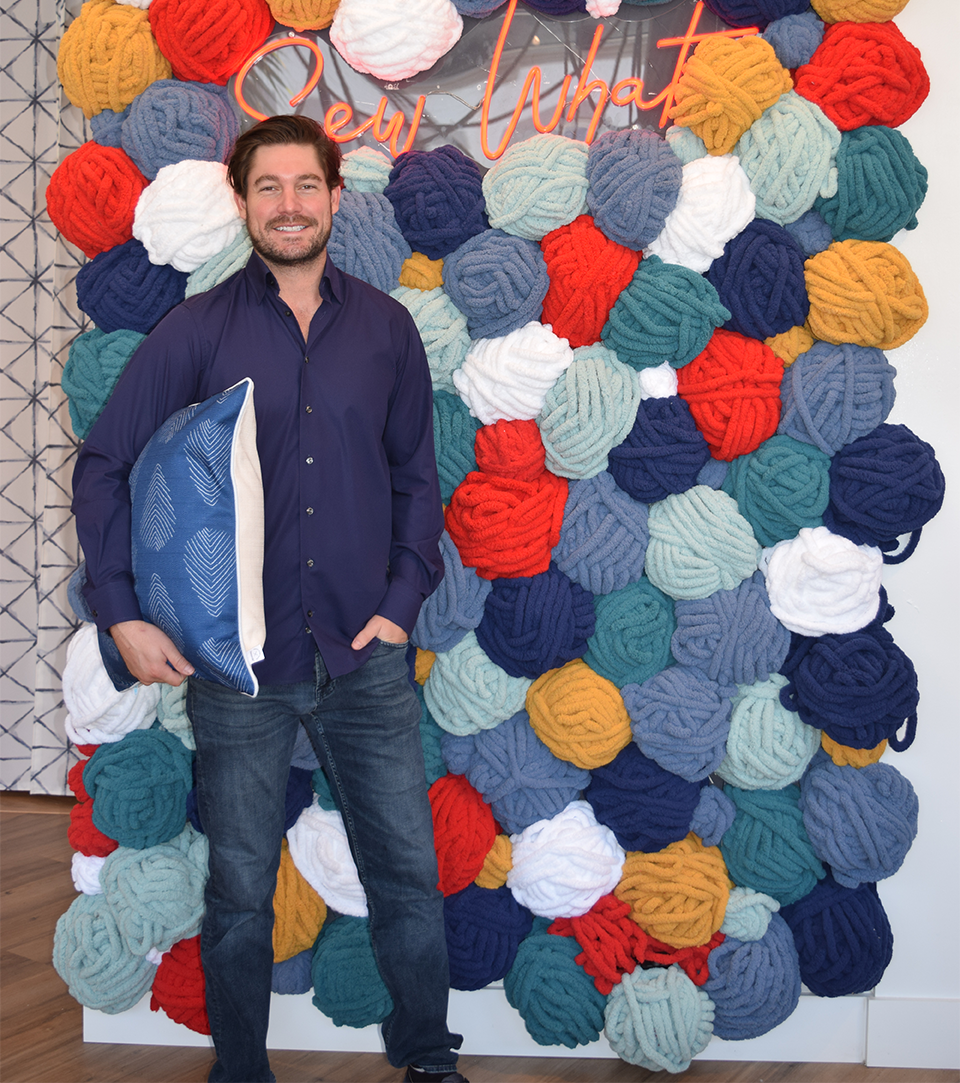 “The lines were so long all day that whether people got interest at the end of the line or saw us when they were standing in line and stopped by after, they came to our store,” Fosco said. “We typically do online sales, but from a walk-in standpoint, I’m pretty sure that was our biggest day ever.”

Fosco calls Sewing Down South a perfect combination of a tourist destination bringing people to a specific area, and then by proxy benefitting neighbors.

“I think it’s great that there’s a place where they can see someone they associate with the city that they admire, who’s leveraging their name and brand to put out a quality product,” Fosco said.

Sewing Down South built a business on custom pillows, inspired by the reality star’s own hand-sewn creations. But customers can visit the store to also pick up candles, apparel, home décor, baby gear and more. Conover describes the products as high quality without pricing out his customer-base.

Down the line, Conover sees further collaboration of new products with area businesses, creating custom goods, such as kitchen aprons and spatulas for nearby restaurant Raw 167 and leather goods with neighboring company J. Stark.

Your future isn’t always what it seams

Sewing Down South was two years in the making. Conover initially launched an ecommerce site as an April fool’s joke, but with the business’s growing popularity and a huge following that’s amassed 65,000 followers a week for its affiliated podcast Pillows and Beer, he and his team felt it was time to think brick and mortar.

Conover never imagined his first home goods store would be a 2,000-square-foot window-front on Charleston’s Upper King Street, however. He especially didn’t expect it to happen in the middle of a global pandemic.

But Conover was determined to follow through, especially in the face of those who doubted him.

“We want to prove that retail is not dead,” he said.

For 10 hours before he opened the doors of 493 King St., a line of shoppers stretched along Upper King the store’s first day. Customer traffic hasn’t abated with shoppers and reality TV fans rotating in and out from open until close, snapping selfies of themselves, and hoping to catch a glimpse of Conover.

“We’ve done great with ecommerce, but I just want to show that shopping can still be fun and experiential,” Conover said. “I want to make sure that instead of just ordering online, if you are able to, you can go to a store, you can see and feel the items.”

Conover said his love of the craft of sewing dates back to eighth grade. He took a home economics class and spent half the year learning how to cook and the other half to sew.

Conover developed a talent with a needle and thread immediately.

“Those classes meant a lot to me,” he said. “Sewing is a dying thing now, and it’s a shame there isn’t that curriculum in a lot of schools today.”

Though he didn’t dabble much in the hobby for the next decade or two, a breakup a few years back left Conover desperate for a creative outlet, and he took up the hobby again. Pillows have a simple shape so he tried his hand at making one. He surprised himself how good it came out.

Conover made a few more pillows and strategically placed them in the background of an Instagram post, gauging if anyone would pick up on his handmade crafts — or even like them.

He received a ton of positive feedback and that was all he needed to pursue the passion further. That includes an exclusive line for Home Shopping Network, a national Pillow Party tour and speaking opportunities that have brought him to national outlets as well as local schools. This spring, he spent a day at East Cooper Center for Advanced Studies in Mount Pleasant, discussing his rather unexpected career with students.

“Any sort of encouragement we can do, whether it’s helping someone who has a side hustle or doing something that’s not necessarily cool, I want to give back as much as I can,” Conover said. “We’re trying to illustrate that it is cool to do this stuff and step outside of your comfort.”

The entrepreneur understands his career could have been extremely different. Not long ago, he was heartbroken with three years of law school under his belt and no diploma. But he motivated students to pursue their passions, especially off a computer screen, and embrace any tragedies along the way. After all, the bumps in the road led him to opening his dream store in his dream location and being happier than ever.

“There’s bad stuff that’s going to happen with you in life, but hopefully if you keep plugging along you end up in a really good place,” Conover said.