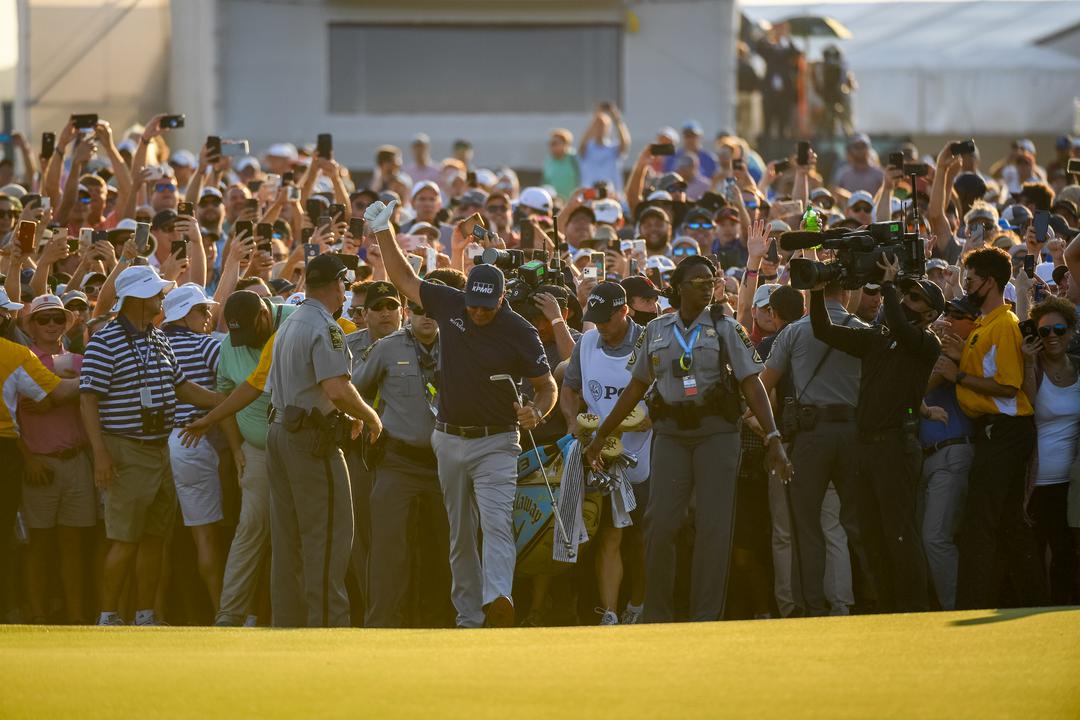 This article first appeared in the May 31, 2021 edition of the Charleston Regional Business Journal.

Phil Mickelson’s performance at The Ocean Course at Kiawah Island in late May won the 50-year-old pro his sixth major and the PGA Championship trophy. But the big winner might have been South Carolina’s economy.

The largest event to take place in-person in South Carolina since the global pandemic ground the world’s economy to a halt, the PGA Championship is expected to bring millions directly into the Charleston region and signify that things are getting back to normal.

Over time, professional sports events have become critically important to local and statewide finances as hundreds of millions of dollars pour into towns and cities through job creation, tourism and global exposure. Even with pandemic restrictions in place, the PGA showed millions of people that South Carolina was moving forward.

The state has grown beyond its historically minor league and college sports persona, beyond its status as only a recreational golf destination with its more than 350 courses and hundreds of year-round events.

In a time where fewer fans were attending events and people aren’t traveling as much, South Carolina will be showcased to more than half a billion households worldwide.

“I think that we as an industry here in South Carolina, specifically in Charleston and Kiawah, on our own, we couldn’t pay for the amount of quality exposure we get through the TV,” Warren said.

So far in 2021, the state has doubled its event tally with the PGA Championship, PGA Tour and WTA calling on South Carolina to host three additional tournaments.

In April, the Tennis Channel and WTA Media broadcasted the Volvo Car Open and MUSC Women’s Health Open tennis tournaments on Daniel Island to more than 170 countries. In late May, CBS, ESPN, the Golf Channel and other broadcast, cable and digital media platforms aired coverage of the 2021 PGA Championship to more than 175 countries.

On average, the PGA Championship media value generates more than $100 million for the host site and region, according to the PGA.

“This allows us to play with some of the larger states that we haven’t been able to before because we are a small state still,” said Duane Parrish, director of S.C. Parks, Recreation and Tourism. “But we have a lot to offer from the mountains to the sea, and golf is a big part of that.”

While the limited fan attendance has likely lowered the what-could-have-been 2021 impact — the originally estimated $200 million by the PGA Championship, for example, has since been halved — the exposure is still desperately needed for a state that relies on tourism.

“What we’re still going to see is people coming in and going to restaurants, using accommodations, heads in beds, so to speak,” said PGA Championship Director Ryan Ogle. “So there’ll still be a direct impact to the region.”

WTA Chairman and CEO Steve Simon said both the staff and players’ cherish their time each spring in Charleston because of the city’s “A+” hospitality and professionalism.

“The hospitality that’s provided and the warmth and everything else that comes with it just makes it a very special experience,” he said. “And we know that a lot of our players think Charleston’s one of their favorite stops of the year.”

Playing through the pandemic

He said at a press conference in April that “by seizing this once-in-a lifetime opportunity” and sponsoring a third professional golf tournament in a single year, the state is helping to lift up small businesses in the hospitality industry that have been devastated by the pandemic.

“This is great progress, and I expect that we will be seeing ourselves on television and in advertisements in sports channels wall-to-wall during the entire time of those three months,” the governor said.

At the tail end of that period will be the Palmetto Championship at Congaree, beginning June 10, which Parrish anticipates will bring in a further $50 million for the state. The revenue was unexpected as the tournament was a last-minute replacement for a canceled PGA Tour event in Canada.

Even with limited tickets available, the total impact from the Palmetto Championship is still double that from 2019 when the Country Club of Charleston hosted the U.S. Women’s Open and welcomed nearly 100,000 spectators. Charleston was selected as the official site of the 74th annual tournament, held May 30-June 2, 2019.

Like the Congaree golf tournament, the MUSC Health Women’s Open similarly came about after a pandemic-related cancellation. The Billie Jean King Cup tennis tournament held in Hungary was postponed until February, and the WTA needed to fill the calendar void. Simon said the Charleston team’s efficiency and dedication — not to mention the fact that Daniel Island already had infrastructure and protocols in place — made the decision on where to relocate a no-brainer.

“We love being in Charleston… I think it reflects the strength of the partnership we have with everyone in Charleston that we all sat down and talked and agreed it would be best to run two events there back-to-back,” Simon said.

Charleston’s partnership with WTA dates back nearly 50 years to when South Carolina first hosted the formerly named Family Circle Cup on Hilton Head Island in 1973. The tournament has been held on Daniel Island since 2001, and Simon said the event is here for the long-haul.

“This is an investment, a long-term venture,” he said. “There are no plans to move it, and you don’t want to. If you want people to invest into an asset, and you want them to build the infrastructure to make this special, then you have to make a long-term commitment.”

Since both WTA tournaments took place without fans, the WTA pivoted this year by creating a global made-for-TV event. Full coverage from South Carolina was served over a two-week span.

And those impacts go beyond the weeklong hotel stays and live action. Warren said that in 2012, after the PGA Championship wrapped up, the Lowcountry experienced a trickle-down effect for months.

“Our businesses jumped from August 2012 to 2013, and we had a very significant exposure in our business,” he said. “Everyone felt it. So I feel there is some anticipation. That’s what I’m excited about.”

Defending PGA Champion Collin Morikawa was equally excited talking about the tournament during an April visit to The Ocean Course at Kiawah Island. He said the May event was a “big star” on his calendar.

“We’re peaking at a good time, and we’re really looking forward to this kind of next few months of golf because there’s a lot of good golf to be played,” he said.