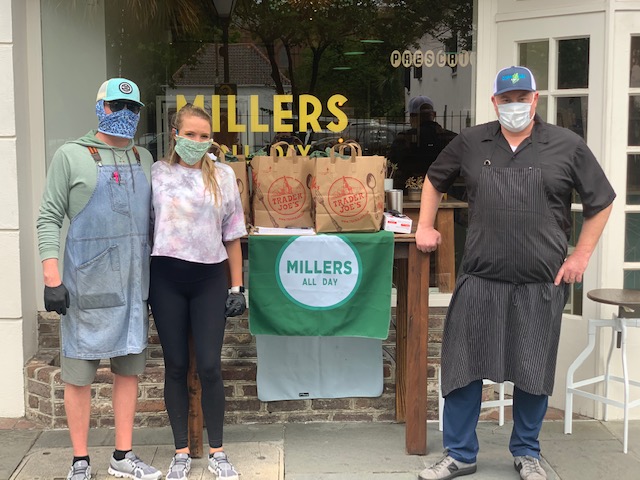 Pay It Forward Charleston started as an idea between six industry workers at the eatery Butcher & Bee — in particular owner Michael Shemtov and Tara Pate, director of marketing and chief of staff. Shemtov also owns The Daily and is the manager of the Charleston food court, Workshop.

The volunteers collaborated with area restaurants over the last year to provide more than 11,250 grocery bags for food and beverage workers struggling during the pandemic.

“It was true Michael fashion that COVID is happening and the industry is crumbling, and instead of saying, ‘How can I save my business?’ he thought, ‘If this is happening to me, it’s happening to all of us,” Pate said of Shemtov.

Thinking quickly, the group took restaurant provisions that would have spoiled during the shutdown and packed them up for furloughed team members. They scaled it so that nothing went to waste and, just as importantly, so that supplies could last more than a week.

In time, the group dubbed Pay It Forward Charleston collaborated with local restaurants that donated food and resources. Volunteers have included Fig, Mercantile & Mash, Millers All Day, Taco Boy and Butcher & Bee. Some restaurants bagged while others became pick-up locations, meticulously following protocol of how many people can be indoors together, how to touch food and more.

Local farmers also came on board in what Pate called a win-win for everyone.

“Chickens weren’t going to stop producing eggs simply because there were less people to buy them,” Pate said. “So we bought produce at cost or slightly above from all these purveyors.”

Every bag cost $10 to put together, and Pay It Forward Charleston was packing 1,000 a week. Thanks to community fundraising, $100,000 in donations helped the group sustained its first year in action.

It shows just how many people have been impacted.

Countrywide, the National Restaurant Association’s State of the Restaurant Industry Report said that throughout 2020, nearly 2.5 million jobs were lost. In total, restaurant and food service industry sales fell $240 billion from an expected $899 billion and as of Dec. 1, more than 110,000 dining places were closed either temporarily or for good.

While many Charleston restaurants have re-opened and brought staff back, Pate’s eyes have been opened to how important emergency help is for industry workers. She said the need extends beyond a pandemic, whether it’s a medical emergency that keeps a worker out of a job for weeks or a hurricane temporarily closes a restaurant.

“There are all these national efforts and everybody applies for those grants, but this was something we could do on a local level,” Pate said. “We have to think long term.”

Pay It Forward Charleston filed for official 501(c)(3) tax-exemption status and has since hired an executive director and filled its board. In November, Carrie Larson was named the executive director, while Shemtov has since been appointed as board Chairman.

The nonprofit is now looking to distribute its first grants, Pate said. It will get through the first quarter of 2021 with a $25,000 donation from The Indigo Road Hospitality Group, $10,000 from Home Team BBQ and $2,500 from Halls Management Group. But the nonprofit needs another $75,000 to keep it going throughout 2021.

Pate envisions fundraising events that cater more toward the food and beverage workers. Think less galas, and possibly more food-focused, low-key events. The money will be awarded as emergency relief grants for those who’ve worked in the food and beverage industry for a minimum of six months, 30 hours a week.

When efforts began, Pate had no idea how many restaurants and volunteers would step up to donate time and money, but it shows how much people believe in the integrity of Pay It Forward Charleston’s mission.

“Their willingness to offer a hand up to those in need is truly remarkable,” she said. “I am blown away by how a grieving industry has so generously looked outward and I am excited to see the impact we can make together.”

Editors note: An earlier version of this story incorrectly identified where the $100,000 donation came from. This version has been corrected above.