Harbour Club to reopen on the Ashley River with renewed purpose 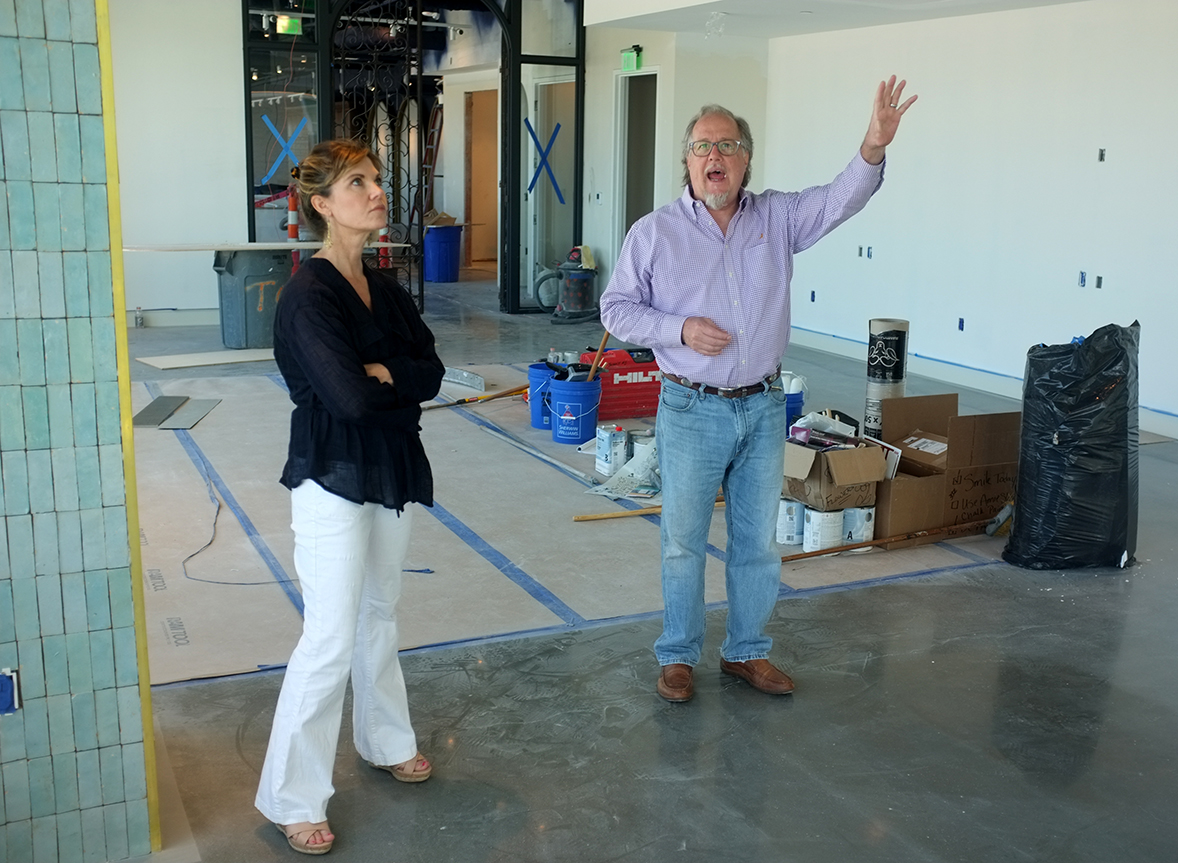 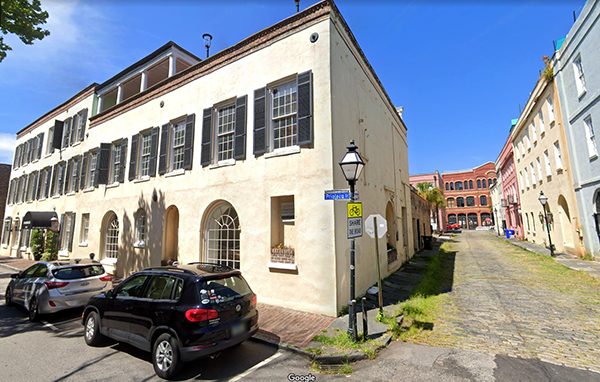 One-hundred eighty years before 35 Prioleau St. in Charleston became the Harbour Club, the building served as offices and warehouse space for the city’s working waterfront.

Charleston was a different place in 1814, when the structure was first built as a three-story building with a gabled roof, according to a hand-drawn map from 1872 at the Library of Congress. Condominiums didn’t block the view of the harbor, and cruise ships couldn’t be seen steaming toward Union Pier.

The building’s location, within walking distance of Waterfront Park today, was situated between Brown’s Wharf and Kerr’s Wharf, where the swings on the pier and the Pineapple fountain are now located.

The building was surrounded by similar structures on the Cooper River near Vendue Range in the French Quarter. The waterfront consisted mostly of open sheds of cotton, guano and storage for other goods being loaded and unloaded onto the ships that frequently docked.

Today, the building is for sale for $8.85 million, but owner Henry S. Fiedler isn’t waiting on a sale to change how the building might be used, according to Scott Benedict, president and broker in charge at Charleston Commercial Specialty Group. Benedict worked as a contractor on the restoration project when the Harbour Club opened at 35 Prioleau St. in 1994.

Benedict said the building, for the most part, was gutted before the Harbour Club moved in, though original brick can still be seen on the Cordes Street side of the building. 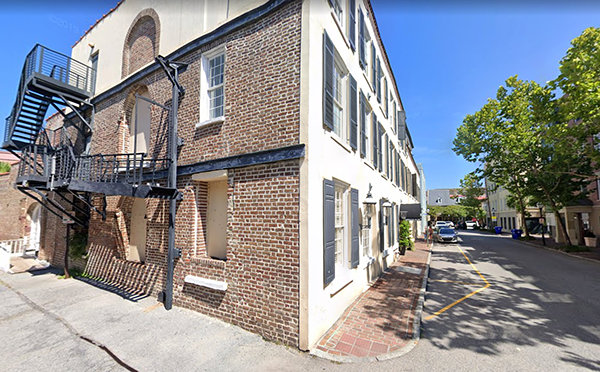 “The building there has such history. It was basically on the wharf when that thing was built,” Benedict said. “It was built in 1814 and used as a cotton and tobacco warehouse.”

With the Harbour Club set to open in WestEdge this month, Benedict said 35 Prioleau St. will undergo improvements to reopen as an event venue called The Prioleau, but he said the owner would still like to sell or lease the property.

“It’s going to be spruced up and offered for weddings and corporate events,” Benedict said, noting that with about 20,000 square feet, “it would be one of the larger facilities in downtown Charleston for special events.” 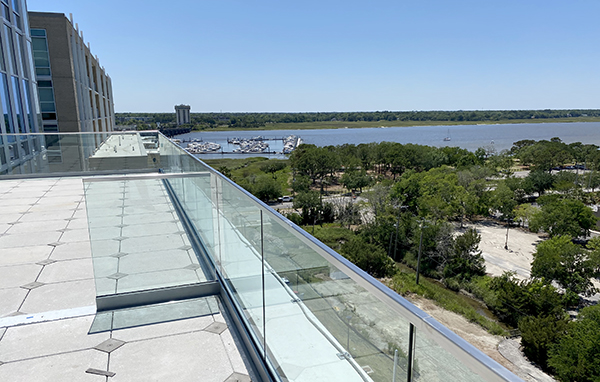 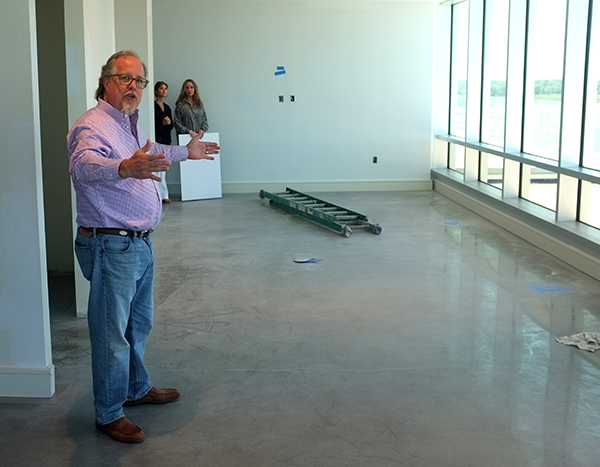 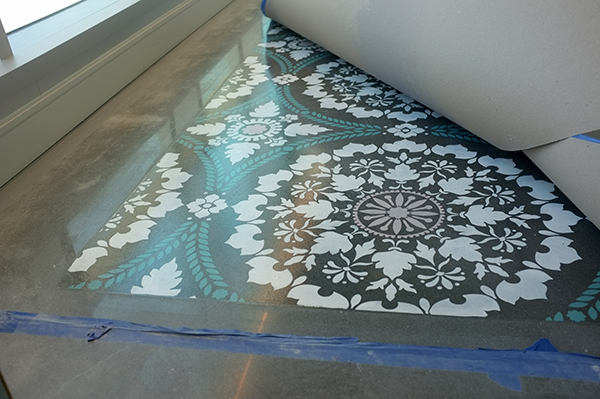 After a quarter of a century of being within walking distance of the Cooper River, The Harbour Club has crossed the peninsula to the entire seventh floor of WestEdge, overlooking the Ashley River and much of Charleston.

The $5 million project represents more than a relocation of an existing asset into new construction, however. The owners, partners, board of governors and chef took the opportunity to reimagine the mission of The Harbour Club, providing the same philosophical framework that gives multiple generations of professionals a reason to be there.

The reopening was slightly delayed because of the coronavirus outbreak, but the owners said the pause gave them a moment to catch their breath before moving toward an opening on June 15 as The Harbour Club at WestEdge.

Sean Laney, founder and president of BNG Hospitality, said The Harbour Club lost its view of the water and lost parking nearly overnight when a developer built condos across Prioleau Street. BNG is a Dallas-based company that purchased The Harbour Club last year from ClubCorp, and Laney and his partners knew a new location was needed.

BNG also owns clubs in Memphis and Knoxville, Tenn., San Antonio, and Tampa, Fla. Laney said he knew that mixed-use developments worked well for similar growing areas. After meeting with the WestEdge developers about the location at 22 WestEdge and with their current lease expiring, the move seemed to make sense.

“We were somewhat limited in our previous location in terms of what we can do. What we ended up there was dining room, a bar and some meeting rooms,” Laney said. “When you walk into this space, just even in The Harbour Bar, you’ve got all these different ways that you can utilize the club that’s more relevant for the way that people do business today.”

The re-imagined Harbour Club takes into account how people today want to work, said Jim Coyne, general manager and partner at BNG Hospitality. This includes larger conference rooms, smaller, private workspaces and coworking space with food and beverage service, each with expansive views of Charleston’s peninsula and the Ashley River.

“The other thing that we really spent a lot of time on, because there’s so many people in Charleston that really don’t work from a traditional office anymore, we want to be their office away from the office,” Coyne said. “We have what we call touchdown rooms.”

The four rooms of different sizes are on one wall of The Harbour Club. The largest offers a table, four chairs and a monitor. The smallest is like a private study with a window looking out across the Lowcountry landscape.

Each room has its own theme and name: Atlantic, Hospitality, Man’s Best Friend and Lowcountry. Coyne said an “Ideation Room” across from the touchdown rooms provides a larger space for businesses looking for an out-of-office location to generate ideas.

“We wanted sort of a Google-esque type of space with soft seating. There will be an online projector with printer, big TV,” Coyne said, “It’s a place where you can do some business strategy, or if somebody wants to come in at night, use it to watch the big game, they can do that too.”

Laney said he and Coyne see the club as a platform for serving multiple business and social purposes, including entrepreneurs who want a place to splash down for a moment or for an entire day with everything they need to do personal or professional business.

“With all of the new growth and so many new people moving to Charleston, the profile and the personality of the community changing, we thought that the timing for this kind of club was ideal and that, obviously, informed a lot of our design and programming decisions,” Laney said.

The new Harbour Club at WestEdge offers versatile banquet rooms that include options for different configurations. Coyne said 260 people can be seated in the banquet facilities, which include hand-created stenciling on the floor, a design element mirrored in the restaurant area near the club’s terrace.

Coyne said one of the difficult things to determine was how to orient the kitchen for maximum efficiency without obstructing the views.

“We had a clean slate, and there’s floor-to-ceiling glass walls all the way around the perimeter, so trying to figure out where you put the kitchen can be a challenge,” he said. “We took what we thought would be the least-attractive view and put it in this corner.”

Chef Wes Long, who is from Hickory, N.C., attended Johnson & Wales and has worked around the world in food and beverage, including in Paris and Hong Kong. He said he was able to speak into the design of the space and the equipment in the large-scale commercial kitchen.

“For banquets, when you’re really pumping out plates, it’s a straight shot into the ballroom,” Long said. “I use every square inch of that kitchen. Every corner has a purpose. Every sink has a custom cover on it, so if you’re not using the sink, you can turn it into a table.”

Long said the food service at The Harbour Bar, Ashley’s Gate restaurant and banquet service will vary extensively but have one unifying element: Everything is made in-house.

Long said the phrase “playful, Continental cuisine” came to him as a thematic lens through which to see The Harbour Club’s food. With influences from the American South, Asia and France, Long said he incorporates all three but is quick to note that he’s not a fusion chef.

“It’s popular, and it’s good, but it’s just not my style. I’m more new American,” he said. “All of our sourcing is where you really hit it home. You can taste the difference in a tomato you bought from a hothouse versus a tomato that was farmed in July in the South.”

Built in 1814, The Harbour Club’s old location in the French Quarter personified Charleston’s history. The new location pays homage to the entire Charleston region with touches such as indigo color schemes, an iron gate from a bank in Marseilles, France, thematic names, and a boardroom that pays respect to The Citadel.

South Carolina’s military college can be seen from The Harbour Club’s terrace and from windows inside the special boardroom outfitted with Citadel colors.

That connection to the old and the new helped cement The Harbour Club at WestEdge’s membership even 26 years ago, Coyne said, when the club was opened as a place available to anyone.

“When this club opened, we were the first in this area that was a nondiscriminatory club. We represent the tapestry that’s Charleston, and we’re very proud of that,” Coyne said.

Laney said today the club is about finding a “common platform” for what the people and businesses in the region want. People who are entertaining an important client or families who have a special out-of-town guest will find The Harbour Club at WestEdge to be a place that fits, but the venue can also be a place for friends wanting a beer or glass of wine on the terrace.

Laney said before the owners and partners even considered what the new Harbour Club would entail, they engaged a research group to find out how the community had changed and what would serve that club niche now as opposed to a quarter century ago.

“We really kind of studied the area and who was going to be living in WestEdge and where was residency for Charleston going, and who did we want to be attractive to,” Laney said. “We really mapped all of that out before we began to put pen to paper on what were the programming elements that we needed.”

With that research in hand, the partners thought the move to WestEdge could give them the space to make the club relevant to individuals who might not have seen the old Harbour Club as a place for them. But they also wanted to maintain a balance so they did not alienate the current core group. Since the announcement was made that the club was moving to WestEdge, 100 former members have reinstated their membership.

“That’s what we’re trying to create,” Laney said. “This multifaceted platform so that no matter what you need to do socially or professionally, you can accomplish that in this space.”

This story originally appeared in the June 15, 2020, print edition of the Charleston Regional Business Journal.