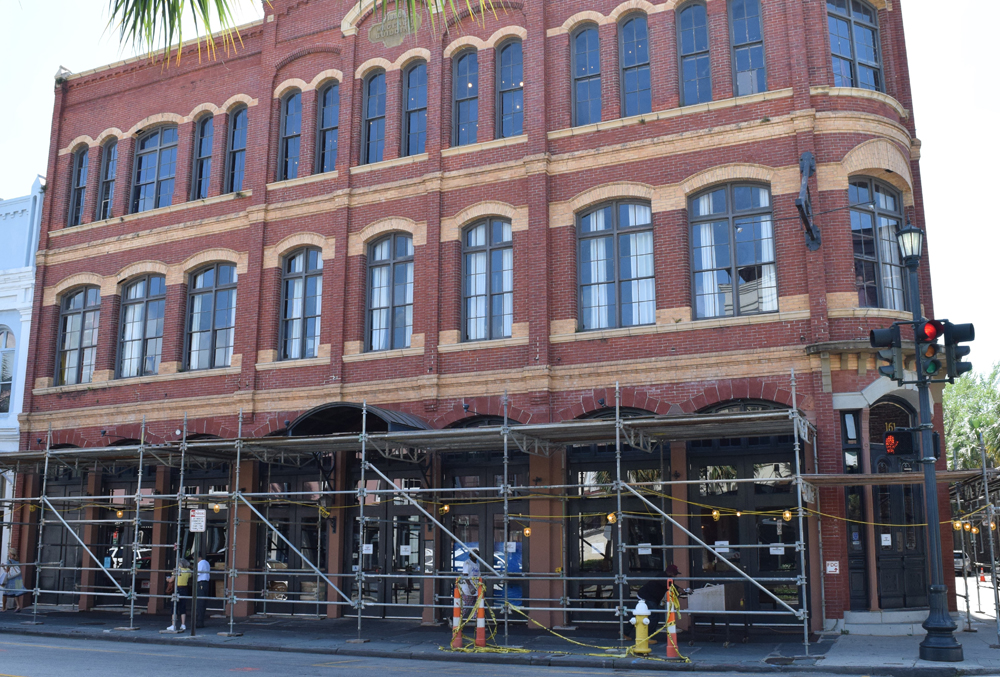 Brenden Maloof, a partner at Heights Equities Inc., said the company is finishing repairs on the 161 East Bay St. building, including replacing and repairing bricks on the exterior, reinforcing the structure with steel, and removing all of the old brewery equipment. Maloof said the repairs should be finished in a few weeks, after the last of the materials arrive.

Maloof said that when the company bought the building in 2013, Heights Equities knew some repairs would need to be done but that he didn’t expect the building to need so much.

“I don’t think there’s a buyer in Charleston who buys any building and knows what’s going to happen with the building,” he said.

When the repairs are done, Maloof said the company plans to either sell the building or find another tenant, whichever pans out first.

“Personally, would love to keep that building. I love that building,” he said. “It’s just a one-of-a-kind building in Charleston, there’s nothing else like it. ... If I could find the right mix, I would put a tenant back in there and keep ownership.”

The problem, Maloof said, is that the size of the building would require a tenant or buyer with an idea for the space.

“The building itself, the bones are wonderful,” he said. “Whatever you want to do on the inside, it can be made into a fantastic space, there’s no doubt. But it’s going to need somebody with some vision and some funds.”

Maloof said Heights Equities thought about renting out the ground floor for retail and renovating the second and thirds floors for condominiums, but “it’s a bigger project than we’d want to chew right now.”

Lagunitas Brewing Co. will not complete repairs and return to its taproom and brewery at 161 East Bay St., according to a company spokeswoman.

“After thorough evaluation of the work that needed to be done, much of it structural, we have decided that it just doesn’t make sense to do all the necessary repairs,” said Karen Hamilton, director of communications for Lagunitas. “The cost and time to complete was just too great.”

The Petaluma, Calif.-based company had closed the Charleston facility indefinitely in July to make repairs to the building. At the time, Hamilton said, the company didn’t know how much work needed to be done.

Lagunitas took over the East Bay Street building from Southend Brewery in September 2016. The building was constructed in 1880 as a store and warehouse for F.W. Wagener & Co., which sold cotton, rice, groceries, fertilizers, liquor and tobacco.

The building is currently owned by Heights Equities Inc., based in Red Bank, N.J., and known on county property records as Maloof Equities S.C. LLC. Lagunitas was paying for the building repairs because of the way its lease was structured.

Hamilton said that Lagunitas still intends to be part of the Charleston community and that the company’s beer will still be available in the Lowcountry.