Just before 3 p.m. on Aug. 21, the skies above Charleston will go dark. For about 1 minute, 40 seconds, the moon will block the sun from view.

About 200 days out from this total solar eclipse, businesses in the Charleston area are already preparing for an influx of astronomy buffs and tourists.

The solar eclipse will travel from coast to coast, starting at about 10:15 a.m. near Newport, Ore., and ending about 2:36 p.m. in Charleston.

“They are very rare in the sense of you living and seeing one without trying to go see one,” said Chris Fragile, a professor in the physics and astronomy department at the College of Charleston. “It’s probably been hundreds of years since one was visible — a total eclipse was visible — from Charleston, S.C. So to have one passing over your head is a rare treat.” 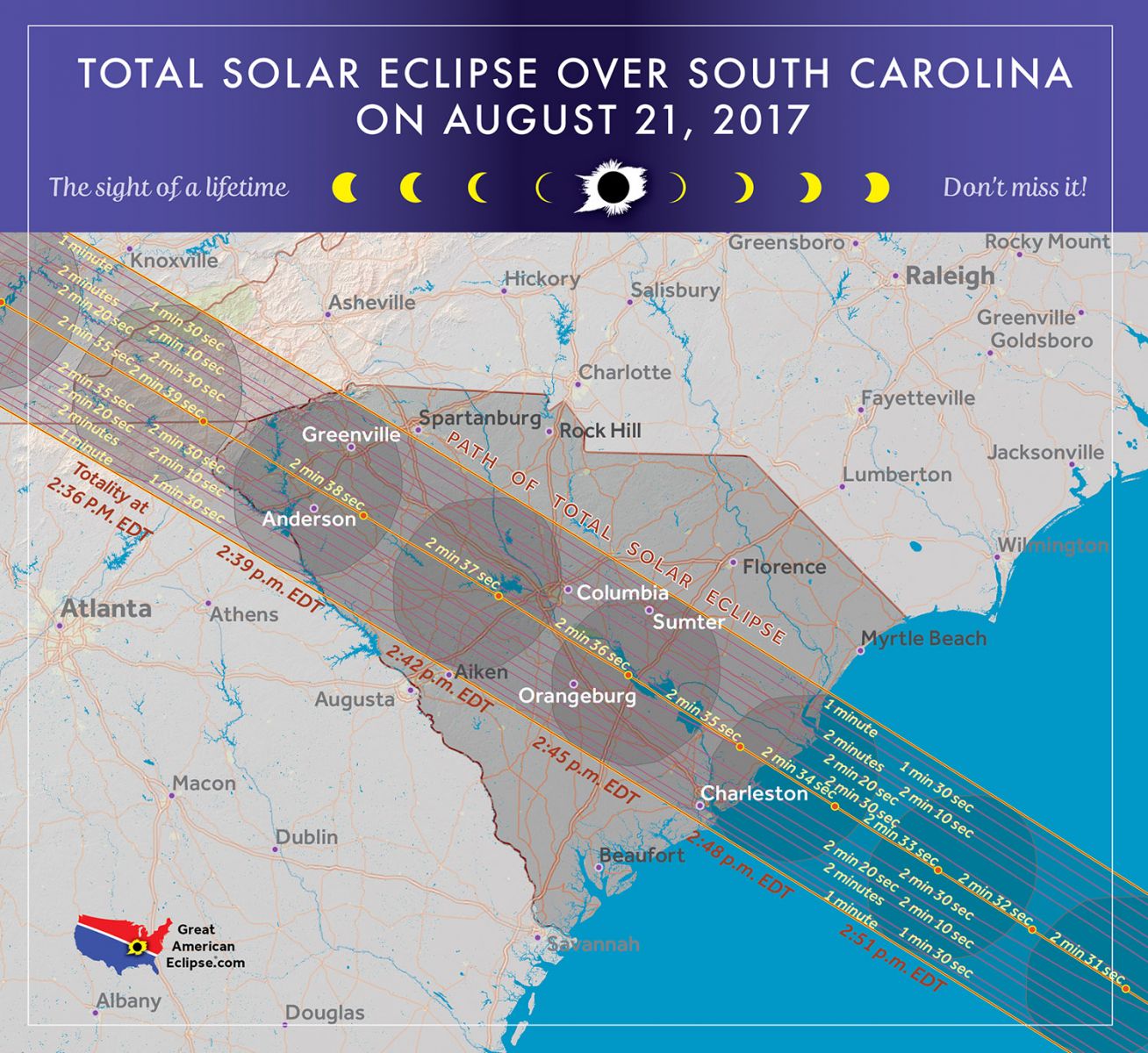 The eclipse is expected to be a shot in the arm for the region’s tourism industry, which would normally be slowing down in late August, said Perrin Lawson, deputy director and vice president of business development at the Charleston Area Convention & Visitors Bureau.

The final full week of August is not typically a time families go on vacation, as most students are returning to school then. So the tourism industry starts to lag.

“If the number of people that we anticipate coming for the eclipse actually materializes, we should see hotel occupancy in excess of 90%,” Lawson said. “Normally we’d expect countywide occupancy to be around 70-72% for that weekend.”

Generally, Sunday and Monday nights are the least-booked of the week, but hotels are anticipating higher-than-normal occupancy rates for those days surrounding the eclipse.

“Because it occurs on a Monday afternoon, the anticipation — and what we’re seeing happen to this point — is that people will come in for the weekend and make a nice long weekend out of it, which will culminate with seeing the actual eclipse on Monday afternoon,” Lawson said. “Of course, by then they’ll just go ahead and spend the night and head back to wherever on Tuesday.”

He said it is impossible to predict how many people will show up for the eclipse in Charleston, but if the amount of business that’s already on the books for then is any indication, there will be many more visitors than normal.

The booking pace — the rate at which rooms are being reserved — for the eclipse weekend was up about 200% in January compared with January 2016 at Charleston-area hotels, Lawson said.

“It’s not a huge number of rooms booked now but as a percentage increase over the same time last year, it’s tremendous, and there are a number of hotels that are sold out for that weekend,” he said.

On top of that, Lawson said the Charleston CVB has had inquiries from youth and senior citizens groups wanting to drive in for the day on buses to see the eclipse.

“One of the people I spoke with said he wouldn’t be at all surprised if within, say, a two- to three-hour radius that we didn’t have people drive in say from Myrtle Beach, Columbia, Savannah to come specifically just to see the eclipse here,” he said.

Many students in the region will likely be watching the eclipse from home; Charleston County School District has not finalized its 2017-2018 academic calendar, but the district has already decided it won’t have school on Aug. 21 because of the eclipse.

Emilie Woody, the district’s interim director of professional development, said the decision was made to address student safety and liability concerns because the eclipse will be happening around the time students would normally be dismissed from school.

Both the Charleston CVB and the Isle of Palms have created special webpages advertising the event. The CVB’s GoDarkCharleston.com page has a countdown to “one of the most awe-inspiring celestial events” and a list of hotel packages designed for the eclipse.

The King Charles Inn, at 237 Meeting St. in downtown Charleston, is offering an eclipse package and was already 30% booked eight months ahead of time, said Ray Berrouet, director of sales and marketing for the inn. The $1,191 package includes a three-night stay for two people and eclipse-related activities.

On the day of the eclipse, guests will take part in a “lunch and learn” with Fragile, the CofC astronomy professor.

“This way they’ll understand what the actual scientific process is, as well as some of the folklore that goes along with the eclipse,” Berrouet said. “Most early civilizations saw it as the moon eating or consuming the sun, so as you can imagine, especially when people didn’t understand what was going on, it was really a life changing and life altering experience, and even now it is in many ways.”

After the lunch and learn, guests will board the tall ship Schooner Pride, receive special viewing glasses to protect their eyes and watch the eclipse from the water. Once back on land, there will be a champagne reception at the inn to end the day.

Some other hotels also have created special packages for the eclipse.

The HarbourView Inn, at 2 Vendue Range, is hosting a rooftop viewing party with eclipse-themed drinks, snacks, viewing glasses and solar-filter sheets for taking photos. The Francis Marion Hotel, across from Marion Square, will offer guests water bottles and cooling towels in addition to viewing glasses as they watch the eclipse, while Belmond Charleston Place will provide its guests with a VIP viewing area, viewing glasses and a solar eclipse lecture from a CofC professor.

The Charleston CVB and CofC have ordered about 90,000 glasses that will block harmful sunlight from damaging the eyes. The glasses, which will have “Go Dark Charleston” written on the side, will be distributed to the CVB’s partner hotels and sold at the CVB’s four visitor centers, Lawson said.

The only way to safely look at the sun, except during the brief total solar eclipse, is through solar filters, such as eclipse glasses and solar viewers, according to the American Astronomical Society.

“Homemade filters or ordinary sunglasses, even dark ones, are not safe for looking at the sun,” the society’s website says.

Weather permitting, the entire country will see a partial eclipse for two to three hours that day, according to NASA, but locations within a 60- to 70-mile-wide path stretching from Oregon to South Carolina will see a total eclipse. Greenville and Columbia are also in that path.

This story originally appeared in the Feb. 6, 2017, print edition of the Charleston Regional Business Journal.

As this great event draws near, keep this important safety information in mind: You MUST use special eclipse safety glasses to view a partial eclipse and the partial phases of a total eclipse. To do otherwise is risking permanent eye damage and even blindness. The ONLY time it's safe to look at a TOTAL eclipse without proper eye protection is during the very brief period of totality when the Sun is 100 percent blocked by the Moon. If you're in a location where the eclipse won't be total, there is NEVER a time when it's safe to look with unprotected eyes.

It's a bit pretentious for Lawson to think anyone from Columbia would travel to Charleston for the eclipse. Columbia lies directly in the path and will experience a much longer eclipse, so if any astronomer-types are paying attention, that will be their destination in South Carolina.