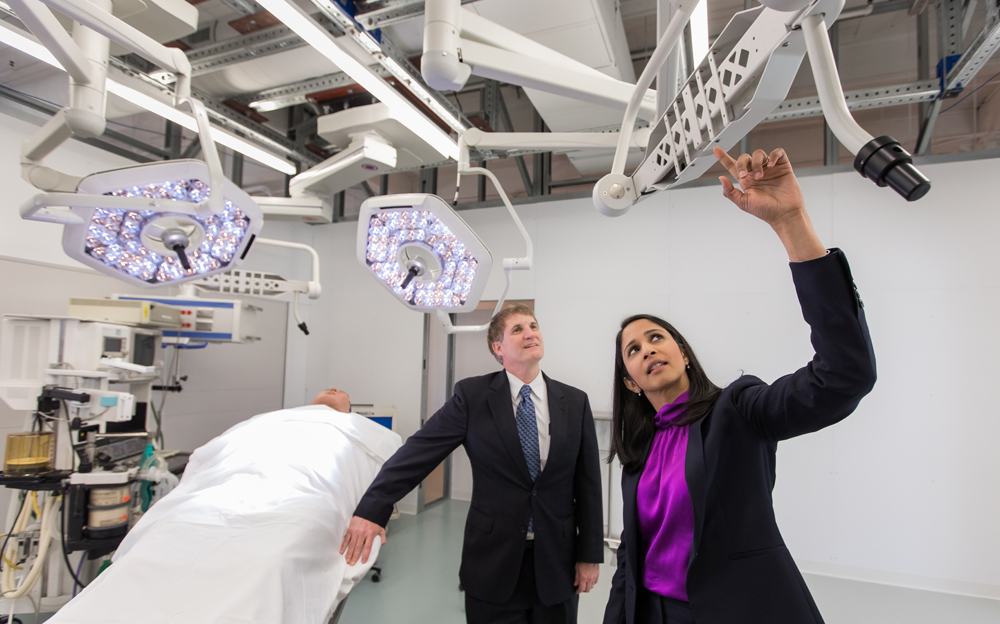 The first use of general anesthesia for surgery occurred in 1846 at Massachusetts General Hospital, and the design of operating rooms has remained relatively unchanged ever since.

“Basically, the bed looks exactly the same, except back in the 1800s, it was ... a wooden plank, and now it’s a bed with foam on it,” said Dr. Scott Reeves, chairman of the Department of Anesthesia and Perioperative Medicine at the Medical University of South Carolina. “But it looks exactly the same, and we haven’t really done much for updates or changes over that period of time.”

In an effort to design an operating room that increases patient safety and is easier for doctors to use, MUSC has been working with Clemson University on a four-year research project, which began in 2015, to study how doctors maneuver around operating rooms.

“The idea here was to not just look at the design and come up with a nicer-looking OR, but to really understand how do people work in these spaces, what are the concerns, and be sure that it’s not just related to the design,” said Anjali Joseph, a professor and endowed chair of architecture and health design and research at Clemson. “It’s related to the processes, the people — their rules (and) the tasks that they do — the technology that’s implemented, people’s interaction with the technology. We were going to look at all these pieces together.”

Joseph and Reeves are both members of the project’s 14-member core multidisciplinary team. The project also utilized the work of students from both schools.

The team spent one year analyzing and observing more than 35 surgeries and spent the second year designing an operating room that they thought would be safer and more ergonomic for doctors and patients. The project team unveiled a prototype operating room in January. The prototype, at the Clemson Design Center in Charleston, will allow researchers to perform simulations and test the design. Previously, the team had been using virtual reality and cardboard mock-ups to test their design.

Improvements include reorganizing equipment storage to bring tools closer to the operating table and keep doctors’ focus on the patients, as well as improving traffic flow and reducing the incidence of door openings in the operating room to cut down on bio-contamination.

“One of the things we learned very quickly is that the design process moves very fast, but the research process is incredibly slow because you have to be rigorous,” Joseph said.

The project is being funded by a four-year, $4 million grant from the Agency for Healthcare Research and Quality, which is under the Department of Health and Human Services. The project ends in August 2019.

Clemson and MUSC also partnered with several medical device companies — including Trumpf Medical Systems Inc., Nora Systems GmbH and HumanScale — who provided some of the equipment for the prototype.

“Our sponsors, in aggregate, they want to take things to the next level as well,” Reeves said. “Historically, an operating room’s been a square with a bed in the middle, but it’s become much more complex than that with all the equipment and interactions and technology that’s in the operating room now. So I think our sponsors have been really good at helping us understand where they’re thinking technology is going.”

Joseph said the project is based on previous work by Clemson and MUSC through which they identified some problems with the current configuration of most operating rooms. When the opportunity came up to study the issue in more depth, she said, the universities jumped at the chance.

One of the biggest challenges of the project, she said, was the size of the team working on the project: with 14 multidisciplinary faculty members and 20 students, keeping the project on track and making sure everyone was “speaking the same language” was tough.

“Architects speak a different language than engineers, and then the clinicians have no idea what the architects are talking about,” Joseph said. “But it’s been good, it’s really been good. ... We had a vision of how things needed to be, but it took a while for other people to understand.”

She said, too, that the project wasn’t able to address some bigger-picture things, such as the noise level in the rest of the hospital and ventilation configurations that couldn’t be included in the mock-up.

In the next year, Joseph said, the research team plans to evaluate the effectiveness of the prototype and begin developing a framework and tools to be implemented in operating rooms across the country.

Reeves said the goal of the project is to create a toolkit that other hospitals can use to improve their operating rooms.

He said MUSC also intends to use the findings from the project in future operating rooms that they build, such as the Shawn Jenkins Children’s Hospital and the new ambulatory centers being built in North Charleston and West Ashley.

“From my perspective, this project never really ends,” Reeves said. “We study what we’re going to do in an ambulatory surgical center in a year, and then we’re actually designing the next thing, so we have the ability to actually look at more of a community hospital and take what we’ve learned in the ambulatory area and apply it to another building. It’s exciting.”

Joseph said she’s been pleased with how well the research team has been working together.

“It’s been a great journey and a great collaboration with MUSC,” she said. “When you do this kind of research ... these types of things typically take a lot of time to get approvals and human subject approval, but it was seamless because of the leadership.”

This story originally appeared in the Feb. 19, 2018, print edition of the Charleston Regional Business Journal.