The S.C. Department of Corrections spends more than $58 million a year on health care for the roughly 20,620 inmates in state prisons. Even though the state’s per-inmate cost is one of the lowest in the nation, taking prisoners to hospitals and medical facilities leaves the detention facilities at risk.

Each time an inmate is taken outside a prison to receive medical care, at least two corrections officers and a driver are required to escort. With too few staff available — as is often the case in S.C. prisons — the facility is typically put on lockdown. 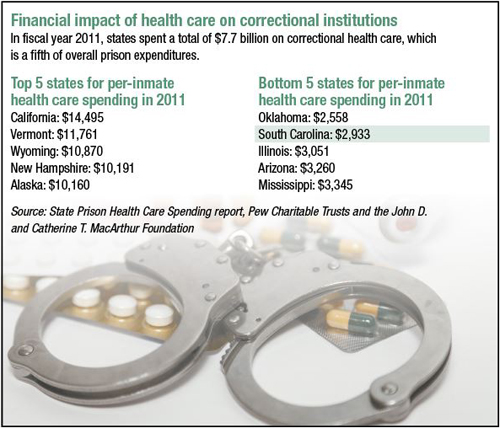 “When you take two officers out of the institution, there are not enough officers to run that either area or facility safely to have the inmates going to let’s say the cafeteria or to canteen or to their programs and services that they have scheduled,” said Stephanie Givens, deputy director for communications at the Department of Corrections. “They lock that institution down to make that medical run as safely as possible.”

The outings also could put the public at risk, if an inmate escapes while traveling to and from the medical facility — though Givens said she couldn’t remember an incident like that occurring recently in the state.

To cut back on the number of hospital trips, the Medical University of South Carolina signed a contract in April with the Department of Corrections to provide care for patients behind bars through audio and visual communication technology. This telehealth services agreement is expected to help ensure safety, by keeping more inmates inside the prison, and to save the state money, by decreasing costly trips to the hospital.

Typically, a nursing staff works around the clock at the facilities, but physicians and nurse practitioners may be physically available in the jail only during weekday working hours, according to Dr. Ed O’Bryan, program director of correctional telemedicine at MUSC. 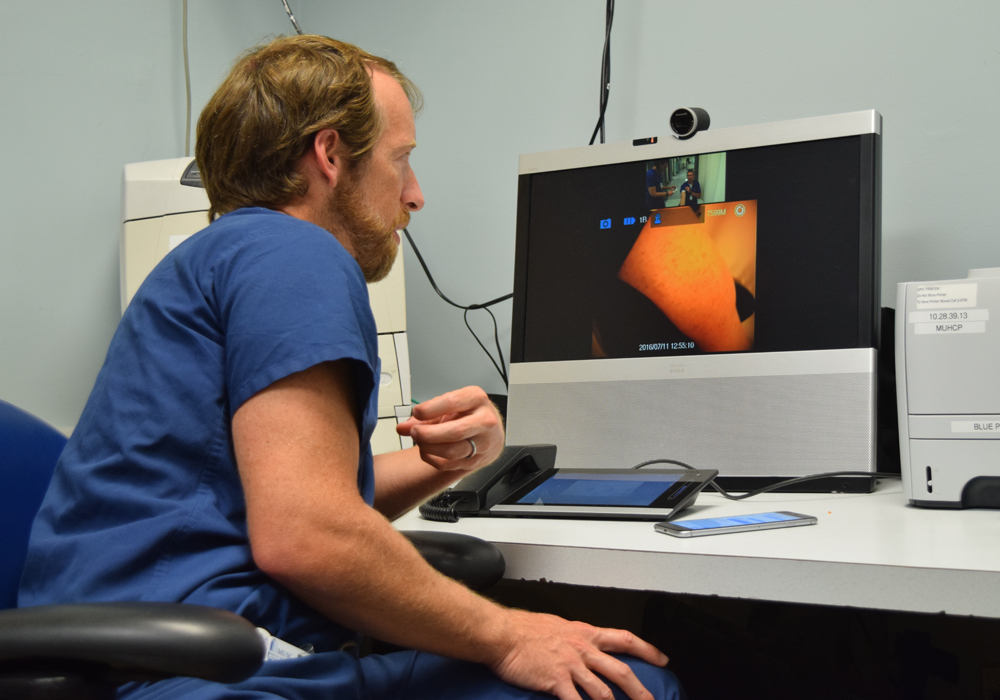 “There’s not a doctor there at most times, at most jails,” he said. “Most times it’s normal business hours, like 8 to 5. So any time after that — all nights, all weekends, holidays, all that kind of stuff — there’s no doctor there.”

The perceived stigma of treating a prison population is at least partially to blame for the lack of medical professionals working inside jails, O’Bryan said.

“The Department of Corrections, they have a lot of job openings in health care because a lot of people don’t want to work in the jail environment,” he said.

If a medical emergency occurs when a doctor is not at the facility, the prisoner is typically transported to the closest hospital. That can be a long trip because most prisons are located in rural areas.

When a prisoner needs a physical, is injured or sick, or needs a doctor’s consultation, a nurse at the detention facility can now request an on-call doctor at MUSC to respond. The physician sits at an MUSC computer and connects to a portal on a mobile cart at the prison. Both sides are equipped with cameras, microphones, speakers and the patient’s electronic medical records.

The doctor can, for example, examine the prisoner’s skin for lesions or rashes, look into the ears, nose or throat, listen for any irregularities in the heart rate or breathing and talk about symptoms — all without the patient leaving the infirmary or cell.

X-rays, blood tests and blood pressure checks can be requested by the doctor and are typically completed within the facility, allowing for many common conditions to be diagnosed and treated remotely at night or on weekends.

“We’re not trying to replace anything that the state prisons are doing,” O’Bryan said. “We’re trying to augment the care and provide a faster level of emergency care, especially for patients who may be transferred out to the emergency department.”

Inmates with more serious conditions, such as those in need of a surgery or with extremely abnormal vital signs, can still be brought to MUSC for care.

Prior to the agreement with the Charleston County jail, corrections officers were bringing an average of one inmate a day to MUSC. Now, many of those patients receive diagnoses and treatments within the jail.

“The people who are here in the jail, they receive the least amount of medical care consistently. So we see lots of unmanaged conditions,” said Lynette Morris, assistant director of nursing at the Cannon Detention Center. The center averages 1,100 inmates and employs one in-house physician, she said.

Many inmates have diabetes or high blood pressure diagnosed for the first time while they are behind bars because they so rarely visited doctors before being incarcerated.

“Usually when they get to us, the stress of being here exacerbates their condition,” Morris said.

O’Bryan said his goal is to expand the program into every state prison, as long as funding from the S.C. General Assembly continues. The detention facility’s mobile carts — costing $22,000 each — were paid for by MUSC through state appropriations, MUSC spokeswoman Heather Woolwine said.

She said the detention facilities pay the hospital $70 for each hour that a doctor completes patient evaluations and $300 per day that a doctor is on call for emergency services.

This story originally appeared in the July 25, 2016, print edition of the Charleston Regional Business Journal.