Charleston deploys a Glutton to eat up street waste 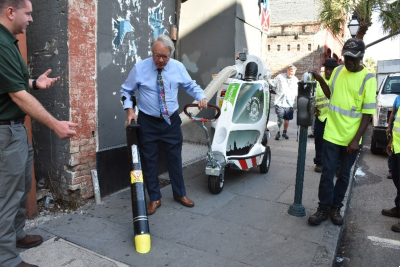 The city of Charleston has upped its game in the street-sweeping department, replacing the broom and dustpan with a high-tech tool in the central business district.

According to a news release, Charleston is the first major city in the United States to use an electric street vacuum called the Glutton, also the name of the manufacturer.

It will be used along highly trafficked areas of King Street.

“The Glutton can do a more thorough cleaning than a broom and dustpan, enhancing and speeding up our cleanup efforts where people tend to travel more,” Matt Alltop, superintendent of environmental services for the city, said in the news release. “It can get inside tree wells, into grates and along sidewalk curbs.”

The Glutton was purchased from Joe Johnson Equipment for $27,000. The city plans to purchase a second Glutton by the end of the year, the release said.

The Glutton was designed in 1996 in Belgium by company founder Christian Lange. It can be used outdoors and indoors, and fits through doorways, the release said. The Glutton is currently being used in airports throughout Europe and in more than 70 countries.

Battery-powered and quieter than some home vacuums, the Glutton runs up to 10 hours on a charge and does not emit exhaust fumes, the release said. It periodically emits a deodorizer scent to neutralize trash pickup smells. Trash is collected in a 240-liter, wheeled trashcan, with liner bags the same size as those used in the city’s Bigbelly trashcans.