Gov. Henry McMaster plans to include in his budget proposal next year $10 million for flood mitigation in Charleston’s medical district, which officials say is a major step toward alleviating problems near the peninsula’s hospitals.

The funding, which would appropriated through the Medical University of South Carolina, would allow the city of Charleston to build a tunnel and drop shaft in the medical district that would connect to the Spring-Fishburne drainage project, a deep-tunnel drainage system that is currently under construction. 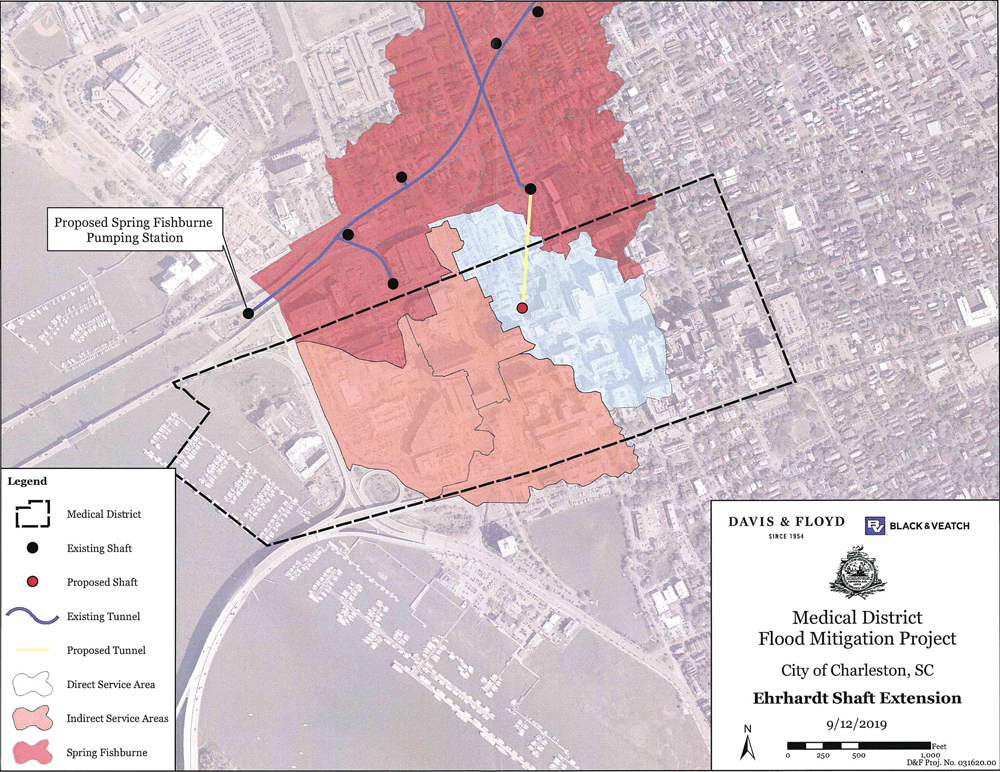 Mayor John Tecklenburg said this extension of the tunnel system, called the Ehrhardt Shaft Extension, was left off of construction plans a decade ago because it wasn’t seen as a priority.

“It’s really a sign of how things have changed and how remarkably our awareness of this issue of flooding and sea level rise has happened over the last five years,” Tecklenburg said.

Accelerating construction of the Ehrhardt Shaft Extension was a priority identified in the Dutch Dialogues report released in September. The project team said postponing construction would “cost several millions of dollars more and prolong exposure to flood risks.”

“There are substantial opportunity costs of delaying drop shaft construction,” the report said. “Beyond these lie flood impact costs to the city and CMD (Charleston medical district) financial losses due to service interruption.”

The funding must be approved by the General Assembly before construction can begin.

The $10 million from the state is expected to completely cover the cost of connecting the medical district to the rest of the tunnel system, though Tecklenburg said Charleston is covering the design and engineering costs to make sure the project can begin as soon as the money is approved by the Legislature.

Matt Fountain, stormwater director for the city of Charleston, said the city has initially allocated about $300,000 to pay for preliminary design work, with an additional $500,000 for the complete design and engineering work still needing approval from City Council.

Dr. Patrick Cawley, CEO of MUSC Health and vice president for health affairs at MUSC, emphasized the importance of the dialogue around flooding.

“Our governor and our mayor recognize as we do that it’s time to act, and this investment will allow MUSC to connect to the city’s ... drainage project,” Cawley said. “That connectivity is critical to our mission and will help us continue to ensure the safety of our patients, our families, our students and our entire care team.”

“Together, we are making it clear that what affects one organization affects all of us,” Cawley said.

Fountain said the $200 million Spring-Fishburne drainage project is expected to be mostly complete by 2022, with the system functioning by gravity flow. Another year of construction will be required to finish the pump station, which would force water out of the system.

Even without the pump station, though, Tecklenburg said the drainage capacity will be five to six times greater than it is now.

“The inconvenience, the inability of access that we’ve seen on the major roadways of our city due to flooding will be a thing of the past,” Tecklenburg said.

wait until he finds out he can't budget money -- per the constitution -- because he's not in the legislative branch. *sighs* did this article really say the governor was going to include money in the budget?