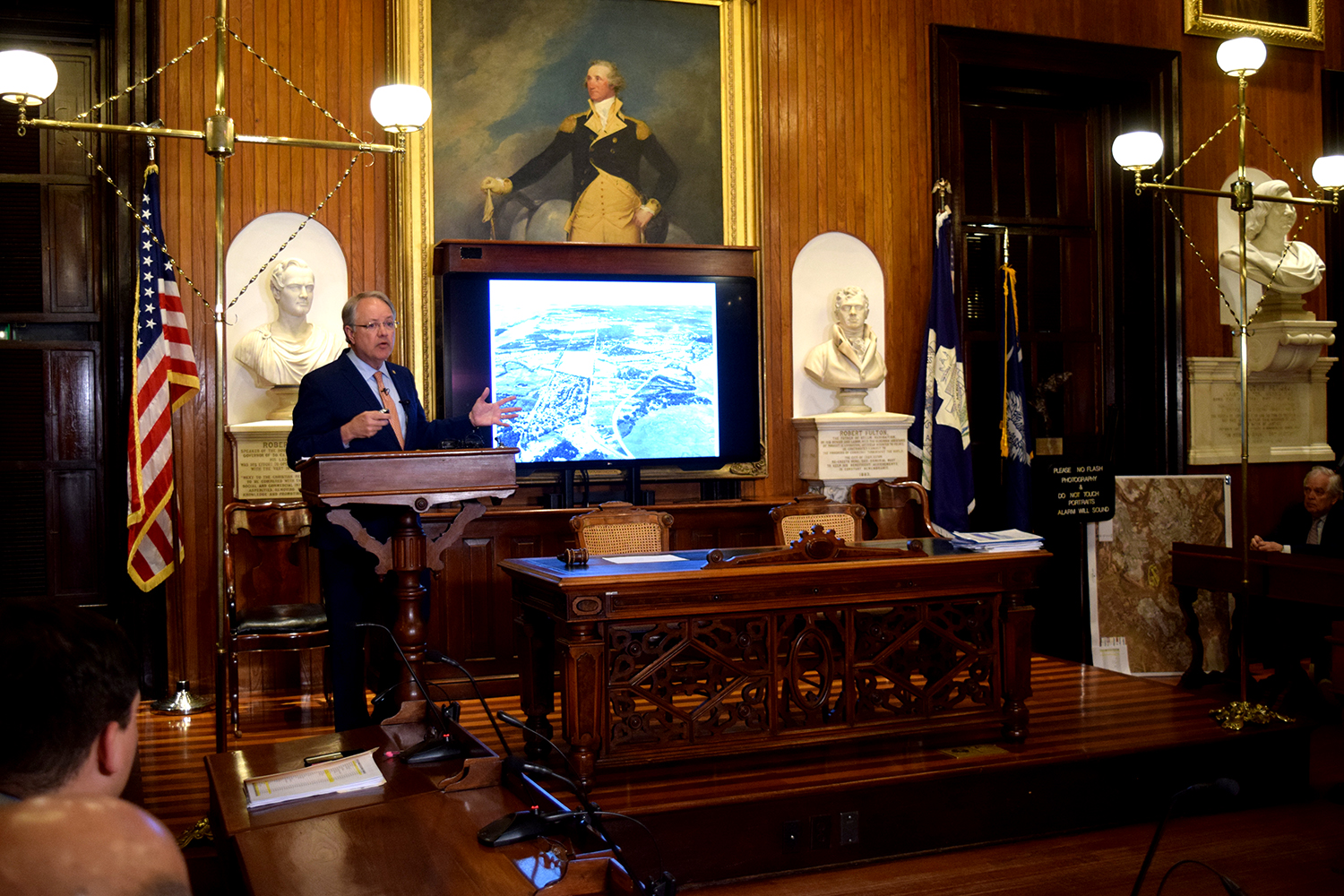 Charleston Mayor John Tecklenburg pointed to flooding as the city’s main concern for the second year in a row, imploring residents and councilmembers to recognize the importance of the issue.

The mayor said in Tuesday’s State of the City address that a lot of progress has been made in other areas that he prioritized in last year’s address, including affordable housing, transportation and public safety.

“I’m pleased to be able to report to you tonight that the state of our city of Charleston is hopeful and strong, but there’s much work to be done,” Tecklenburg said, adding, “As great as our progress has been on these and other issues such as short-term rentals, social justice issues, West Ashley revitalization, I want to focus tonight on our city’s top priority: flooding and drainage.”

Tecklenburg pointed to the fact that eight- and nine-foot tides have become a regularity in recent years, as well as the fact that the sea level is rising; the mayor said the city believes the 50-year sea level rise will be between two and three feet.

“If you combine the extreme weather that we’re seeing, the sea level rise that we know is coming, we have a situation that presents the existential threat to our city,” he said. “If you look out generations to come, we must deal with our drainage and flooding issues and sea level rise for our city to survive, for our children and our grandchildren to be able to enjoy this city as we do today.”

The majority of Tecklenburg’s address was spent presenting a strategic plan to address flooding, which the mayor said he will formally present to the City Council for consideration next month.

The plan includes five components — resources, governance, infrastructure, land use and outreach — that the mayor said are critical to success.

Tecklenburg said the City Council usually focuses on infrastructure and the resources of how to pay for projects.

“And those two components are critical, but we’re adding the consideration of the governance — what kind requirements are we putting in place to protect ourselves from flooding and to control future development?” he said. “The land use, thinking about smartly where we should be building in the future. … And lastly, the outreach, to involve our citizens to advocate for these changes that need to occur.”

The city has already embarked on several initiatives to either create or identify necessary resources, Tecklenburg said, including creating the new stormwater management department, studying how the Dutch deal with flooding during an overseas trip in the fall, and a partnership with the Army Corps of Engineers for a flood study.

Tecklenburg said partnering with the Army Corps of Engineers means that any projects identified and vetted by the corps will be eligible for federal funding that may be necessary to getting the projects off the ground.

The mayor also pointed to several infrastructure projects underway across the city, including new tunnel systems along East Bay, Calhoun and Market streets, and the Spring/Fishburne drainage project that will build a pumping station alongside Interstate 26.

“This system will end the day where the Septima Clark Parkway is a hindrance to mobility in our city whenever it rains,” Tecklenburg said. “This will make the difference, folks.”

The city also intends to start rebuilding and heightening the Low Battery sea wall later this year, a project that has been in planning for more than two years.

“This is what I envision for the peninsula of Charleston: Eventually we will have a perimeter wall protection all the way around the perimeter of Charleston,” Tecklenburg said. “But do it in a way where it’s a benefit to our citizens, with walkways and amenities. And then have the tunnel systems in place so when rainwater or other water happens to get beyond the perimeter wall, we’ll be able to pump that.”

The mayor said funding all of the initiatives and projects will mean cobbling together different sources, including the half-cent tax allocation from the county, grants, and tax increment financing districts, which reallocates taxes from increased property values to make public investments to try to stimulate private investment. The city recently created a district in Church Creek solely devoted to drainage.

Tecklenburg said he’s also pushing for the General Assembly to pass a bill that would allow cities to use accommodations taxes for drainage projects. The bill was proposed last year as well, but ultimately failed.

Dealing with flooding and drainage issues in Charleston, Tecklenburg said, is going to require all citizens to come together and advocate for change.

“All these things we’ll have to do together as a community, to create a mindset among Charlestonians not only of the importance, the existential importance of dealing with flooding and drainage, but for all of us to become a part of the solution,” he said.

City sanctioned flooding on Shoreham Road. Teck knows all about it yet is playing games.

Hah! Patrick Hoff, you should do some investigative journalism into Shoreham road in oakcrest, on James island. You'll find out just how much of a threat he already knows flooding has been.