In the 1970s, Charleston averaged about two floods annually because of high tides, commonly called King Tides, and tidal storm surges. In the 1980s, that number grew to four per year, then eight per year in the 1990s.

The city is projected to encounter about 180 tidal floods per year in the next 30 years, according to NOAA and the city’s Sea-Level Rise Strategy (.pdf). Frequently traveled roads like East Bay Street and Morrison Drive, Lockwood Boulevard and others along marshes and rivers could be impassible for about half of the year when the tide is at its highest point. 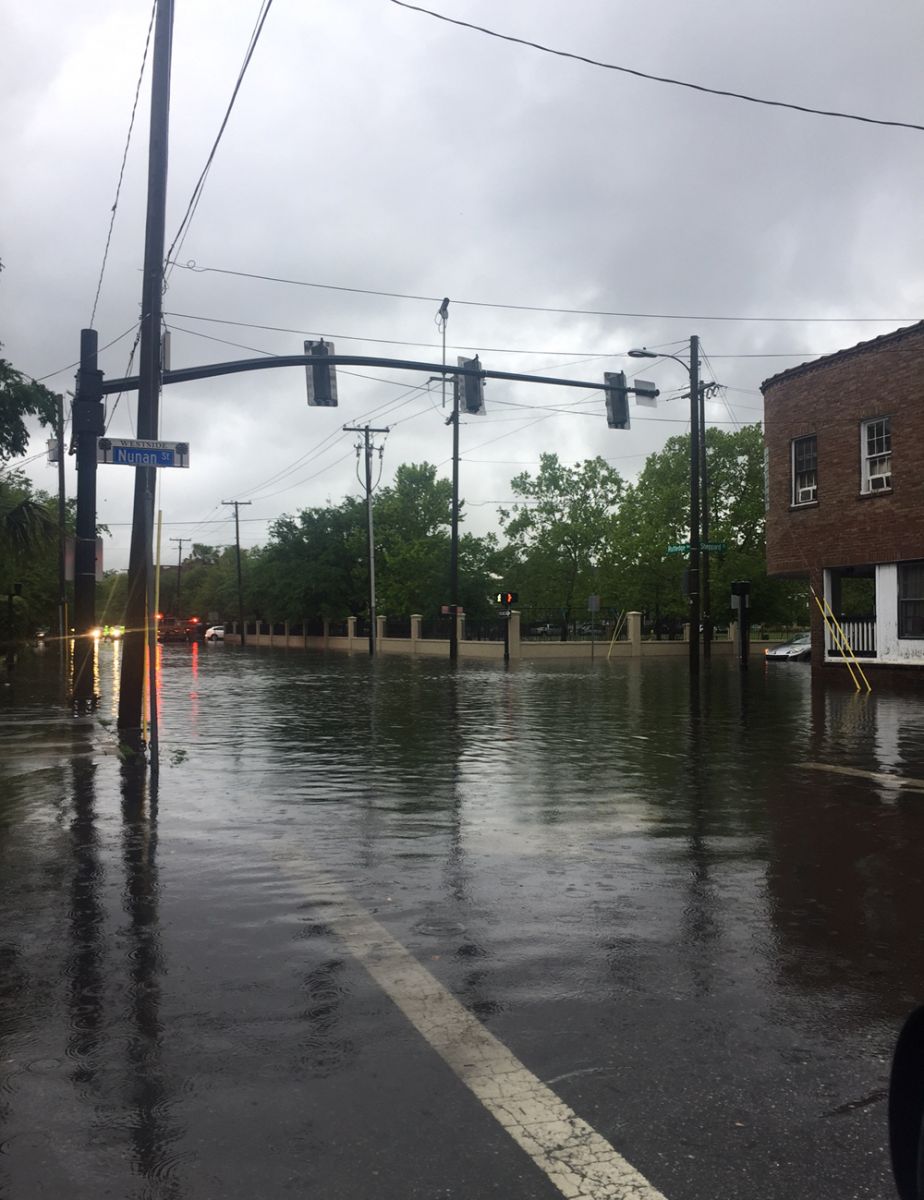 Globally, sea levels are rising because of atmospheric warming, which causes oceans to warm and glaciers to melt, adding more water to the oceans, she said.

Locally, parts of the peninsula that were built on fill, or reclaimed land, are now sinking, and some building and road developments are rerouting the natural flow of water — both of which can make flooding worse, she said.

“People are really starting to take notice, so it’s really this reality of ‘That’s going to start happening more and more frequently and become more and more than just a nuisance over time,’” Fly said.

The historic flood of October 2015, which included tidal flooding coupled with extreme rainfall, was a wake-up call for many people and organizations, she said.

The city developed its Sea-Level Rise Strategy about two months after the flood and created a new position, chief resilience officer, earlier this year. The Charleston Resilience Network, a group created in early 2015 to develop hazard strategies, ramped up its work on preventing, preparing for and responding to flooding. And Clemson University began working on a new master’s degree program, which will be taught exclusively in downtown Charleston, on resilient urban design.

Over the past few years, governments, universities and organizations around the country have started using “resilience” as a catchphrase to describe their work of helping communities to quickly recover from changing environments, whether natural disasters, population shifts, development booms, technology upgrades, economic swings or others.

Dan Burger, director of the Coastal Services Division within the S.C. Department of Health and Environmental Control's Office of Ocean and Coastal Resource Management, said “resilience” is replacing the commonly used term “sustainability” in many socioeconomic discussions.

“I think ‘resilience’ has become the new buzzword because of recent events, whether it’s because of Hurricane Matthew or the flooding events of 2015 here locally, or looking at what happened with Hurricane Sandy in the Northeast,” he said. “There were a lot of assumptions about the ability of coastal communities, in particular, to absorb impacts associated with coastal storms and climate-related changes, and I think a lot of that was put to the test.”

Clemson expects to launch its master’s degree in resilient urban design with about 16 students in the summer of 2018, according to Ray Huff, director of the Clemson Architecture Center in Charleston. Classes will be held in the Design Center at the Cigar Factory on East Bay Street.

“If you think about the conditions globally, the demographic shift from rural areas to cities is extraordinary — unprecedented — because we’re not as much an agrarian civilization anymore,” Huff said. “We make things, and we service things, and with that shift, as well as the clear impacts of global warming and climate change and how that’s affecting, particularly, coastal regions, the urban environments and settlement patterns in general are going to and already are at the forefront. We’ve got to begin to examine these issues critically.”

The yearlong degree program is geared toward professionals who have prior training in architecture or city planning. Students will study how cities are changing because of technology, population shifts, and climate and environmental issues, then come up with ways that city planners, developers and architects should respond to protect the city’s historical fabric and encourage growth based on market needs.

“We need to train people with the skills to be able to provide the kind of research and counsel and exploration and advocacy to decision-makers so that we make the right decisions as our cities move forward,” Huff said.

The Charleston Resilience Network includes officials from the cities of Charleston and North Charleston, DHEC, the College of Charleston, S.C. Sea Grant Consortium, SCANA Corp., Charleston Water System, the Charleston Metro Chamber of Commerce and others. The network hopes to link individuals in the urban design and planning sectors with those in environmental organizations to understand how construction decisions could affect coastal hazards such as flooding.

“As the region continues to grow at a rather explosive rate, we’re trying to make sure that the people who are making the decisions in terms of infrastructure and development have the best available information they can to make informed decisions,” said Burger, who is founding chairman of the network in addition to working for DHEC.

Wilbert, a retired Coast Guard captain, said he and other department heads within the city meet regularly to discuss drainage improvement projects on the Septima Clark Parkway, along Market Street and in the Forest Acres area of West Ashley, among others. When Clemson’s new resilient urban design degree program kicks off, Wilbert said he hopes the program will be an ally to the city for flooding and other issues.

“I think it’ll be a symbiotic relationship,” he said. “I think the city of Charleston will be the ideal classroom, the ideal laboratory for a program like that. If you’re looking at a design program that is focused on resilience, I could not think of a better city to be located in than a city such as Charleston that’s facing the number of challenges that we have with flooding, population growth, traffic, and then we’re at risk of an earthquake, tropical storm, tornadoes.”

This story originally appeared in the May 1, 2017, print edition of the Charleston Regional Business Journal.