Halfway through a study on how to protect the Charleston peninsula from coastal flooding, the Army Corps of Engineers is seeking public input on a potential solution: a wall around the city.

The Army Corps of Engineers, Charleston District, began its $3 million coastal flooding study of the Charleston peninsula in October 2018 with funding from the federal government. The study is being done in partnership with the city of Charleston.

“One of the primary objectives of this study is to reduce the risk ... to human health and safety,” project manager Wes Wilson said. “Also to reduce the economic damages from a lot of coastal storm events.”

The peninsula is home to 40,000 residents, 12,000 structures and $14 billion in economic value. The study is meant to find a solution to reduce coastal flooding through at least 2076. 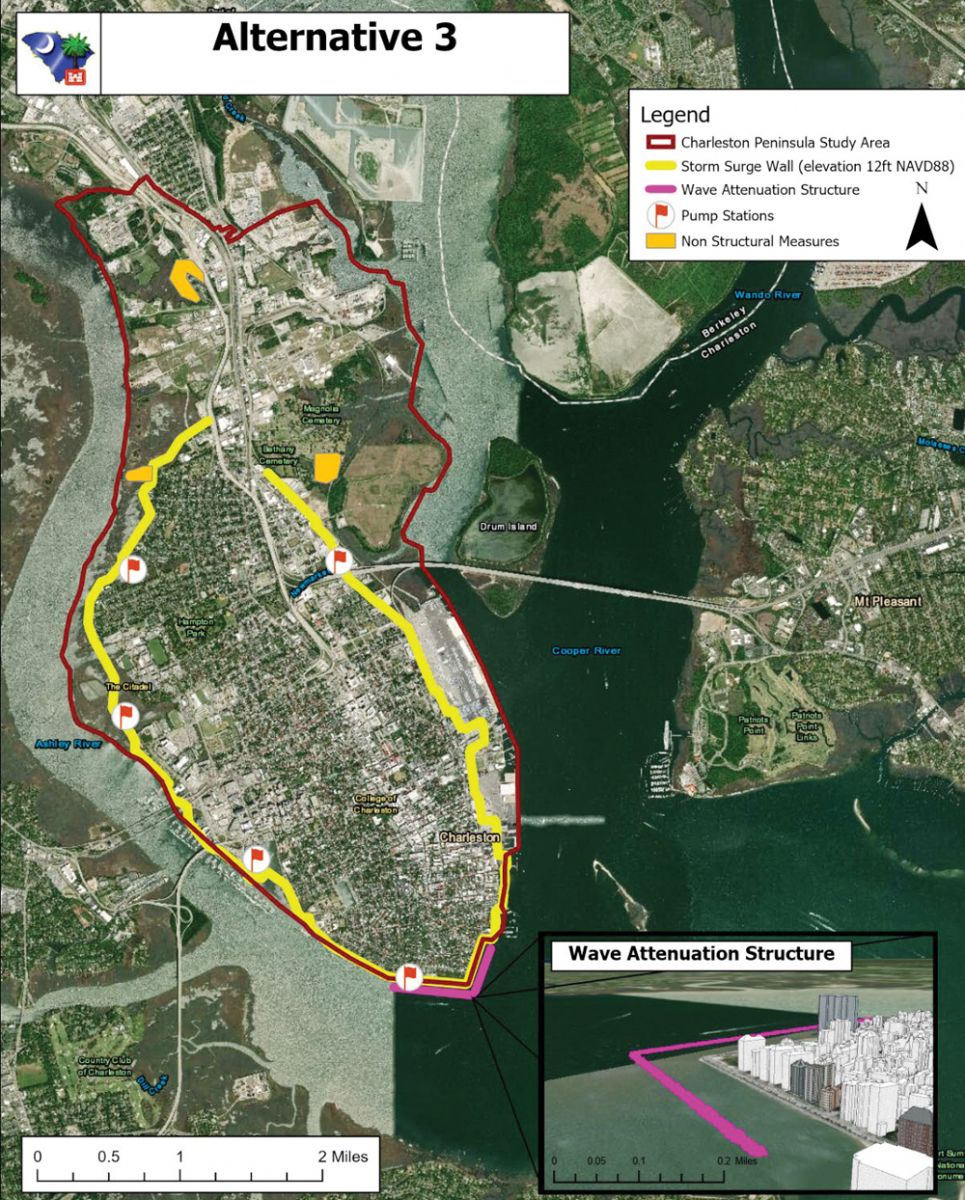 The tentative plan includes a 7.8-mile wall around the perimeter of the Charleston peninsula at an elevation of 12 feet, with five permanent pump stations and five mobile pump stations. The wall would include gates for pedestrians, vehicles and railroad.

A wave reduction structure would also be built offshore near the tip of the peninsula.

The report did not outline specifics about any of the features. The tentative plan includes options for recreational amenities along the wall, such as a walkway, and the goal is to have the wall blend in with downtown Charleston’s aesthetic.

The estimated cost of the tentatively chosen plan is $1.75 billion, with 65% paid by the federal government and 35% — approximately $613.8 million — left to local governments.

Nancy Parrish, chief of planning for the Army Corps Charleston District, said that this is “an awkward time” to be releasing a report for public review because of COVID-19 but that the corps didn’t want to delay the project.

“I think it’s going to be a long time before we have a big packed room of people,” Parrish said. “We don’t want to put it off because the storm’s coming.”

The Army Corps will conclude the study in fall 2021, at which time it will present its findings to Congress in the hopes that it will appropriate funding for the project. Parrish said design work would not begin until Congress funds the project.

The corps is studying coastal flooding, such as storm surge, tides and sea level rise, and not other sources of flooding on the peninsula, such as drainage (draft feasibility report .pdf). While coastal flooding falls under the purview of the federal government, drainage is explicitly a non-federal responsibility.

“This is just a piece of the puzzle,” Wilson said. “This is the coastal storm surge threat that the peninsula could take on.”

The draft report says, though, that mitigation for adverse impacts to stormwater runoff will be included in the final report if appropriate.

Winslow Hastie, president and CEO of Historic Charleston Foundation, said he was a little surprised by the lack of detail in the draft report — he had expected at least some rough sketches of what the structures might look like — but he understands the Army Corps’ reluctance to provide specifics that might not pan out in the final draft.

Hastie also said he expects some Charleston residents will be resistant to the city investing so much money in a project that would benefit only the peninsula.

“Now hopefully they recognize the value ... that are located here on the peninsula and in the historic district,” he said. “But, you know, it’s going to become a ‘What the hell? The city’s going to spend ... this just for the peninsula?’ That’s going to be a serious issue.”

In lieu of in-person presentations of the draft report, the Army Corps is hosting virtual office hours to allow the public to ask questions of the project team. The office hours are scheduled for 4 to 6 p.m. every Thursday in May. Citizens can call 843-329-8049 to speak with a project manager.

The corps has also extended the public comment period from the typical 30 days to 60 days, giving the public until June 19 to provide input. 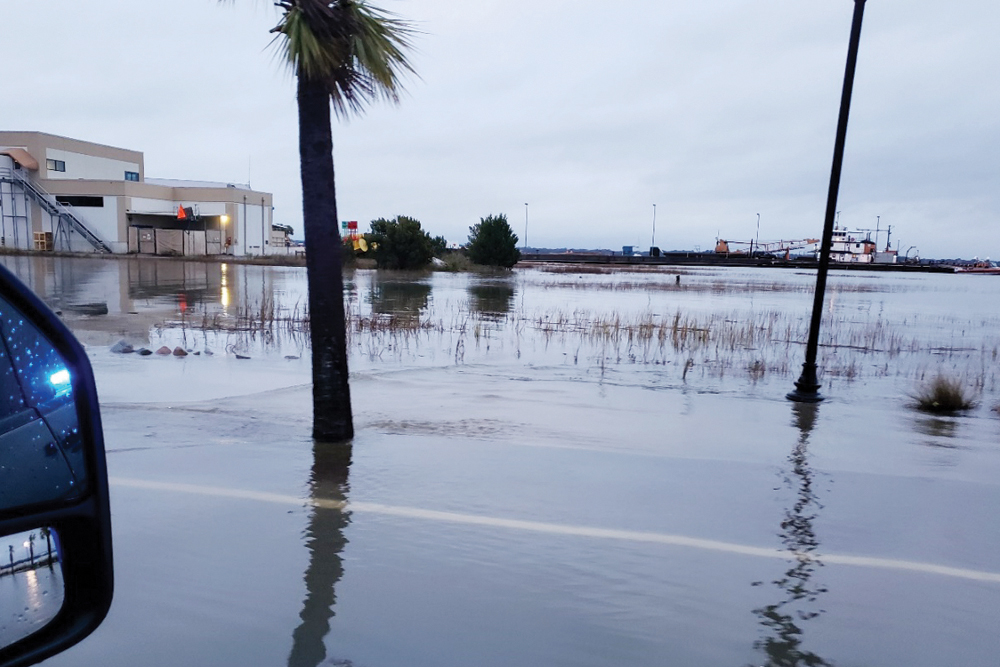 The Army Corps of Engineers said Wednesday that it also plans to hold a 30-day comment period for the peninsula study early next year to give the public the opportunity to provide input on new aspects that are not yet available, such as alignment of the wall and environmental considerations, before the plan is finalized.

“We recognize how important this study is to the peninsula and the potential far-reaching benefits it could provide to the community,” Lt. Col. Rachel Honderd, commander of the Charleston District, said in a news release. “That’s why we’re doing things a little differently and will incorporate the community’s feedback at various stages of the study. The corps is committed to developing the strongest plan.”

Hastie said Historic Charleston Foundation intends to submit comments on the project toward the end of the comment period, in order to fully digest the report and hear from the public.

Historic Charleston Foundation also plans to stage some kind of virtual meeting to help the public unpack the report.

While not endorsing the project, Hastie said he hopes that Charlestonians seriously consider what the Army Corps of Engineers is presenting in its draft report. Though the federal government likely wouldn’t appropriate money for the project until a disaster hits or a major infrastructure bill is passed, Hastie said a plan puts Charleston in a better position when the time comes.

“I think that the knee-jerk reaction on the part of the public is going to be ‘Over my dead body, we’re not going to separate ourselves from the water. We’re a water city, we’re a port town, that connection to the water is so important,’ which of course it is,” he said.

He added that to be responsible citizens, Charlestonians need to engage in the Army Corps’ project and help find a coastal flooding solution that fits the Holy City.

“This is unique opportunity that we should not squander,” Hastie said.

This story originally appeared in the May 4, 2020, print edition of the Charleston Regional Business Journal.