Solar heats up in S.C. as business installations surge 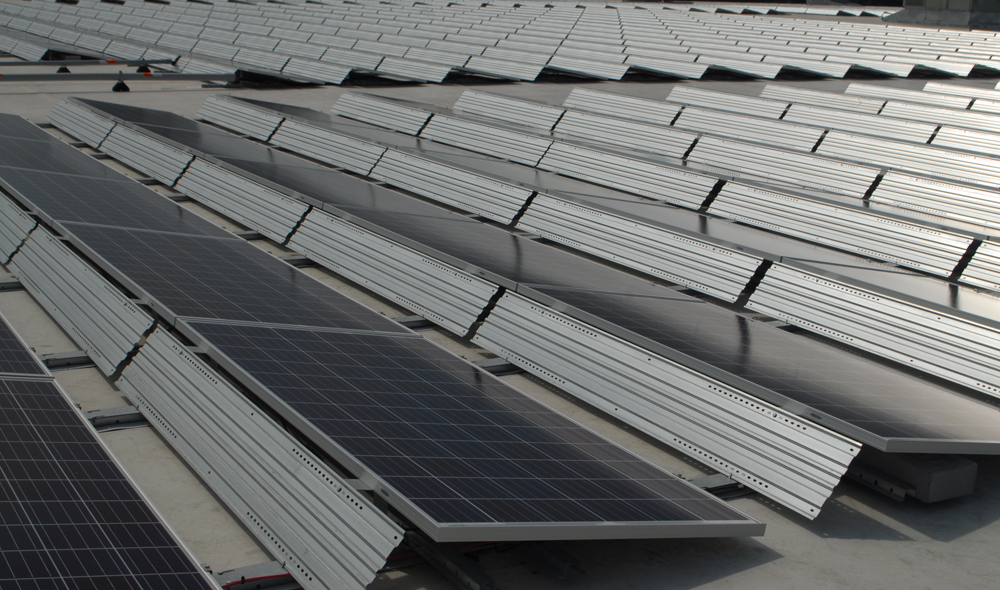 Businesses and residents have collected more than $30 million in incentives from South Carolina’s utilities for launching solar projects since 2014.

That’s when the law went into effect allowing privately owned solar operations to sell electricity back to the state’s power grid. And some industry officials, businesses and utilities think it’s time for the state to expand incentives and access to solar power generation.

Act 236 outlined parameters for net metering, a system for collecting solar energy and selling it to electric companies at a specific, agreed-upon rate that is then credited against usage.

Danny Kassis, vice president of customer relations and renewables for S.C. Electric & Gas Co. Inc., said Act 236 wasn’t intended to be the last shot, but the first step, for utilities and the state to explore green energy production.

Kassis said South Carolina was right to be careful in its initial regulation, but solar adoption among residential customers and now businesses has been popular enough that the program could be expanded, so the company supports a review of the law.

“Actually, we really like how the framework of 236 was set up. It created a lot of symmetry,” Kassis said. “A lot of the limitations that were built in as well as the benefits were balanced against each other. We think the same framework is right. It is an appropriate time to address a policy change. The state’s ready for version 2.0.”

Kion North America recently flipped the switch on the largest solar array in Dorchester County. A large part of the forklift manufacturer’s roof on U.S. Highway 78 in Summerville is covered by photovoltaic cells, with wires snaking to collection units that convert the light to electricity and send it to SCE&G’s power grid.

All of the energy Kion North America produces from its rooftop array and a field of solar panels outside the company’s headquarters in Summerville is sold to SCE&G at a fixed rate for 10 years.

“In terms of the total investment, it was certainly less than the 10-year guaranteed rate from SCE&G,” said Daniel Schlegel, vice president of operations for Kion North America Corp. “It’s still a heavy investment in terms of cash capitalized for something like this, but nevertheless the numbers made sense for us.”

The power generation of Kion’s solar array offsets 80% of the company’s electricity costs, Schlegel said. Kion’s solar power array is part of a larger initiative by the company to get energy consumption down to single digits and included changing all of the facility’s lighting to low-consumption, LED bulbs.

“We looked at all angles: What could we do here locally?” Schlegel said. “One of the elements was our monthly energy consumption, which was obviously quite high in a factory of this size working in two shifts.”

He said that solar was an ideal initiative for Kion as part of its sustainability program because, in the end, the numbers made sense for the business.

“We should have done this earlier,” he said.

What a business should consider

Dawn Hipp in the consumer services division of the S.C. Office of Regulatory Staff said data show more residential solar operations have been undertaken in the state than have larger, industrial operations. Some of that is simply because residential solar installations are smaller, cost less and take less time to develop.

Larger, industrial-sized installations can collect and distribute between 1 megawatt and 10 megawatts.

Hipp also said many utilities have a community solar program that allows those with less to invest or without the room for a full solar array to participate in green energy generation.

Every two years, the Office of Regulatory Staff issues a report on net metering in South Carolina that details how incentives are being collected and how costs are being managed for utilities and the state. The first report was issued in July 2017 and shows more than $30 million in incentives have been paid to solar power generators selling back to utility companies. 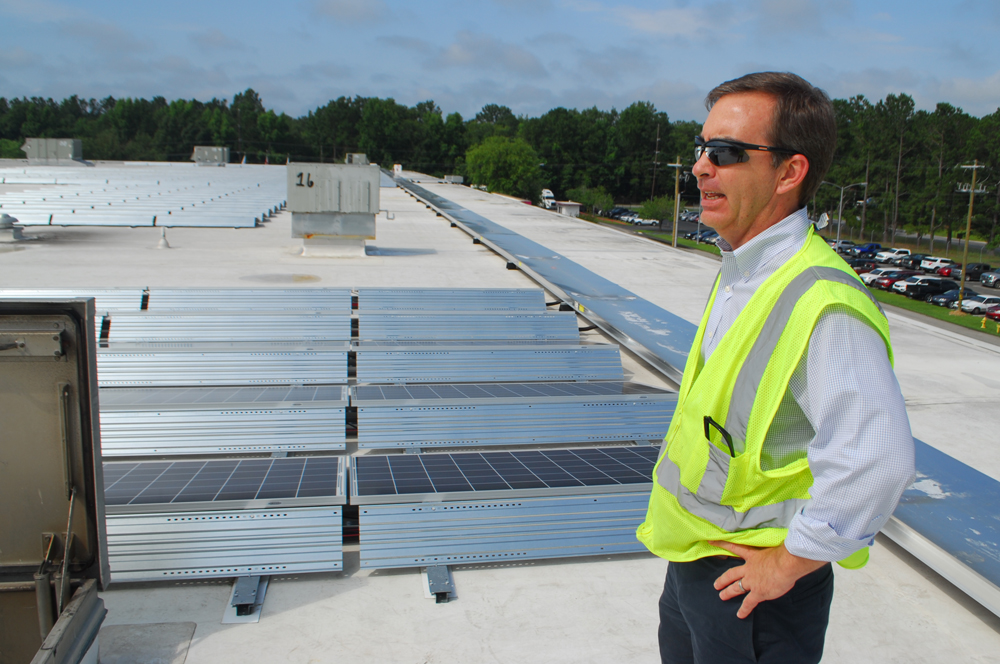 Jarrett Branham, vice president of operations for Alder Energy Systems in Charleston, worked directly with Kion on the company’s installation. He said Alder has seen an increase in commercial and industrial projects in the past 18 months, and he thinks this is reflective of where the industry is headed globally.

In addition to the Charleston area and South Carolina, Alder does work in the Northeast and other regions, sometimes full installations and sometimes front-end development and engineering work. Alder began 10 years ago as primarily a residential solar business, but that’s changed.

“Right now, we still have our residential arm, and that is about 25% of our business,” Branham said.

He said as more small to midsize businesses consider solar and renewable energy, the No. 1 question is about initial and ongoing costs and return on investment. He said that every solar project has about a five- to seven-year investment period when a company can expect capital to be tied up; beyond that is when the math begins to make more sense.

“I think the no-brainer question that you get is ‘How will this pay for itself?’ If I’m a business and I’m going to make the investment, I need to understand what’s it going to cost me and what’s the ROI,” Branham said.

Branham said Alder’s first step with any prospective client is to do an upfront feasibility study, which includes financial modeling over the life cycle of the project.

“Our goal in that is to see if there’s a project that’s viable — is there a reason for them to do something just beyond sustainability — and then we want to help them structure the project so that it makes the most financial sense,” he said.

Broadly speaking, if a project doesn’t pay for itself in the five- to seven-year range, it’s probably not going to work for a business. A lot of variables also determine the viability of the project, he said, including how committed the business wants to be to renewables. But he said most look for a balance between green energy and the bottom line.

“Once you’re looking at the financial modeling and see a system that pays for itself in five to seven years, and then you know you’ve got another 20 to 25 years, depending on your agreement with the utility at that energy offset — it becomes pretty eye-opening for clients long term,” Branham said. “If you were truly looking at this as a long-term asset, you see the benefits.”

Schlegel said Kion North America saw the initial 10-year agreement with SCE&G as only the beginning of the company’s solar project, for that reason. Once the contract is up, the system is expected to continue generating electricity for an additional 15 years and can likely be upgraded as technology advances in the renewables sector.

Branham said there’s talk about increasing the solar cap from 2% to 4% at the legislative and regulatory level. He said that when Boeing Co. covered the roof of its final assembly plant in North Charleston with solar panels, it created a buzz in South Carolina about business and industrial applications of solar power generation.

“What Boeing did — I guess, politely, I would say they forced the issue from a South Carolina perspective on renewables; and now projects like this at Kion are based on a company that has a strategic plan on sustainability, but it also financially makes sense,” Branham said.

Kion North America’s solar production system can produce 1 MW of electricity, and Schlegel said the company considered going higher, but the incentives and regulations made it less than ideal even though the costs would not have been much more once the project was underway. The entire project, from start to finish, took about a year.

“From a roof capacity point of view, we could have done a little bit more maybe,” Schlegel said. “We looked at that because obviously when you do an investment like this, it would have been not much more compared to the initial investment.”

Kassis said the state needs a comprehensive energy policy that includes the next step for green power generation. He said the state has done a good job of ensuring that Act 236 was broad enough that the market could determine what would be viable for the state, and solar won.

“You’ve got people who are really focused on just small pieces of energy policy legislation. But you can’t lose sight of the fact that you’ve got to be comprehensive,” Kassis said. “Act 236 started creating the right policy. Economics essentially created the winner in the market instead of favoring just one certain type.”

Branham agreed that Act 236 created a runway for companies such as Alder, and the shift from residential to industrial and commercial shows that businesses are pushing for more latitude in energy generation.

“We’ve gotten there faster than anyone thought they would. I think everyone has seen that aspect of where we are,” Branham said. “Largely, I think that shows the adoption of renewable energy, solar specifically, in this state has been well-received.”

This story originally appeared in the Sept. 17, 2018, print edition of the Charleston Regional Business Journal.