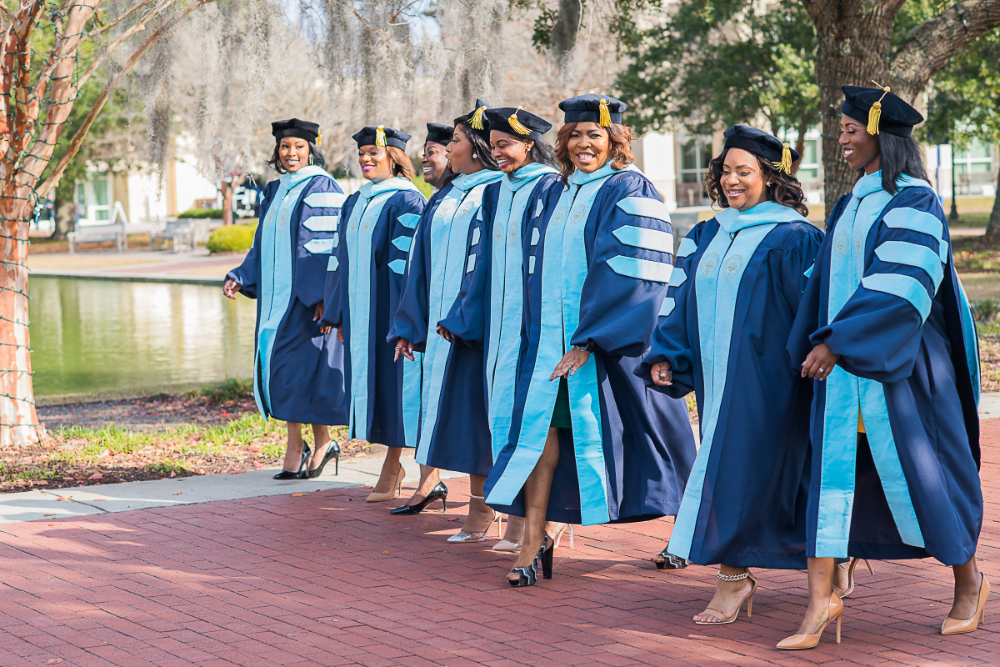 Though graduates’ faces were half covered, there was no mistaking the excitement in their march.

Twenty-three students received a doctorate of education in leadership degree from Charleston Southern University in December, the first group to graduate from CSU’s inaugural doctoral program.

The first cohort of graduates to cross the stage received the highest academic achievement available — and the journey there was no easy feat. Students took three years of evening classes and unprecedented modified online learning during pandemic protocols.

Although the doctorate degree fell under the department of education, graduates were professionals spanning many careers, including military, nursing, firefighting, criminal justice and more.

Robert Doan, interim chair of the EdD program and assistant dean of the College of Education said prior to the track, there was a “big hole” in the Lowcountry for an in-person doctoral degree with only the University of South Carolina offering the program.

Doan came to CSU in North Charleston three years ago to assist with getting the doctoral program accredited by the Southern Association of Colleges and Schools Commission on Colleges.

Today, more than 100 students are enrolled in the Ph.D. education in leadership program, with graduation expected every three years.

Students enroll in cohorts of around 20 students per class and work closely with one another, holding each other accountable and encouraging one another throughout the three-year evening classes all the way through writing and defending their dissertations.

“Students really buy into the cohort model and buy into the idea that it’s not just an individualized degree. It’s also that, for three years, you and your (colleagues) are going to get together on Tuesday nights and do life together and learn about leadership and how to produce new knowledge,” Doan said.

A milestone in the first cohort was the inclusion of eight Black female graduates, representing more than 30 percent of the group’s total graduates.

Pricilla Johnson, assistant principal at Joseph R. Pye Elementary School in Ladson, was in that group.

“One of the statistics I found is that only four percent of doctoral graduates overall are Black women, so we definitely broke that percentage,” she said.

Johnson’s dissertation focused on culturally responsive teaching and best practices to help support students, especially Black males, who are marginalized or underrepresented so that they are not inappropriately placed in special education — information she can pass along to other schools in her district to spur change.

“Each educational degree I’ve earned has given me access to a bigger seat at the table to speak about things I’m passionate about, with an emphasis on giving a voice to minority students,” Johnson said. “People see you a little different when they see ‘doctor’ in front of your name or additional letters behind your signature, and they tend to value what you have to say more.”

A doctorate degree in her position also came with a pay increase through the State Department of Education.

“When I think about how we had to get 60 credit hours and less than a year to produce a dissertation worthy of being produced in a database, it’s mind-blowing this was able to happen in a three-year span,” Johnson said. “I’m shocked at my ability to do that and work a full-time job, and many of us had families and children, so everybody had some adversity or obstacle. It was definitely the hardest thing I’ve ever done, but the most rewarding by far. This is my second time going through CSU, and I’m proud to again to be an alumni of CSU.”

Following the success of the first group of cohorts, Doan said CSU plans to expand its doctoral program, which already includes a doctor of physical therapy program. Doan said the school will be looking at new disciplines in the future that can encompass many professionals.

He adds that early on, the university’s leadership saw a demand that could lead to two cohorts a year — one starts in January, and one starts in June.

“The world is always changing, and I definitely foresee more doctoral degrees coming,” Doan said. “The next step might be a counseling doctoral degree.