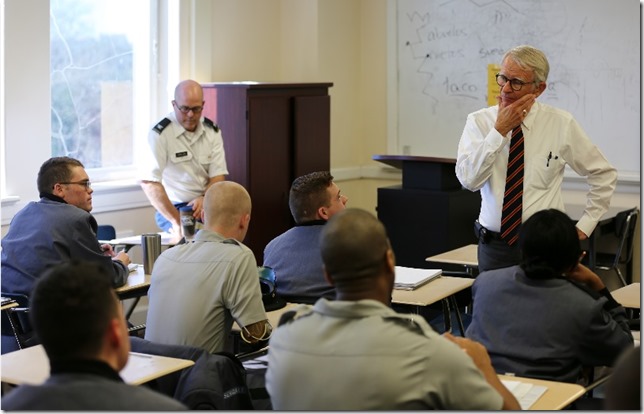 Since transitioning from City Hall to The Citadel, former Charleston Mayor Joe Riley has been a guest lecturer in several political science courses. (Photo/The Citadel)

Two hours after leaving his post in January as mayor of Charleston, Joe Riley arrived at The Citadel to start work as an endowed chair of American government and public policy, according to a news release from the military college.

Since transitioning, he has been a guest lecturer in several political science courses, and he played a key role in scheduling two-time Pulitzer Prize winner David McCullough to speak to cadets this month, the news release said.

“Mayor Riley is widely considered to be one of the most influential mayors in American history,” Citadel cadet Wilson Hope, a political science major, said in the news release. “The entire corps is excited to have such a well-known and respected leader on campus.”

In March, Riley will be a panelist in a discussion on the Emanuel African Methodist Episcopal Church shooting and the Charleston Strong movement during the 2016 Principled Leadership Symposium. He will also deliver the keynote address at The Citadel’s Symposium on Southern Politics.

“I am so pleased to have the opportunity to share my experiences over the last 40 years with cadets and students at The Citadel, especially as I used to sit in one of those seats,” Riley said in the news release. “I will continue to serve the city of Charleston by teaching these young leaders who will one day go out into our community and serve across many different sectors.”

Riley was a second lieutenant in Foxtrot Company, second battalion of the S.C. Corps of Cadets in 1964.

Now, back at his alma mater, he is working in the Department of Political Science, where he’ll write his memoir, be interviewed for an oral history of his career, lecture on campus and help arrange guest lecturers. Additionally, he is working on the newly launched Riley Initiative, a program to document and learn from examples of effective leadership, the news release said.

“The Citadel is proud to have former Mayor Joe Riley return to his alma mater after four decades of leading the city of Charleston,” Citadel President Lt. Gen. John Rosa said in the news release. “He epitomizes the leadership and service-before-self we seek to instill in our cadets.”