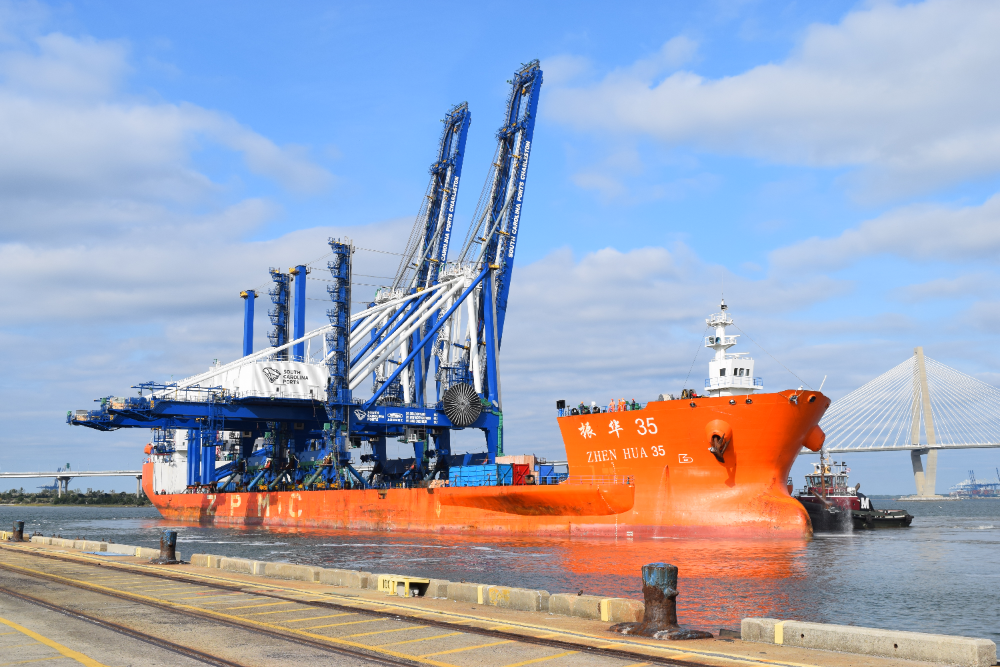 The set is complete.

The cranes docked at Columbus Street Terminal, where S.C. Ports Authority crew will spend a few days dropping sea fasteners and other rigging that hold the booms upright before the gear can be transported under the Ravenel Bridge.

Since redesigns began for the terminal in 2014, four of the former cranes have been renovated and raised. The others will all have been replaced with the arrival of these final two.

“It’s our duty to be an economic engine for the state,” said Ed Stehmeyer, SCPA general manager and projects and design manager. “As a part of that, we’re building the infrastructure needed to make sure we can handle the cargo demands in the future.”

The two new cranes cost nearly $11.5 million each. Coming in at 3.8 million pounds apiece, they have a lift height of 155 feet. The cranes are taller than the previous Wando set, but shorter than the Hugh K. Leatherman Terminal cranes because they were designed years ago when the projected ships were smaller than they are today, Stehmeyer said. HLT cranes clock in at 169 feet.

“We’re obviously not done improving these facilities and whatnot, but like I said, we started this in 2014, and it takes time,” Stehmeyer said. “We’re projecting far out, and we’re trying to make sure we have timely infrastructure for what’s coming ahead.”

For Wando Welch Terminal, that’s getting the final two cranes up and running. Once they arrive at the terminal, one berth will be shut down for a couple days while the parts are offloaded. The SCPA will need another four to five months to fully reassemble the equipment and get everything working.

The SCPA is also looking into a wharf extension as part of a plan to use barges to transport cargo containers at Wando Welch Terminal to HLT.

Wando currently has three parking spots for ships, but plans would extend the wharf 700 feet so that a barge can slip into a fourth spot.

“Since you’re putting things on the barge and taking it to a facility, then putting it directly on a rail, we’re taking all that traffic off the road,” Stehmeyer said.

The cranes arrived in Charleston after leaving Shanghai in mid-August. They were manufactured by ZPMC, who has made the previous cranes for Wando Welch Terminal and HLT.