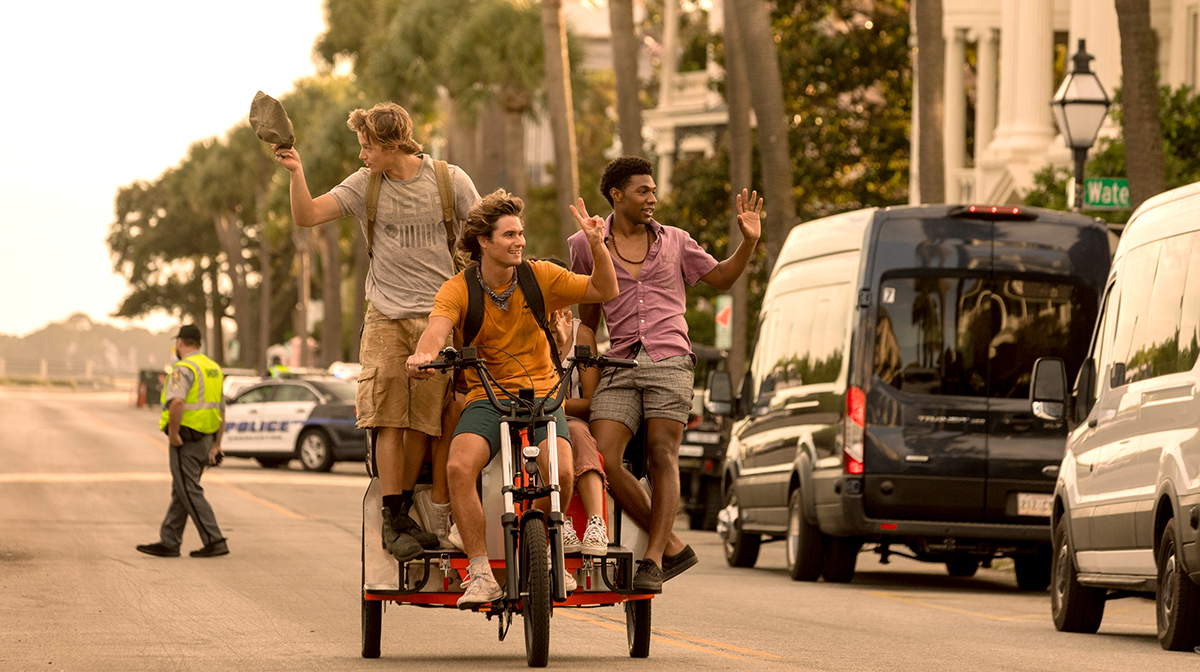 This past year, there’s been a major shift in film and television consumption toward streaming services. Red Notice, starring Dwayne Johnson, Ryan Reynolds and Gal Gadot, went straight to Netflix becoming the most watched film in the service’s history at 364 million hours in the first month.

Amazon, HBO, Netflix, Paramount Network and more services are churning out new products around the clock, and the S.C. Film Commission is ready to facilitate as many productions as possible in 2022.

“And it’s not just us,” he said. “There’s no stage space in L.A., Atlanta. Every place that has filming has more filming than it can handle, and we’re among that.”

At the Commission’s Columbia office, Storm said he and Project Manager Dan Rogers are inundated with interest in filming in South Carolina, mainly small-budget features and series productions.

Planning ahead, Avengers star Paul Bettany visited the Lowcountry in October with his writing partner, Dana Brown, to view locations for a movie they co-wrote.

“It’s awesome that we have Paul Bettany and other stars coming down for Righteous Gemstones, which is a huge hit for HBO,” Storm said. “These guys are doing it because they love the script, and they love the fact that they can shoot in Charleston. They can go get coffee and not get swamped by people versus shooting a cameo spot on another show in Atlanta where they have tons of pap.”

Interest in filming in South Carolina has grown immensely over the years because there are now a lot more mediums to publish content, Storm said.

“You don’t have to rely on movies and movie theaters so much anymore. You have an easier avenue for people to consume the product,” Storm said.

A tale of success to come out of the state is Netflix’s drama Outer Banks, which has primarily filmed in the Lowcountry since 2019. When the second season was released in July, the series shot to the top and remains one of the service’s most watched series of the year.

The attention has also drawn tourists to Charleston.

Alex Goldstein, general manager and tour guide for Charleston Outdoor Adventures on Bowen’s Island, said since the summer of 2020, patrons have been loving their kayak tours for the overlap with Outer Banks, including marshes, waterfront homes and Bowen’s Island Restaurant, which was featured in season two — albeit with temporary signage changes and decorations.

“I would do kayak tours and at least a couple times a week, someone on my tours — even when we’re not talking about anything like that — will ask if this is where Outer Banks was filmed or say that the scenery looks like the show,” Goldstein said.

While tours don’t intend to focus on the Outer Banks connection, Goldstein said she has had specific requests from fans of the show. One dad in particular requested a private tour for his daughter and a group of teen girls to learn about the places Outer Banks was filmed. Goldstein happily obliged and sent out a captain who was a mutual fan of the show.

Heading into 2022, the state continues to be limited by its $15 million annual incentive budget, which primarily is allocated to Outer Banks and Righteous Gemstones. But an extra $15 million earmark the organization was awarded in the summer will help fund some of the newer projects.

Storm would like to see what proposals come up in the beginning of the year before he plans how to spend the entirety of the earmark. He’d also like to use some of the funds to grow statewide outreach for more filming, in particular for increasing internship opportunities and furthering filming education.

“There’s a really good program in Charleston through Trident Technical College that we partner with. They have interns on set, and they have a great indie grant program, which is awesome,” Storm said. “But I would love to do something not just Charleston-centric. That’s kind of my thought for the future. I don’t know what that’s going to look like yet, but I would love to use funds for that, for increasing awareness.”

The S.C. Film Commission already has been in contact with a company in Greenville looking to bring the same kind of production energy to the upstate. Storm also hopes to collaborate with University of South Carolina, which recently increased its media art presence.

The inevitable goal is to increase production interest statewide, to make incentive money worth it for everyone, not just the bigger markets, Storm said. If movies only film in Charleston, what’s in it for places like Clarendon or Marlboro counties?

But more and more money is piping into Charleston because that’s where the talent and support services have been built.

“If we had more money, we’d be able to have more resources, but if we don’t have more crew to back it up I don’t know if there’s a point,” Storm said.

Righteous Gemstones and Outer Banks will get to work filing their third seasons later this year, and Storm said, “For now, we’re just keeping the train rolling and seeing where things go legislative-wise.”