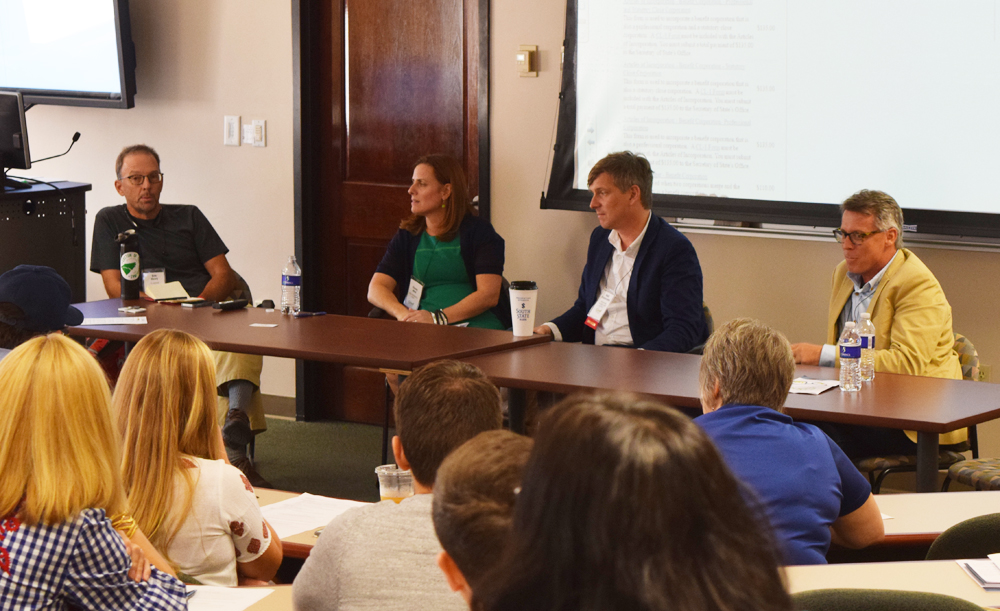 Of more than 1,800 Benefit Corporations across 50 countries certified by B Lab, just two are based in South Carolina. Thirty-three B Corps are headquartered in North Carolina, and six are in Georgia, according to B Lab, a nonprofit that offers private certification of B Corps.

Certified B Corps — including the Etsy e-commerce platform, Warby Parker eyewear and Patagonia Inc. outdoor apparel, for example — agree to look out for social and environmental concerns when conducting their business and put those concerns over their profitability.

They might donate a percentage of their profits to charity; employ women and minorities in management; use on-site renewable energy; hire suppliers from low-income communities; or give bonuses to non-executive members, according to B Lab.

In the Palmetto State, Good Done Great Inc. in North Charleston and The Rose Group on Lady’s Island are the only B Lab Certified B Corps, which Lowcountry Local First Executive Director Jamee Haley says is concerning.

She hosted a session during the organization’s recent Good Business Summit to encourage area companies to consider pursuing the B Corp designation.

“As a society, these are the types of business models that we need to be moving towards more and more in order to address the multitude of needs that we have within our communities,” she said. “We have 5,000 nonprofits in Charleston, and unless business changes the way that they do things and they function, then those nonprofits are not going to be sustainable, right? And maybe it gets to the point where we don’t need as many nonprofits. I mean that’s the ideal. Nonprofits are here to serve a need, and if businesses are able to serve that need, then we don’t need as many nonprofits.”

Haley discussed 10 reasons why a business should become a B Corp, based on a list of reasons provided by B Lab:

1. Being part of a community of business leaders with shared values. “We hear so much about being Silicon Harbor,” she said. “What if we decided instead of trying to be you know the next Silicon Valley that we wanted to become the community that’s best known for the most businesses that are socially and environmentally responsible?”

She said if multiple B Corps are in one area they can lean on one another as a support system.

2. Attracting and keeping the best and the brightest. “I hear from our members all the time the struggle with attracting and keeping qualified employees, and we know more and more that people want to work for a company that is values-based,” she said. “When you can establish yourself as that and you’re known as a B Corporation, we know that more people are going to want to come and work for you.”

Business school graduates of universities such as Yale, Columbia and New York who go on to work for B Corps are eligible for some student-loan forgiveness, Haley said, which is attracting more millennials to those companies.

She said the custom printing and dyeing business allows customers to use a T-shirt’s label to track its production online, including where the cotton used in it was grown.

“The idea of that transparency really helps build credibility and trust,” she said. “Nobody likes to feel like they’ve had the wool pulled over their eyes, and when you have a business that you feel like is being really open with how they have structured themselves, with what their values are, with how they’re investing in their employees, then I think that really helps with that trust with the consumer. So it’s a great way to market your business.”

Henry urged business owners to change the way they do business.

“I’ve lived in a time when things like climate change happened under my watch,” he said. “We have got to have businesses that look beyond the bottom line, because that, in my opinion, is why we have the problems we have today with social inequity and environmental disasters.”

4. Generating press. “If all you’re talking about is your profits at the end of the day, OK, that’s great. Good for you,” Haley said. “But if you’ve got a great story about the good your company is doing in your community or globally, that’s a much more compelling story.”

She said media outlets are much more likely to publish a story that people can talk about than a story about budgets and numbers.

5. Benchmarking and improving performance. To become a certified B Corp with B Lab, businesses must score at least an 80 out of 200 on an assessment. Once certified, B Corps recertify every two years.

“The idea is that within those two years, you’re working towards improving the practices within your company. You can also look and see how you compare to other companies that might be in a similar type of business as yours,” she said.

6. Attracting investors. The number of impact investors — those who are looking for social and environmental impacts in addition to financial benefits — is growing, Haley said.

“Forbes stated that in 2015 impact investors committed more than $15 billion to 7,551 deals. So these aren’t small numbers,” she said. “People are interested in these types of companies. I think that they see them as more sustainable, and I think that they know that consumers are looking for companies that they feel like they can trust.”

7. Protecting the mission of the company. Haley suggested that a company should write down its values and include those in its articles of incorporation.

“When you are taking investors, they need to understand that those are the values and that those values sometimes will trump the profits that you’re making, that you are going to look at your environmental and your social impact, and those two things come before what the bottom line is,” she said.

8. Building a collective voice. “This is not just a national movement anymore,” Haley said. “It’s an international movement, and when you can put your business out there as a business as a force for good, you are in such great company with so many other people.”

9. Saving money. Some B Corps provide business-to-business discounts with other B Corps, and some cities and states give incentives. San Francisco, for example, provides some modest tax incentives and procurement preferences to B Corps, Haley said, and Philadelphia is currently considering incentives for those certified businesses.

B Corps in South Carolina are not entitled to any property tax exemptions.

10. Leading a global movement. Businesses in countries around the world have adopted B Corp principles and are putting their focus on people, the planet and then profits, she said.

“Many of these companies are helping to address some of our biggest environmental and social problems, creating jobs in underdeveloped countries and providing goods and services to those in need,” Haley said.

How to become certified

B Lab offers Certified B Corp status, while the state of South Carolina allows companies to incorporate as Benefit Corporations. B Lab certification is not required by the state, said Christy Ford Allen, an attorney at Wills Massalon & Allen LLC.

The S.C. statute “basically allows you to file a form with the secretary of state where you say, ‘I want to be a B Corporation under this statute,’ and then there are requirements for your board and how you identify your purpose and what your filings are,” Allen said. “It also allows you to convert an entity that you already have to become a B Corp.”

She said the state requires Benefit Corps to file annual benefit reports with the secretary of state based on third-party standards, such as B Lab. There is no structure or process that mandates a B Lab certification though.

For instance, businesses can become Benefit Corps with the state and then pursue B Lab certification if they choose to, or vice versa.