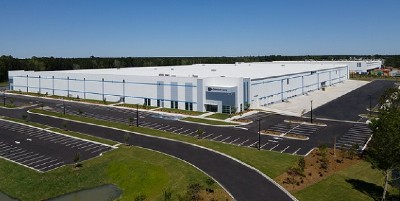 In addition to constructing the core and shell of the facility, Frampton Construction completed a full-building upfit for Sagebrook Home, a California-based home décor company that will occupy the entire space, the news release said.

Developed by The Keith Corp., the 430,920-square-foot cross-docked facility is constructed of concrete tilt walls and a structural steel frame. It features a 36-foot clear height with 50 dock doors and two drive-in doors, along with 105 trailer parking spaces and 243 car parking spaces on site.

“We kicked off our first project in the Charleston Trade Center in 2017 with the construction of IFA’s facility, and it’s been so rewarding to witness the evolution of the park since then,” Chad Frampton, president and CEO of Frampton Construction, said in the release. “The successful delivery of this campus is a testament to the collaborative spirit of the entire development team.”

Sagebrook Home’s building joins five other industrial facilities on the campus, four of which were constructed by Frampton. This Charleston Trade Center is a 2.5 million-square-foot development, with all buildings fully leased, the release said.

Frampton Construction has offices in Charleston and Charlotte.