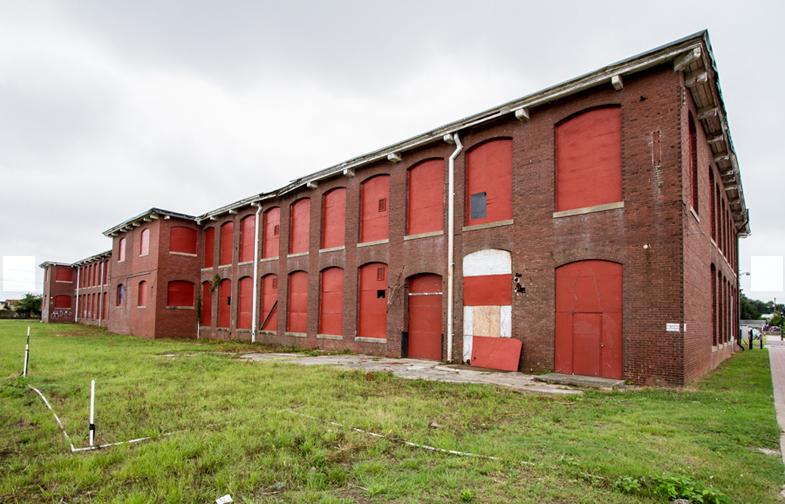 Click arrows to advance slideshow. The outside of the Garco building shows the industrial nature of the architecture, which was focused on functionality and durability. (Photos/Kim McManus) 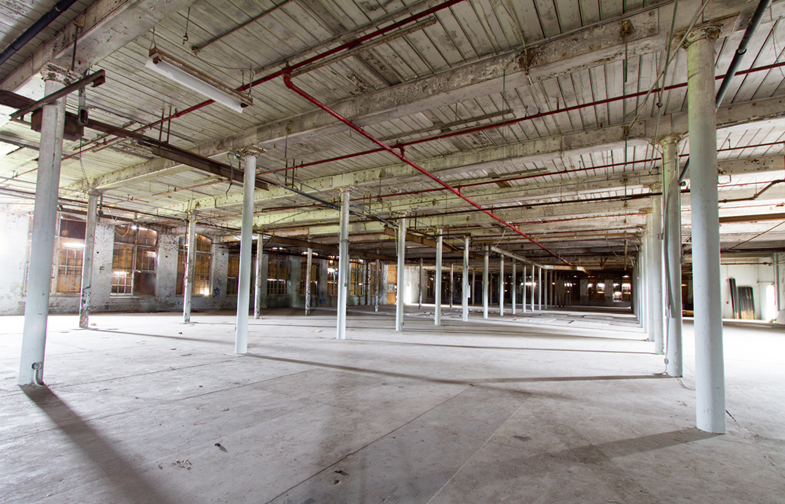 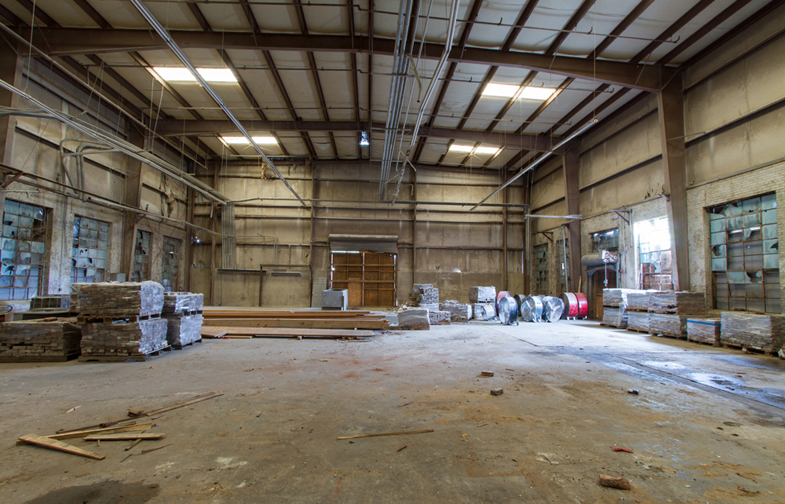 Some 25,000 square feet in the Garco building will become an 18-stall food hall. Part of the building that juts out from the main structure (above) will become a semi-outdoor, beer garden-like area. 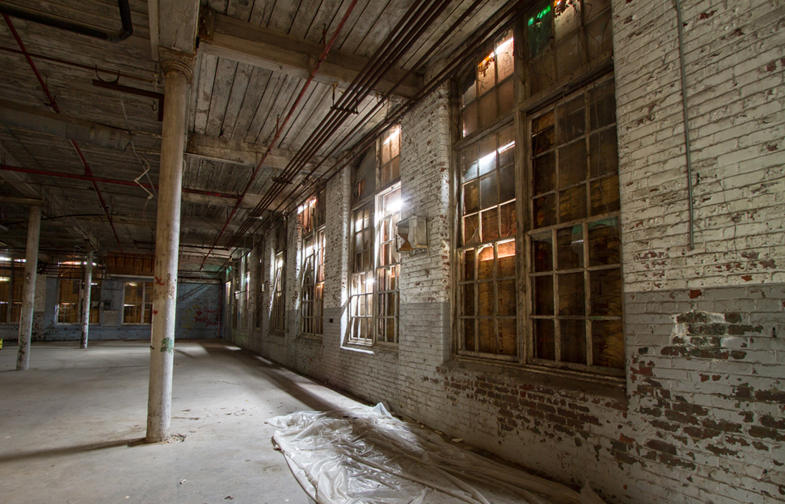 Developers at the Garco site hope to maintain a lot of the character of the original building, which was used to manufacture asbestos textile products decades ago. 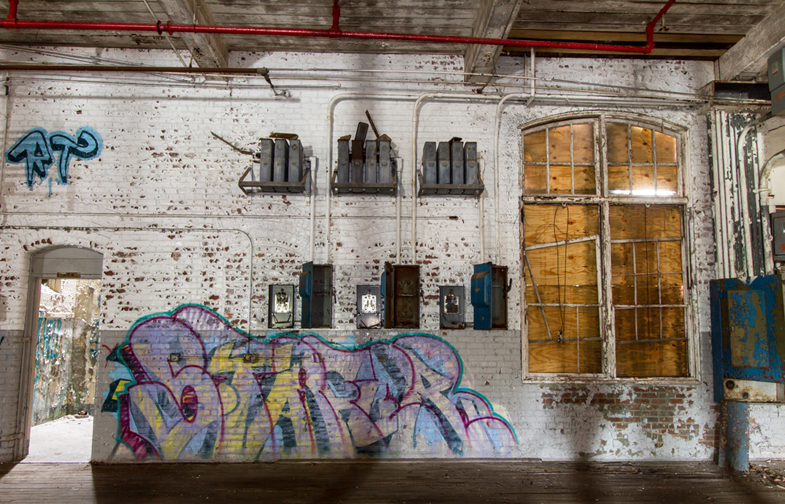 Graffiti adorns some of the walls inside the Garco building, which street artists used as a canvas.

Cracks of sunlight sneak through the boarded windows inside the long-vacant General Asbestos and Rubber Co. plant in North Charleston. White paint peels on the walls at every turn, some of it masked by brightly colored graffiti.

In some places, holes in the ceiling give glimpses of the second story above. Old piping and ducts remain, remnants of an industrial site that is no more.

The former factory, a red brick building sandwiched between Virginia and O’Hear avenues, is an integral part of the area’s history. An entire industrial operation and community grew around the mill, one of North Charleston’s biggest employers for much of the 20th century. Homes and stores were constructed to support the workers and their families.

The plant produced asbestos textile products for a variety of purposes, including building materials for homes in the Park Circle neighborhood, fire-proof capes and space shoes for astronauts.

When operations shuttered in the 1980s, the mill building and surrounding industrial site sat untouched for decades. The Beach Co. bought the roughly 40-acre tract out of federal bankruptcy court in 2002 with plans to redevelop it.

Environmental remediation and demolition started in the early 2000s, and numerous development plans have come and gone. Several projects are now moving forward and preparing for construction, and one is nearing completion.

The planned renovation of the former Garco mill building is a major part of the overall revitalization plan. Garco Mill Partners, a group of local investors led by Charleston developers William Cogswell and Jay Weaver, bought the mill building and several adjacent parcels with plans to redevelop the property into a mixed-use site.

Although the century-old building needs extensive work, the concrete floor on the first level and the old pine flooring on the second level are in mostly good condition, and the floor-to-ceiling beams throughout the space stand strong.

“This building has a lot of character, and it’s going to be beautiful when it’s finished,” Cogswell said.

If the various projects planned for the Garco site come to life, a large swath of land in Park Circle will be transformed from an old mill and vacant land into a bustling commercial and residential area with shops, offices, restaurants, apartments, parking spaces and a new city park.

Kent Johnson, vice president of acquisitions and development for The Beach Co., said he hopes the entire Garco site “will be an economic engine, like the old industrial plant used to be. ... We’re just updating it more to retail, multifamily and a live-work-play scenario.”

Ray Anderson, special assistant to North Charleston Mayor Keith Summey, said the city wanted to see the Garco site redeveloped after the mill closed in the 1980s but struggled to entice developers.

“We wanted to rebuild the meat on the bones around Park Circle and create a tax base,” Anderson said.

The development company began the intensive and expensive work of demolishing the old industrial buildings — except the main Garco plant — and performing environmental cleanup on the brownfield site. The recession slowed plans for the project. Site prep work continued but most new construction stalled, Johnson said.

Originally, The Beach Co. planned to revamp the Garco site into a rail-served industrial site, but discussions with the surrounding community shifted those plans toward mixed use.

Adams Outdoor Advertising, a billboard company, was the first to put roots down on the Garco site after revitalization efforts began, opting to build its headquarters at 4845 O’Hear Ave. in 2008.

In 2015, work began on The Factory at Garco apartments, The Beach Co.’s 271-unit multifamily project on about 12.5 acres along Chateau Avenue. Construction will finish this summer and 50% of the units are now leased, Johnson said.

The apartments create another option in the community for people to walk from their homes to restaurants, shops or offices, he said.

The city is investing in streetscaping improvements on surrounding streets and the widening of Empire Avenue — which intersects O’Hear and Chateau avenues — to three lanes to prepare for an influx of people.

Johnson said the overall concept is to have the Garco site’s commercial and residential components connect with the surrounding community — becoming an extension of the Park Circle neighborhood and the East Montague Avenue retail district.

North Charleston asked The Beach Co. to save the Garco plant from demolition. City leaders wanted to find a new use for the historic site.

The city bought the Garco building and some surrounding parcels, encompassing about 6 acres, in 2013 from The Beach Co. for $1.5 million, with plans to transform the brick building into the city’s new Cultural Arts Department, which would include an art gallery and a 300-seat theater.

The city soon abandoned those plans after finding renovations to be too costly, Anderson said.

Cogswell was interested in the project, having recently renovated the Cigar Factory in downtown Charleston into high-end office, retail, restaurant and event space. Cogswell and his partners worked out a deal with the city to buy the Garco mill and the surrounding property and redevelop it into commercial space.

‘A real connection to it’

The 86,000-square-foot former Garco mill will become primarily offices with some retail space.

Roughly 25,000 square feet inside the Garco building will be set aside for an 18-stall food and beverage hall. Part of the building that juts out from the original structure will become a semi-outdoor, beer garden-like area.

Cogswell said the project involves a mix of modern and historical elements, “making for an interesting juxtaposition.”

“I love old buildings,” Cogswell said. “This project definitely has its challenges, like the longtime leaks and holes in the floor, but structurally it is in very good shape. Buildings from that era were built to last.”

Cogswell plans to use the Cigar Factory as a blueprint for the Garco project — in terms of financing and tax credits used to pay for the $18 million redevelopment, and also in terms of historical preservation and design.

“We like to leave it as original as possible,” Cogswell said. “It’s hard to create character, and this building has a lot of it, so you want to leave it there and let the building be what it is.”

Cogswell expects the space to be move-in-ready in a little more than a year, and the boarded-up windows will be replaced by real ones, flooding the space with light.

“This is an icon for North Charleston. It’s a big part of their history. It’s one of the most historical properties in the city,” Cogswell said. “There’s a real connection to it, and we all want to make sure it’s done and done right.”

Cogswell also plans several developments on the land next to the mill along O’Hear Avenue. The anchor tenant will be a six-screen movie theater accompanied by two commercial buildings, totaling about 75,000 square feet. Construction on the movie theater is likely to begin by early fall. The other two projects depend on tenant leases.

The future of some of the land adjacent to the old mill building is unknown after a recent deal fell through.

The Beach Co. sold a 6-acre tract to Palmetto Brewing Co. last fall. The brewery planned to relocate its downtown brewing operation there.

Those plans changed when Palmetto’s owners recently had the chance to buy their longtime site at 289 Huger St. in downtown Charleston for $2.9 million. That purchased canceled the move to the Garco development.

“When it came down to it, all signs pointed to staking our claim in the place Palmetto has called home since 1993,” Palmetto Brewery owner Larry Lipov said about the downtown site. “There’s a lot of history and great memories for us in this space, so we took the leap.”

Palmetto is in the process of selling the 6-acre tract back to The Beach Co.

“The site is too important to the city, to The Beach Co. and to the Garco Partners to let it go out on the open market, so we’re buying it back,” Johnson said. “We want to control what happens on that site, and how it happens and what the uses are and what it looks like.”

Johnson said the company might develop the tract into a mixed-use space with multiple buildings for office, retail or multifamily.

“We love the idea of a destination brewery, but that’s not going to happen,” Johnson said of the site, “so now the opportunity is ‘What can we do that will be equally important to Park Circle?’”

There is a great need for a grocery store. Whether Publix, Harris Teeter, or smaller one like Trader Joes it would definitely benefit the surrounding neighborhoods to have a local place to shop.

I agree about the grocery store. A Trader Joe's or Sprouts Would be great.

A sushi restaurant. Equally important to us park circle residents.

We need a Grocery Store and not a Food Lion or Bi-Lo (no offense) but something along the lines of a Publix or Harris Teeter. Harris Teeter has a small store in Myers Park in Charlotte or a Daniel Island sized Publix. Jack "Cowboy" Sisson Park Circle Resident