Meet the engineer behind @ChsWx

Jared Smith didn’t start Charleston Weather 13 years ago because he had too much time on his hands.

The long-time manager of software engineering at BoomTown and the Weather-Ready Nation Ambassador of Excellence founded the Twitter account out of a labor of love, sharing his passion for weather with his family and friends. The handle has now amassed more than 49,000 followers, including celebrities and politicians who vacation here, have homes here or are heading to events.

“Jeff Burton from NASCAR reached out asking me how his house on Kiawah was during Hurricane Matthew,” Smith said. 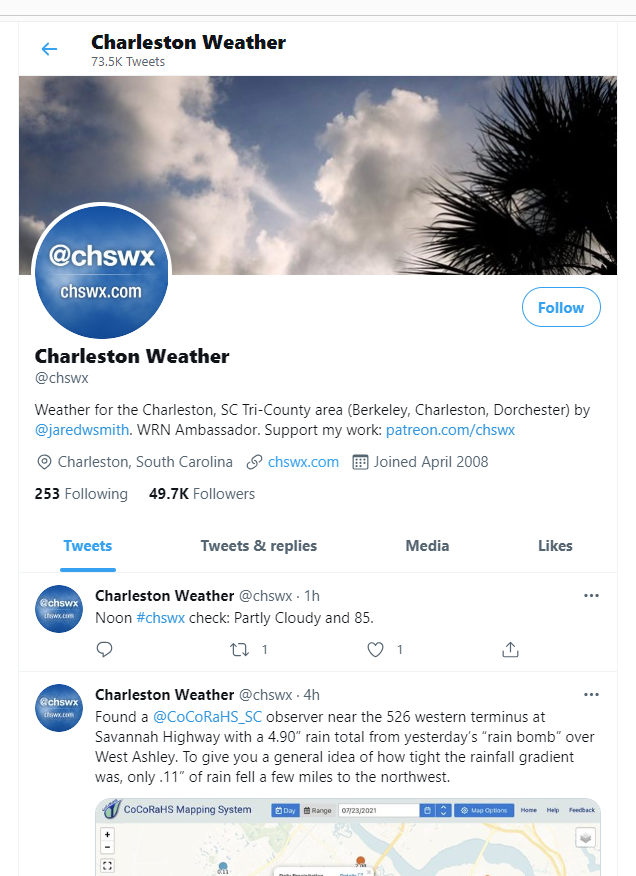 Charleston Weather (@ChsWx) offers breaking weather content for the Charleston metro area only, including Charleston, Dorchester and Berkeley Counties, which sets it apart from television stations that market to a larger, at times unrelated, audience, Smith said. There won’t be information about Columbia, Greenville, Georgetown or even Georgia on the handle that’s accessible on Twitter, Instagram and Facebook.

“The ultimate goal was to use this as a proof of concept to send national weather service warning information over Twitter just for Charleston,” Smith said. “With social media, we can target at a very local level. If it wasn’t about Berkeley, Charleston or Dorchester County, I wasn’t talking about it unless it was coming right for us.”

An engineer now, Smith went to college for journalism, and his collegiate skills have been essential for messaging the message discipline is essential, he said. Those who seek to connect with him for his puns and quirky comments can head to his personal account, but he keeps his messages at Charleston Weather strictly branded conversation.

“The one thing my journalism degree helped me do is become confident telling stories to people,” he said. “I learned so much about theory and the psychology behind it, which makes me an effective manager at my day job, but also an effective communicator when all hell breaks loose.”

Smith’s messaging is disciplined and his editorial stance is to keep quiet when nothing is going on to cut through the noise. This strategy stresses that when Smith is posting, something urgent is going on.

While @ChsWx is a side project for Smith, he has been a lifelong weather fanatic, writing about local storms, taking meteorology classes and streaming radar since the early 2000s.

“I not only can read an advisory, but I can translate it to people,” he said. “I can take radar images and put some context with them.”

At the start of his social media days, Smith took highly technical warnings and posted them himself, joking that he was the original bot for his program.

Over time, though, social media progressed, hashtags caught on and Smith’s reports gained momentum. Posting photos from neighbors in the throes of weather also boosted both his presence and the community’s trust in Smith as a local, reliable source.

“One thing that was really cool was we were able to take real-time reports, like photos of flooding downtown, and share them,” he said. “No one thought those photos would be helpful, but as it turns out, they were valuable.”

By 2011, Smith hit critical mass and the #CHSWx hashtag took off. Ten years later, Smith still runs the account solo, funding it out of his own pocket. He does have a Patreon account if followers want to help support the daily costs, but Smith doesn’t market it or post requests asking for donations.

“This is deeply personal for me. It’s very informative,” he said. “Take my education, meld it with my weird interests and I have fortunately been able to do something useful for the community.”