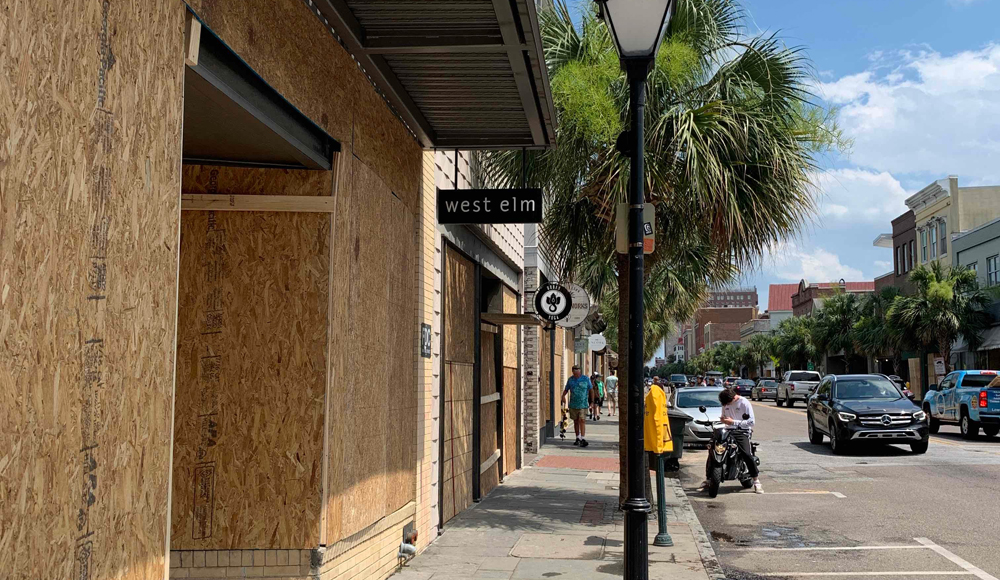 Windows and doors were boarded up at businesses across the Lowcountry on Sunday, a day after civil unrest in downtown Charleston, sparked by protests after George Floyd, an unarmed black man, died in police custody in Minneapolis.

Government officials across the region scrambled to call emergency meetings and quickly passed measures for curfews to keep people off the streets Sunday night, as protesters assembled near Hutchinson Square in Summerville. Police were a quiet but visible presence, as were firefighters.

Nearly every business in Summerville was boarded up Sunday; volunteers put up plywood on Richardson Avenue and Main Street.

On King Street in Charleston, the cleanup began early Sunday morning with people scrubbing painted profanities from the doors of their businesses, many of which had smashed windows and other property damage. 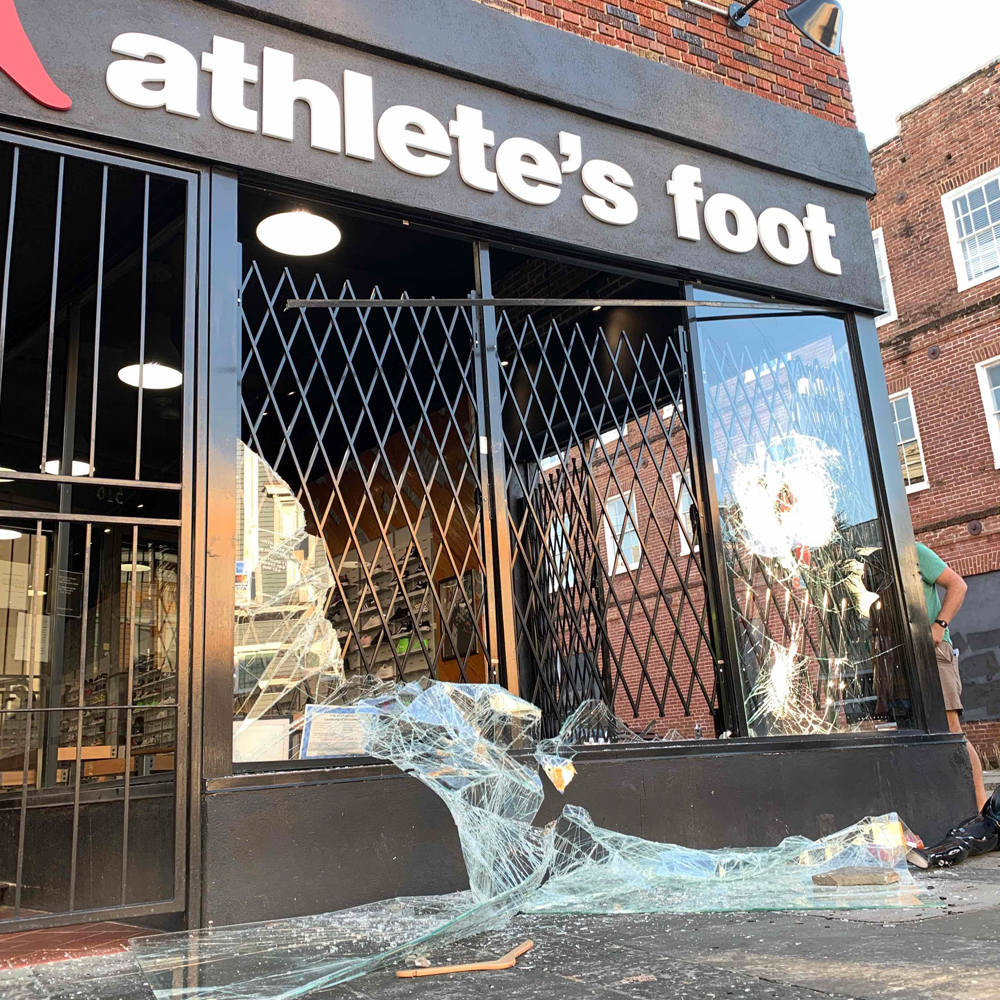 The business didn’t appear to have a lot of damage inside, though the plate glass window was shattered. The door where the sign was posted was untouched.

A hand-painted sign rested on the sidewalk outside another storefront with a broken window: I can’t wait to hug you when this is over!

Charleston and the Lowcountry were among many flashpoints as protesters of all ages and races came out nationwide to express their feelings and frustration over the death of Floyd and other black people who have been killed by police.

In North Charleston, Mayor Keith Summey asked for businesses to help tamp down any possible unrest.

“Although we do not expect any problems, we are asking businesses to voluntarily close starting at 5 p.m.,” Summey said in a statement. “We hold the right of protest to be self-evident, and we wholeheartedly welcome peaceful demonstrations. However, civil unrest and acts of violence will not be tolerated in the City of North Charleston.”

Summey said that Police Chief Reggie Burgess had positioned officers across the city to keep a lookout and to respond if it became necessary. 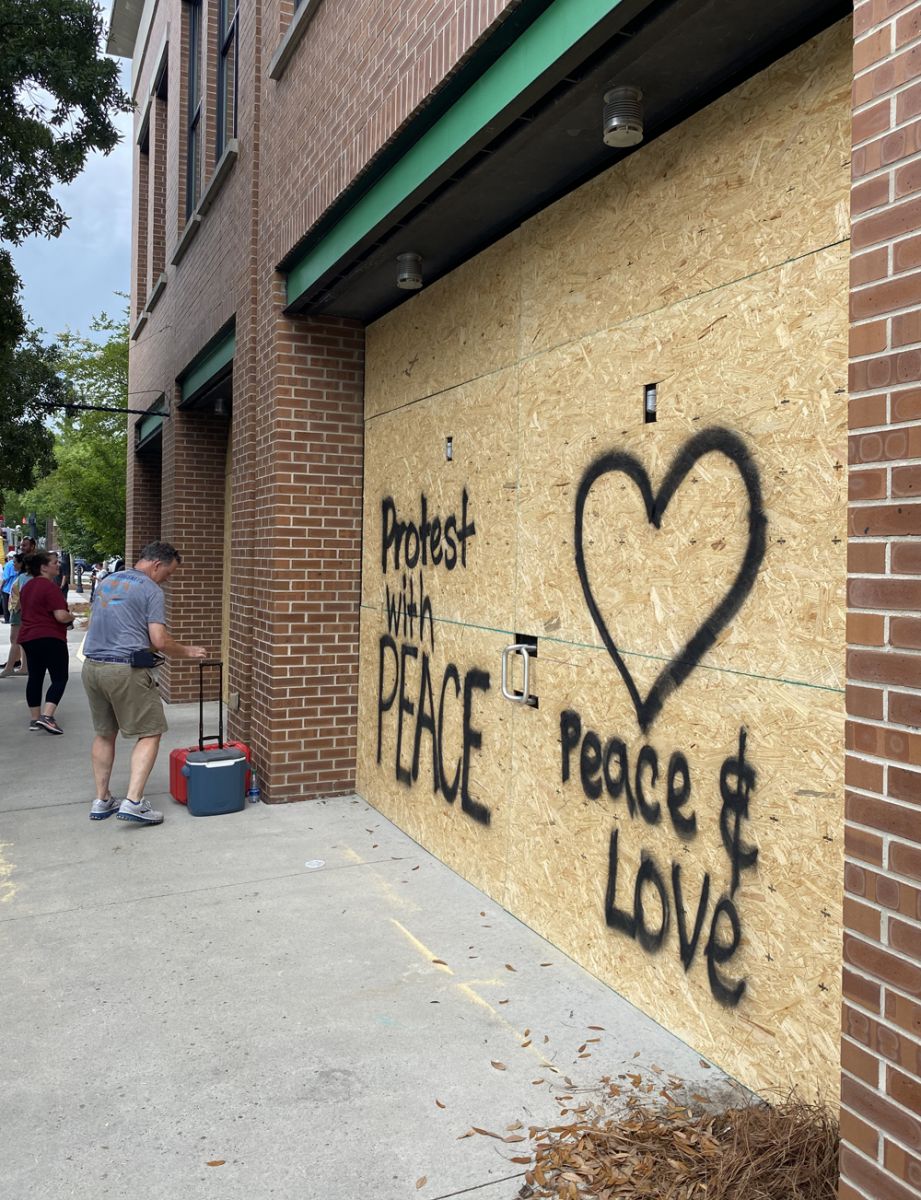 On Sunday afternoon, Rita Berry, president and CEO of the Greater Summerville/Dorchester County Chamber of Commerce, encouraged businesses to follow the town’s directive, especially on Main Street, to close if possible and to secure any loose items or furniture.

In a news release, Summerville said the town “fully respects the rights of individuals to peacefully protest” but that criminal activity and destruction of property would not be tolerated.

Patrick Bryant, Charleston-area entrepreneur and community outreach for EO Charleston, addressed the damage to businesses Sunday night. He said the entrepreneurial organization supports the “necessary change that must occur to ensure the fair and ethical treatment of all members of our society by law enforcement.”

“As community leaders and entrepreneurs, we especially understand the necessity to work tirelessly toward what you believe in, but attacks on innocent businesses have no place in Charleston,” Bryant said in a statement.

Several governments were calling special meetings Monday to determine whether curfews would be extended.