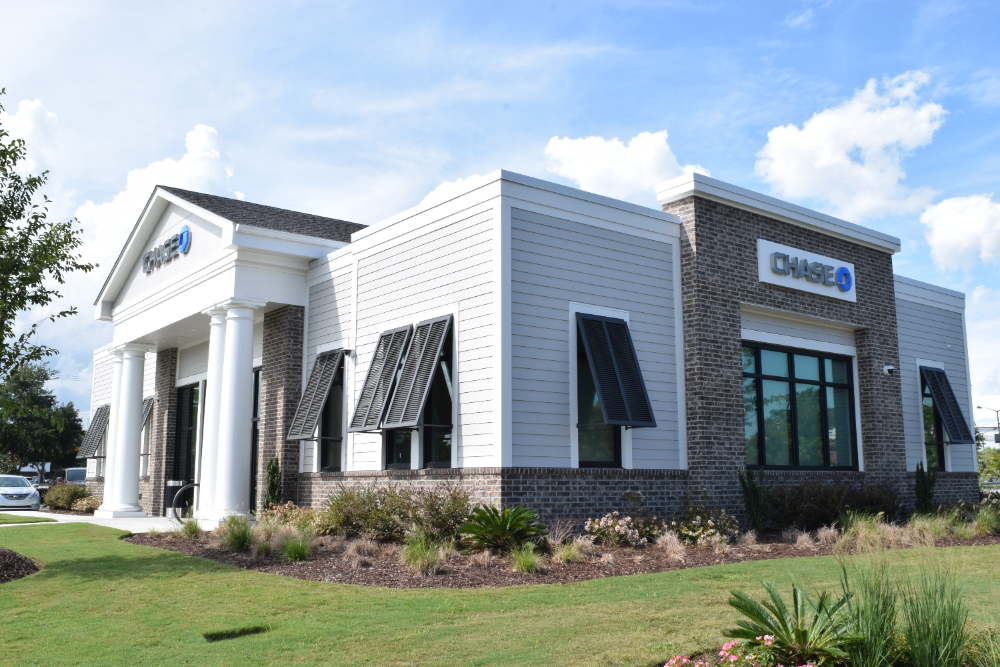 This story was originally published in the July 26, 2021 edition of the Charleston Regional Business Journal.

The banking industry has seen branch footprints shrink nationwide over the past several years as customers go mobile.

But South Carolina is going against that trend as the state had the highest number of new bank branch openings in the country last year, with seven new branches, according to S&P Global Market Intelligence data.

South Carolina is just one of four states that had positive net bank branches between 2020-2021, where the number of openings outpaced the number of closings.

Despite shutting down 334 facilities nationwide since January 2020, JPMorgan Chase & Co. added 222 new branches in the same time period, according to the S&P data. This includes expanding into South Carolina.

This growth into the Carolinas, including Charleston, was announced in 2019 as part of a statewide $20 billion, five-year investment in its business and local economic growth.

According to Allison Reed, a spokesperson for Chase Bank, the company has opened four branches and nine ATMs in the Charleston area to date.

A new branch is also in the works on James Island. It is set to be built at the corner of Camp and Folly Road, on a lot that previously hosted a Subway and a Pizza Hut.

“We expect to open at least one more branch in the market on Daniel Island this year,” Reed said.

While the S&P report states that the company’s 2021 first-quarter earnings indicate that branch transactions “remained suppressed as its mobile user count grew,” Reed said opening new branches also serves as a spur to economic development in the

“When we build a branch, it lifts the whole community around it — contractors to build the branches, cafes and other small businesses to support the customer traffic — it’s a ripple effect,” Reed said. “The firm is actively hiring staff to support its new branches in the Charleston area.”

“Since we announced our expansion into Charleston in 2018, we have been full steam ahead,” said Alfonso Hernandez, S.C. market director for consumer banking at Chase Bank. “By locating our branches throughout all parts of this vibrant and growing city, we can help make sure more people have access to the financial resources they need to grow and scale their businesses, to become financially secure and to create and grow wealth.”

Plans for two more branches and additional ATMs are in the works, Delie said.

“The Charleston region offers a great deal of opportunity with a favorable business climate, strong entrepreneurial scene, emerging tech sector and a world-class port,” Delie said. “It is also a market where we have had great success deploying our expansion strategy, which combines a solid commercial banking presence and investments in technology to give our customers a full-service experience.”

The bank’s success, he said, is a result of deep local ties within its leadership.

“We have been very conscious about hiring experienced people who are engaged in the community and are a fit with the bank’s culture, and that has made a difference, especially during the challenges of the past year,” Delie said.

According to the 2021 U.S. Mobile Banking Survey by S&P, conducted in February and March of this year, “Many customers were still using branches during the pandemic. About 36% of survey respondents indicated that they had visited a bank branch in the prior 30 days. Most of these respondents visited multiple times.”

The primary services customers sought at branches were related to depositing and withdrawing cash and checks. Nearly 50% of respondents used an ATM.

Although the national trend of in-person branches may be in decline, South Carolina’s banking industry is growing, with First National Bank even developing high-tech branches with advanced digital capabilities to keep up with quickly changing times.

“All of our branches in Charleston feature interactive teller machines, where customers can engage in live discussions with tellers using video chat during extended hours — seven days a week, and for 13 hours on weekdays — as well as our digital kiosks, where customers can learn about and shop for our products and services,” Delie said.