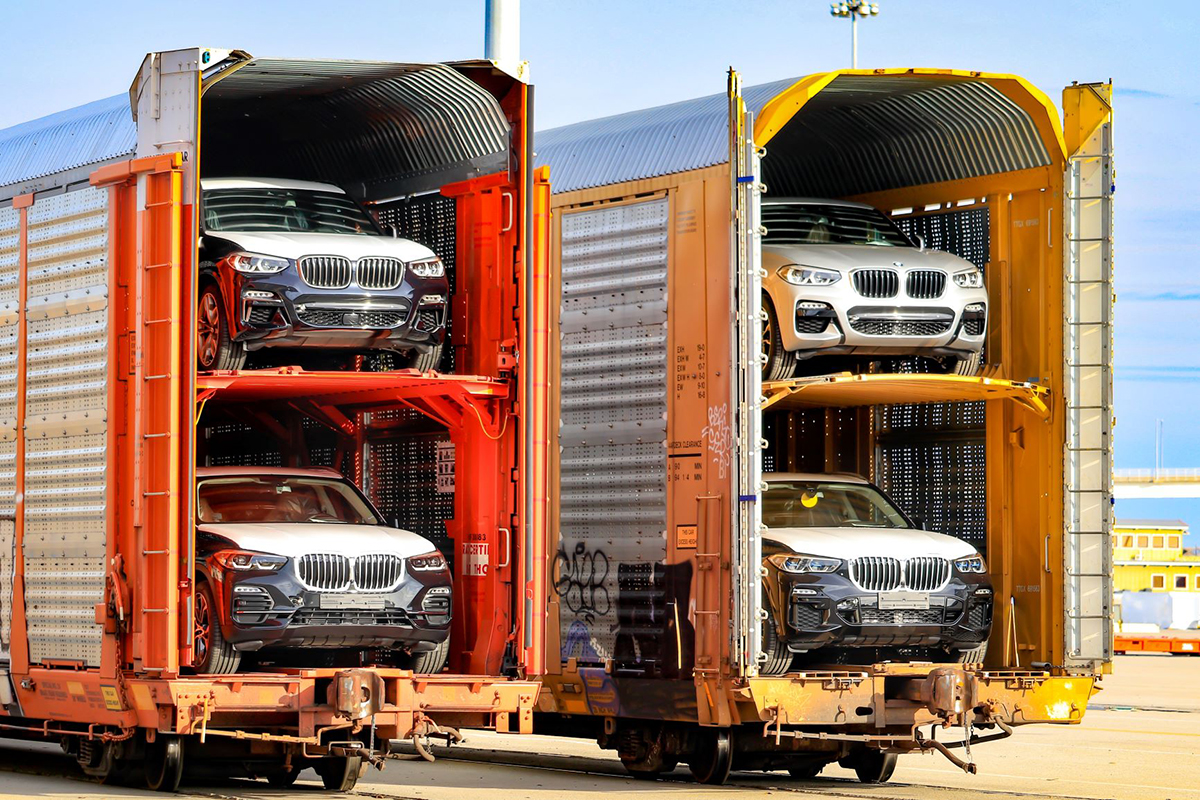 Byron Miller remembers when BMW first announced plans to export vehicles from the Port of Charleston in the early 1990s. He served as an intern then for the S.C. Ports Authority, but over the years his roles have changed, earning him a front-row-seat to the port’s growing relationship with the car manufacturer as director of sales.

Throughout the last three decades, automotive has become one of the largest commodity groups for the SCPA, especially as two-way volume is concerned, based on the scale, the number of employees and investments.

Today, the SCPA contracts with three original equipment manufacturers: BMW, Volvo and Mercedes-Benz Sprinter Vans, who all call on the Columbus Street Terminal. BMW, however, is at the core of the state’s automotive sector and recently exported its 3 millionth car from the terminal.

The company’s Plant 10 in Greer is BMW’s largest manufacturing facility in the world and the automaker is the largest exporter of both finished vehicles and containers at the Port of Charleston. More than 70% of the company’s vehicles come through Columbus Street Terminal, which is operated by the SCPA and fed by Palmetto Railways and Norfolk Southern.

“We have a lot of good customers, but BMW has met or exceeded every single commitment or forecast and projection they’ve made. It’s really a phenomenal story,” Miller said. “They really could go anywhere in the world, but you see these vehicles made exclusively here. To know they came from South Carolina is pretty cool.”

A lifelong South Carolinian, Miller describes the OEMs as the center of the state’s automotive industry, with a massive industry of Tier 1, 2 and 3 suppliers revolving around them.

“As it relates to the port, a lot of those companies rely on overseas suppliers whether they’re bringing in raw materials, components, parts that go into other parts, as well as the export volume,” he said.

President and CEO of BMW Manufacturing Knudt Flor visited shortly after the 3-million milestone, acknowledging that the car company’s success as the largest automotive exporter couldn’t happen without the S.C. Ports Authority.

“We export 70% of our South Carolina-made vehicles through the Port of Charleston to 125 countries around the world. BMW was also the first customer for SC Ports’ rail-served Inland Port Greer in 2013, which has proved incredibly beneficial to our supply chain,” Flor said during the visit. “We depend on reliability and speed to produce every car to order, and S.C. Ports continues to deliver for BMW.”

Flor toured the terminal two days in a row on his last visit, and Jeff Hollis, SCPA manager of crews, roll-on, roll-off and tariffs, said the CEO was incredibly happy with the operations.

“That fact that he comes and visits personally really shows the relationship we have with BMW and how important it is,” Hollis said.
Fast track to exports

With the exception of some Mercedes-Benz Vans and Volvo Cars vehicles that arrive by truck, all vehicles on the Columbus Street lot arrive by ship or by train.

Trains arrive daily carrying on average 800 vehicles — 10 on the bottom and 10 on the top of each rail car. Every single vehicle is then driven onto the terminal’s lot and held for a few days before they are rolled onto ships and exported globally to Europe or China within days.

“As of right now, we have it as a pretty well-oiled machine,” Yard Planner and Operations Coordinator for BMW Clint Cockfield said, adding the human-element is probably the biggest challenge.

Coordinating cross-traffic is key with so many moving parts to the terminal, especially on vessel days. Both longshoremen and dock workers are pulling the cars out of the lots and onto the ships at any given time.

From the moment the trains leave Inland Port Greer until they return back, the process to transport and unpack every vehicle takes approximately 48 hours, including train rides that consist of 12-hour trips each way.

Vehicles are then lined up in strategic rows based on their designation of where they go and when.

“Every row is gridded as a timestamp and location so we know exactly when the car was parked and where we put it,” said Adam Henderson, general manager of break bulk.

Henderson oversees the Columbus Street Terminal operations, where 6,000vehicles on average sit on the lot on a given day. The stevedores at Ports America coordinate the loading of vehicles onto the vessels while longshoremen physically move them.

The Columbus Street Terminal has been in operation since the 1960s. While the Wando Welch, Hugh K. Leatherman and North Charleston terminals primarily handle cargo containers, Columbus Street focuses on break bulk, vehicles, military vehicles, sometimes even personal boats and RVs — anything that needs to be shipped and can’t fit into containers.

“There’s no overhead and no massive equipment here, there’s also less training required for this terminal so the whole production is fast-moving,” Henderson said.

The terminal has direct lift capabilities between rail and the vessel, on-dock rail-served warehouses, access to cranes capable of lifting up to 700 net tons and open storage for vehicles, equipment, and project cargo.

The terminal also has berth space for up to five ships, capable of welcoming three 656-foot roll-on, roll-off ships. At least two ships a week call from Europe and one from China.

The pace is certainly different from the SCPA’s other terminals, but the automotive industry reaches throughout the state and globe. Various suppliers, service providers, warehouse operators and more from all over the world are consistently planting themselves as close as possible to the Port of Charleston.

“Michelin kind of started a lot of that foreign direct investment in South Carolina in the 70s when they located their North American headquarters here and started investing in manufacturing,” Miller said. “It really put South Carolina on the map.”

Prior to the pandemic’s shutdown in 2020, vehicles were up 27% year over year with Columbus Street moving 24,755 vehicles. While disruptions impacted the industry, the SCPA still ended the fiscal year ahead with 2.5% more vehicles. Since July, Miller said, the industry has been on a tear.

Numbers were already up 8.2% this March with more than 22,000 vehicles handled at Columbus Street as advanced manufacturers and automotive companies see growing demand for their products worldwide.

Having a reliable supply chain is critical to keep the sector going and automotive has some of the most reliable, Miller said.

“You cannot have shutdowns due to supply chain challenges. That’s where the whole Port of Charleston community has grown up,” Miller said. “Our motor carriers are proud of that (along with) our laborers. This is a very important tool for business in the automotive sector and how they produce.”
Miller said S.C. Ports Authority President and CEO Jim Newsome and COO Barbara Melvin, along with the board, set a strategic direction for the port that includes automotive as a way to serve the state’s regional economy.

“The South is pretty much where it’s at,” Miller said. “It’s where companies want to locate, where people want to move. Coming out of the pandemic, while there may be some shift back into entertainment-type spending, there’s still going to be large scale manufacturing, large-scale consumer demand and a growing region.”