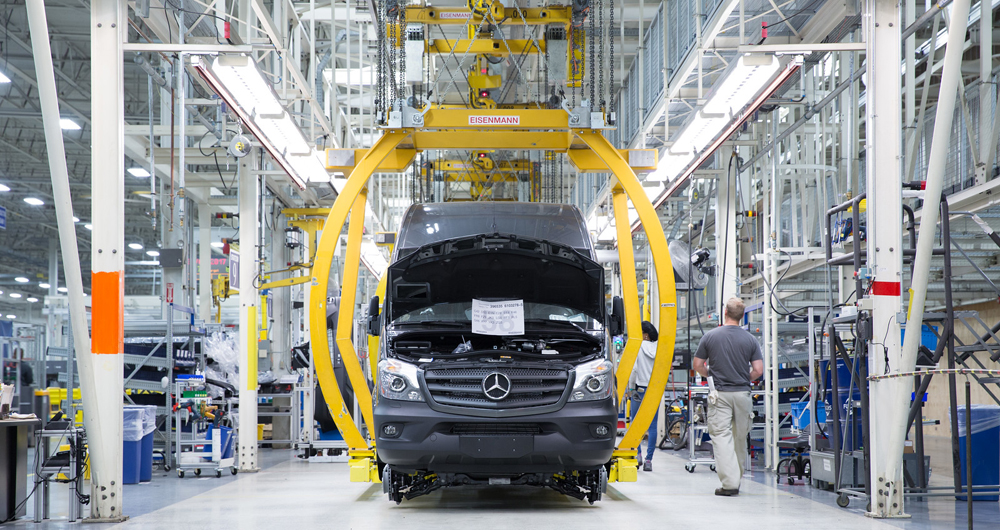 The $500 million expansion, which kicked off in 2015, is on schedule to roll off the first new vans by 2020. The investment will double the size of the site, triple the building’s square footage and grow its workforce by 11 times its original size.

The existing assembly and administration building will more than double in size, and a new 500,000-square-foot body shop and 500,000-square-foot paint shop now stand on formerly empty land. Some equipment has been installed in the buildings as construction continues. 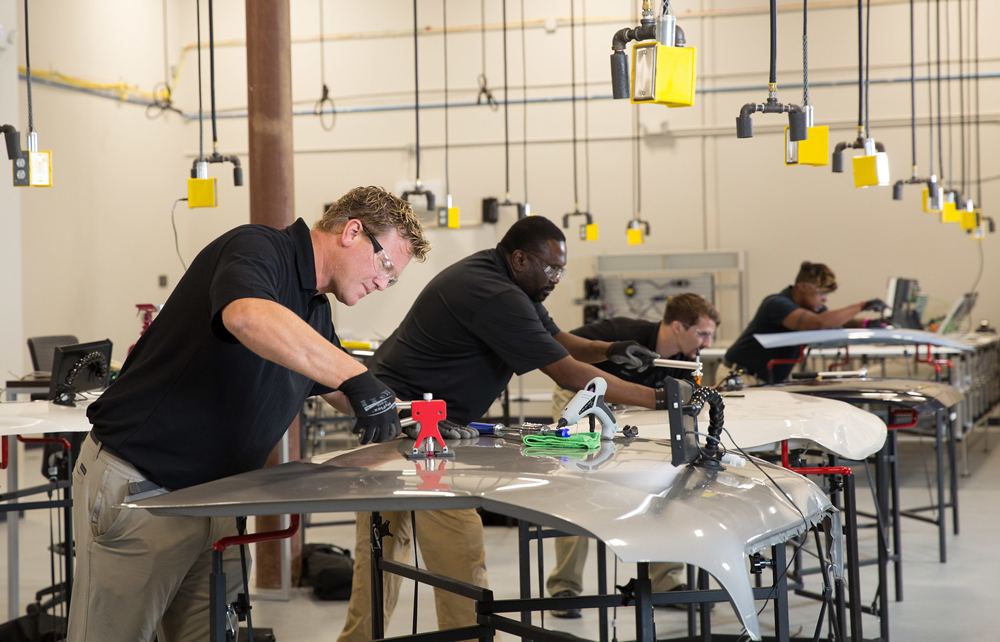 “You can see the progress each and every day, and it’s really, really amazing,” Michael Balke, Mercedes-Benz Vans president and CEO, said during a recent tour of the campus.

The expansion should open by mid-2018; the site will be fully operational by 2020 with a more than 1,300-person workforce capable of producing Sprinter vans from start to finish for shipment to North American customers.

For more than a decade, workers reassembled Metris and Sprinter vans — arriving in pieces from Europe — to avoid paying heavy U.S. import tariffs.

The expansion brings the Sprinter manufacturing process to the U.S. for the first time, eliminating the need to assemble the vans twice.

Workers and robots will weld parts together to create the Sprinter van bodies, which will then undergo painting.

The paint shop will clean, pre-treat, paint and cure the vans. Mercedes-Benz will use female emu or ostrich feathers to clean the surface of vans ahead of painting. Cleaned vans will enter a large tank to undergo a 360-degree rotation for painting. Thirty robots will perform the painting work.

After painting, the vans will head to final assembly, where workers will install interior parts such as dashboards and wiring. The automaker’s campus expansion increases its 400,000-square-foot assembly and administration operations by more than 1.1 million square feet.

Completed vans will head to the 2.8 million-square-foot marshaling yard to await a train or truck to pick them up for delivery to dealerships across the United States and in Canada.

“The next-generation Sprinter van will be produced part by part in the U.S. for the first time ever,” Balke said.

Metris vans will continue with the reassembly process for now, although Balke said that might change to full assembly in the future, depending on market demand.

Mercedes employed 130 workers when the expansion was announced in 2015.

Hiring of 1,300 workers is ongoing; the company is focusing on filling manufacturing positions going into 2018.

About 900 of the new employees will work in manufacturing, including maintenance technicians, paint technicians, body shop operators, assemblers and robot programmers.

Experience in automotive manufacturing is preferred but not required, officials said. Applicants will undergo assessments and interviews, and new hires will receive extensive training through ReadySC and on the Mercedes site, as well as possibly overseas. New hires have trained at Mercedes facilities in Tuscaloosa, Ala., Duesseldorf, Germany, and Buenos Aires, Argentina.

Balke said the Lowcountry’s growing manufacturing sector creates a competitive market for recruiting skilled labor. Volvo Cars will open its campus in Berkeley County in 2018, for example. But Balke said the job market attracts more people to move to the region, creating a larger pool of potential new hires. 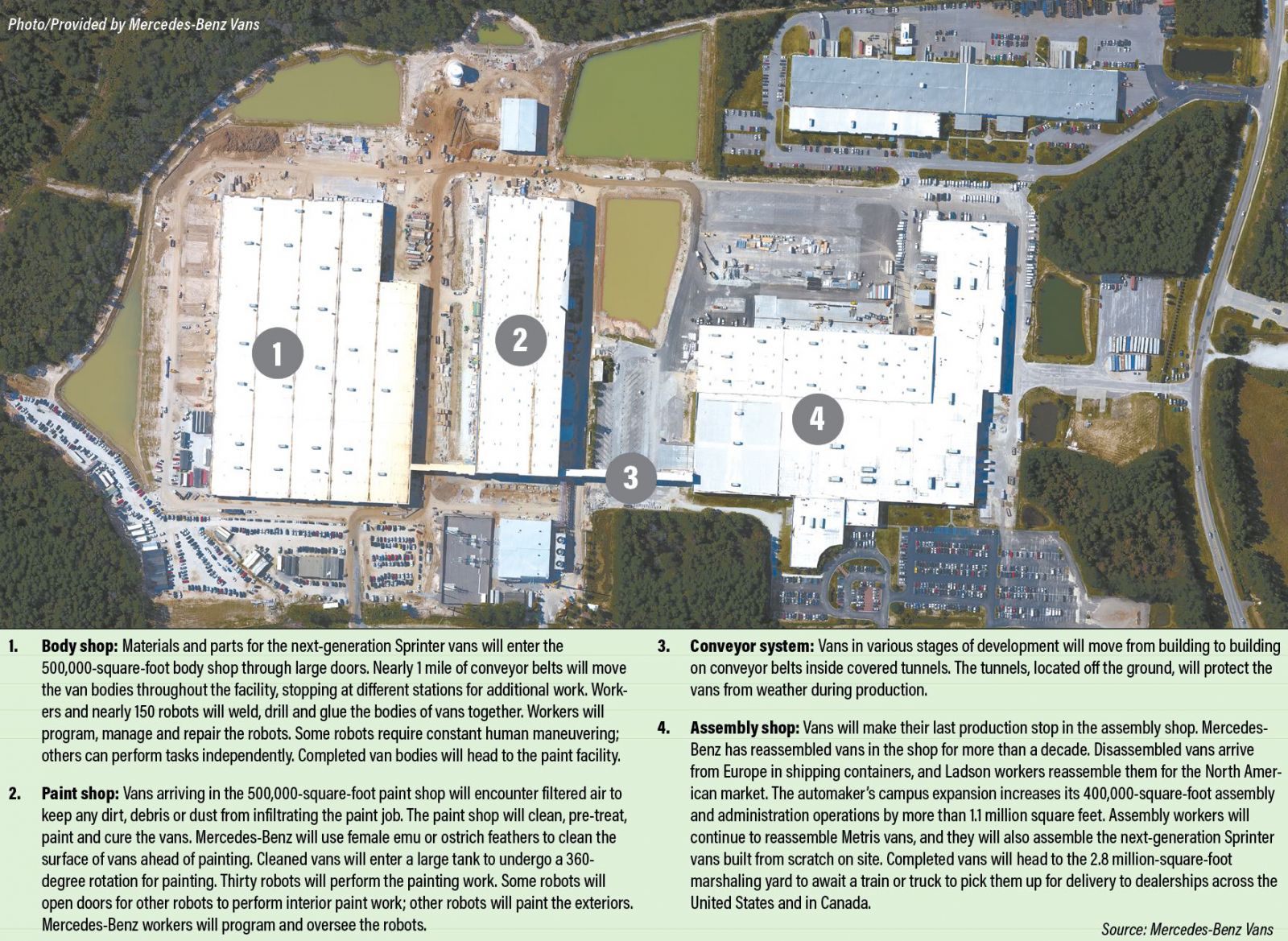 Automation will play a significant role in the Sprinter van production cycle, as many of the production employees will learn to program, operate, oversee and repair the nearly 200 robots on the campus.

“We can train someone how to program robots today, and that would have been something we couldn’t do 20 years ago,” said Mark Allen, Mercedes-Benz Vans’ head of body and paint.

Robots often perform repetitive assembly work, preventing ergonomic issues experienced by many production workers. Robots are also fast and precise, Allen said. If a robot is programmed to weld in a certain spot on a van body, it will not miss the mark by more than half a millimeter — smaller than the tip of a pencil.

“When you program them to go to a spot, they’re going to the exact same spot every time,” Allen said.

Some robots are programmed to perform work, such as certain types of welding or painting work, on their own. Other robots require a human to maneuver them to complete tasks. Workers hired to work in robotics will undergo at least four months of training.

“We have a lot of automation, but you have to have people that can operate, fix and program the equipment. ... At the end of the day, it’s people that produce these vehicles,” Allen said.

This story originally appeared in the Nov. 27, 2017, print edition of the Charleston Regional Business Journal.