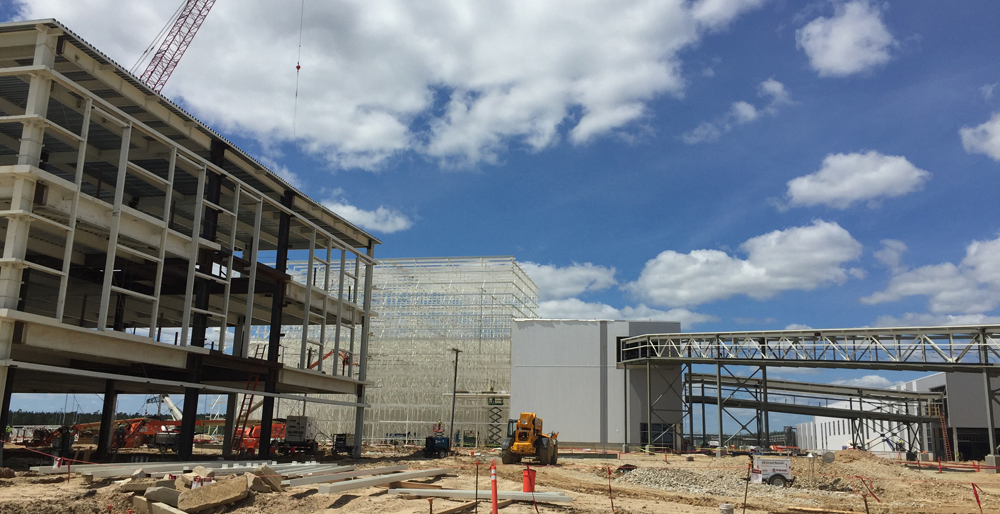 Less than two years after Volvo Cars’ North American CEO Lex Kerssemakers jumped into a bulldozer at the automaker’s groundbreaking event, much of the car manufacturing campus in Berkeley County is complete.

In an area of the county lined with tall pine trees, dotted with churches, homes and the occasional restaurant, the company’s massive manufacturing campus seemed to appear out of nowhere in the woods. 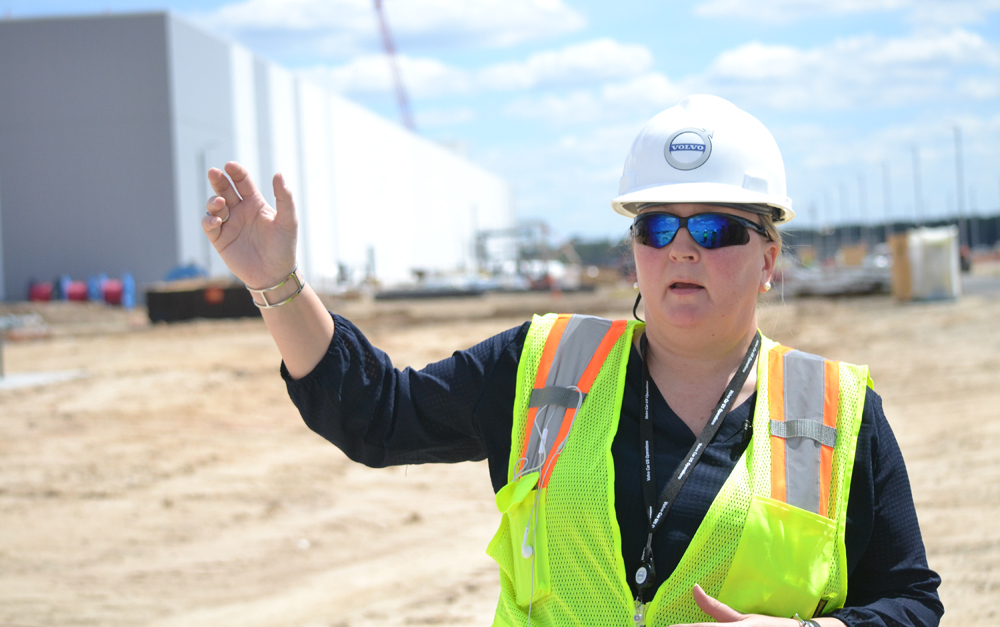 The body shop, paint shop and final assembly buildings’ exteriors are completed on the 1,600 acre-site. The steel outline of an office building and a storage area for partially finished vehicles now stands ready.

Construction crews still need to pour asphalt for a vehicle test track and a marshaling yard designed to store finished vehicles. Paving is ongoing for employee parking lots. Around 800 construction workers, managers and engineers are on site each day. Bulldozers and forklifts work noisily around the campus.

Much more work remains, however, before the first-ever S60 sedan rolls off the line in 2018, said Katarina Fjording, purchasing and manufacturing vice president for Volvo Car U.S. Operations.

The buildings — while standing and weather-tight — are not finished inside. Equipment and process installations have started in the paint shop. The body shop and final assembly buildings stand like giant, empty warehouses, awaiting machinery and a workforce. Robots sit in plastic wrap inside the body shop.

Fjording said she hopes to test equipment late this summer and have the first vehicle body completed by the end of the year. Full vehicle production will begin in 2018.

When operations ramp up, 2,000 people will work at the site to build the S60, which the company hopes will enamor the U.S. market again. 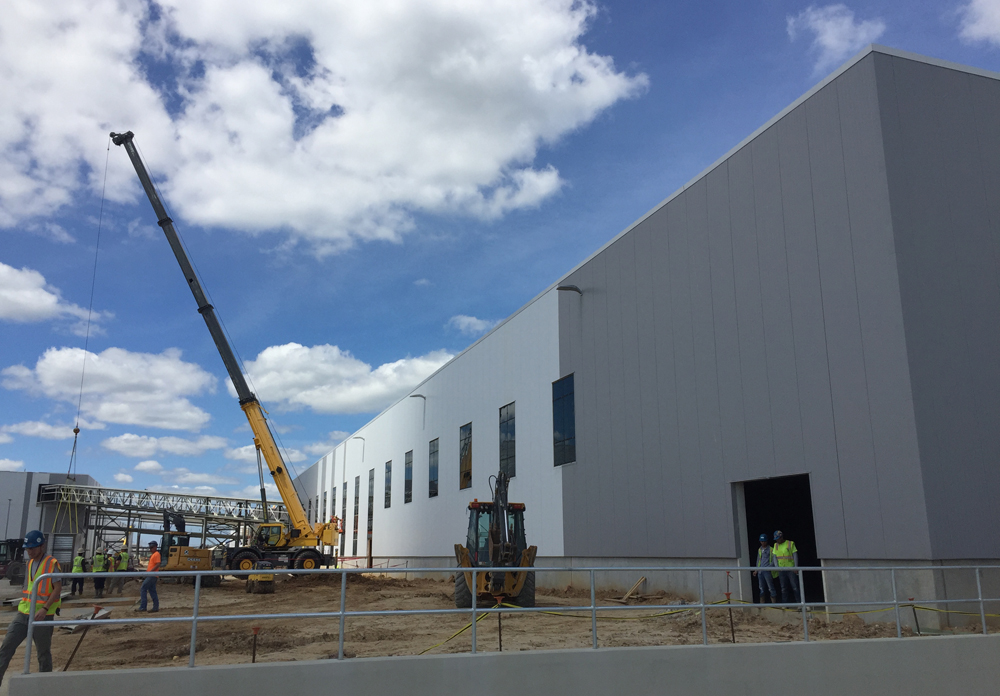 “This is how we can show this market that we’re serious about it and turn things around,” Fjording said. “This used to be our largest market. We want it to be first or second market again.”

Fjording, who most recently led the launch of three Volvo plants in China, is charged with getting the U.S. operation off the ground. She said the complex project involves much more than the campus buildout.

Work also includes equipment installation, establishment of a logistical footprint, vetting and securing of suppliers, hiring and training of thousands of production workers, IT setup for the site and the launch of a new vehicle model, as well as connecting with the local community.

“It really is a huge undertaking to build a full industrial footprint from scratch,” she said.

The Sweden-based, Chinese-owned automaker also wants to establish a purchasing and manufacturing organization at the Berkeley County site. That operation would support S60 manufacturing, as well as enable the production of a second vehicle at the site in the future.

The company has not decided whether a second vehicle will be built in South Carolina, but Fjording said it is “a possibility, absolutely.”

Work on the S60 will begin in the body shop. Cars will then head for the paint shop and will be completed in final assembly. A conveyor tunnel moves vehicles among buildings. Each car undergoes full inspections and a test track evaluation before it is deemed customer-ready.

Volvo workers and 300 robots will be responsible for building the body of the S60 sedan. After parts arrive by truck from suppliers, employees will work at stations around the 500,000-square-foot facility; each group will be responsible for welding a certain part of the car — the doors, parts of the floor and the sides. Those structures will then be welded together on the main line, which runs down the center of the building. The facility will produce about 15 car bodies per hour.

This 700,000-square-foot building has four floors where cars are cleaned, heat treated, sanded, sealed and painted. The facility must be kept completely free from particles floating in the air. A speck of dust could ruin a paint job. Workers wearing special overalls will go through a full-body air blaster to remove any contaminants before starting work. Volvo expects to paint up to 30 cars an hour.

This tall, white structure sitting next to the paint shop stores car bodies before and after painting. The cars are moved by an automated storage retrieval system — a computer-controlled system that automatically places and retrieves cars from storage locations — when it is time for more work to be done on them.

The 900,000-square-foot final assembly plant is where painted car skeletons are transformed into completed, customer-ready vehicles. The doors will be removed and go down one assembly line; the car body will go down another. Workers will add all remaining components before reattaching the doors. Completed cars will come off the line and head outside for the test track. Cars will re-enter final assembly after the initial test drives for final inspections. Finished vehicles are then stored in the outdoor marshaling yard, ready for transport.

Volvo will use the test track to evaluate each vehicle. Some of the test track, which has not been built, will imitate roads with cobblestones or sewer lids. Another part will have a hill to check the brakes, and one section will be a flat stretch to evaluate speed and noise. Cars will then return to final assembly for final tweaks and inspections.

To protect the cars while in production, vehicles will move from building to building on conveyor belts through covered tunnels.

Finished vehicles will sit in the marshaling yard awaiting transportation. CSX will have on-site rail by 2019 to move vehicles to dealerships across the country. Trucks will take the cars headed for export to the Port of Charleston’s Columbus Street Terminal in downtown Charleston. A new interchange, exit 186, will be built to connect Interstate 26 directly to the Volvo site.

This story originally appeared in the May 1, 2017, print edition of the Charleston Regional Business Journal.