An architect’s job typically ends when his or her design begins construction, but for a class of Clemson University students, the design was just the first step.

The 12 students at the Clemson Architecture Center in Charleston designed and constructed a pavilion and storage shed at the Medway Park and Community Garden on James Island as part of a semester-long class project meant to help students gain a better understanding of their work, said David Pastre, senior lecturer at the university and instructor of the class.

“This is the fruition of four months of work, start to finish,” Pastre said. 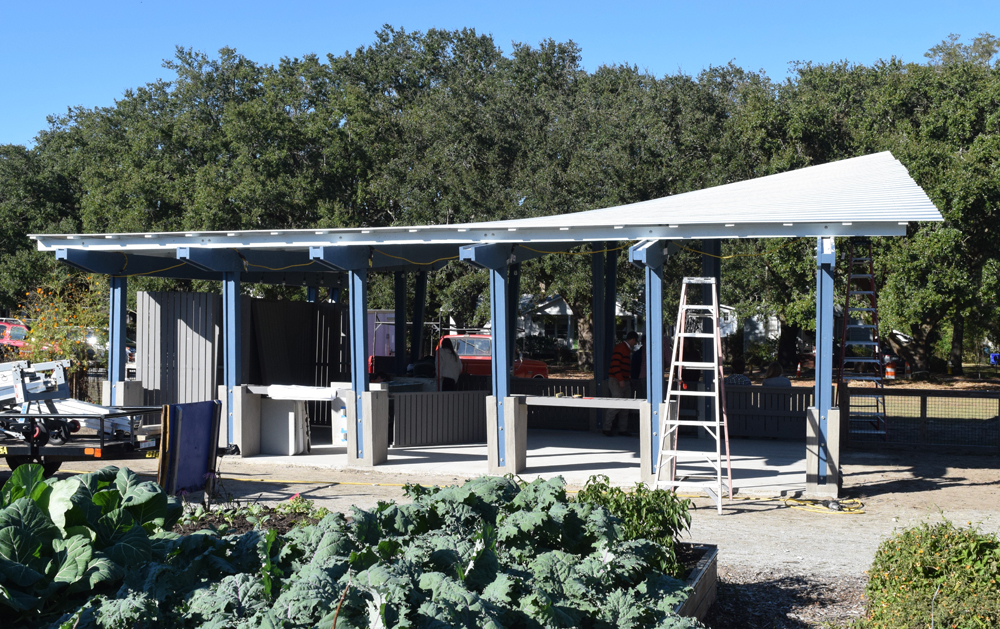 Medway Park and Community Garden opened in 2015, and plants are grown year-round, according to Leslie Wade, community garden coordinator for the Charleston Parks Conservancy. The conservancy also manages community gardens in Avondale and in the Elliotborough neighborhood of downtown Charleston.

Previously, the conservancy had been storing gardening tools in a metal trailer, which stood out from the rest of the garden’s more rustic theme, and there was no space for community gathering in the garden.

Now, benches and tables line the wooden pavilion; a basin in the pavilion to wash fruits and vegetables can be covered with a fitted plank to become a table; and a storage shed holds the conservancy’s tools.

“We hope with the conservancy to be able to do some more programming there: classes, events and what-not for the neighborhood and James Island area,” Wade said. 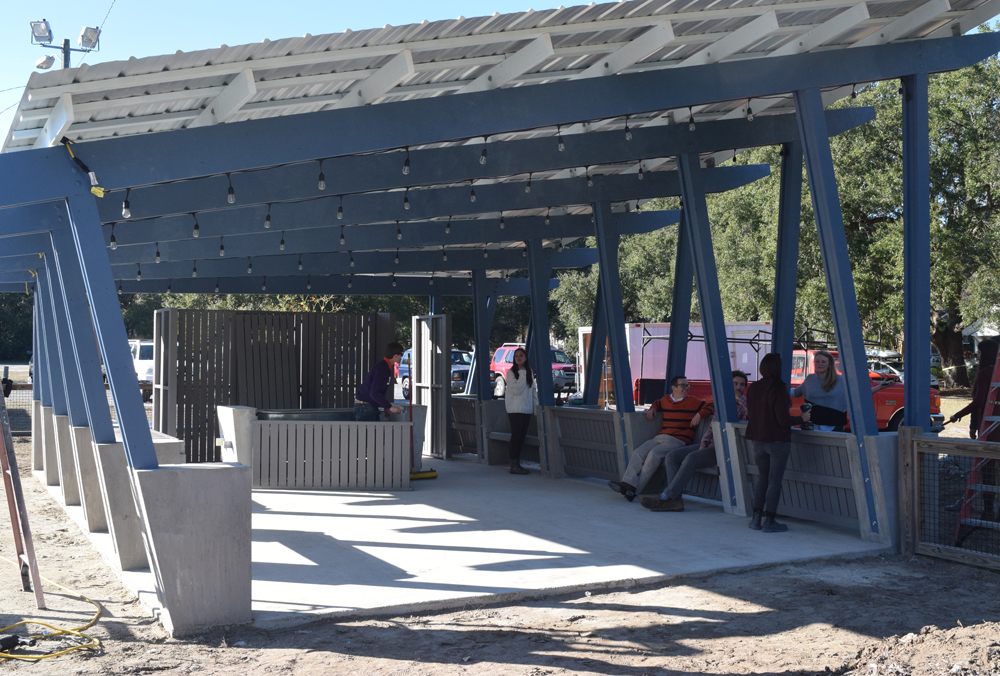 The students in the architecture class — 11 graduate students and one undergraduate — worked through each step of the building process to learn what it takes to turn an idea into reality, working through multiple designs to meet the conservancy’s needs, seeking permits from the city and physically constructing the pavilion.

The design portion took place from August to the beginning of November; for the final six weeks of the semester, it was all construction, initially in a carpentry shop at the Clemson Design Center and then on-site at the garden for the final three weeks.

The most challenging part of the class is time management, Pastre said.

Tyler McKenzie, a student in the class, said the program gave him “valuable insight” into the process of designing and building something, especially when working with a team of people with different ideas.

“This is, for me, the most fulfilling part of my architectural education ever,” McKenzie said. “I’m in year six now, I’ve got one more semester to go, and this is by far the most fulfilled I’ve ever felt at the end of a semester.”

Architecture students don’t typically participate in the construction of their designs, and McKenzie said it was a rewarding experience for him to see a design he helped create come to life.

“Through this process, I’ve gained a lot of respect for people in the construction field, and it’s really made me understand that when I draw something on the computer, when we get out in the field and it’s actually being built, it’s exactly going to be a one-to-one (conversion),” he said. “There will be things that are different because of ease of construction, and just the construction processes are just different, and you have to work within those.”

Pastre, who teaches the class every semester, said that the projects aren’t always to the same scale as the garden pavilion but that he tries to make sure the students have the chance to build a permanent structure, usually for a nonprofit.

“They don’t really get the full breadth of it in school usually, and so this is that opportunity for them to get a lot of that (experience),” he said.

A prior class from Clemson designed and built a pavilion at the Avondale community garden, and Pastre’s classes have also worked with the Halsey Institute of Contemporary Art and Redux Contemporary Art Center.

“The scale is small, although it looks big,” he said. “But in reality, I mean, it’s a complicated build for a simple solution. It’s just a pavilion, an open-air pavilion, so you don’t have any means of egress or fire safety and ADA (Americans with Disabilities Act) requirements. I mean, a lot of that has to happen with a typical project, but this gets them the idea, the breadth, of controlling a project from beginning to end.”

Pastre said the class is also about trying to “take to heart” the mission of Clemson as a land-grant university.

“Design services are something that is critically needed oftentimes, and we figured it makes sense to have that be something we do for a relatively meager budget,” Pastre said. “Just pay for materials, and then everything else is the students’ education.”

Wade said the Charleston Parks Conservancy paid $10,000 for the materials to build the storage shed and pavilion. The conservancy covered the cost through fundraising and a $5,000 grant from Publix.

Wade said the conservancy hopes to work with the Clemson Architecture Center again in the future.

“It’s been pretty amazing to watch this whole process, and it’s really neat that they get to learn through this process,” she said.