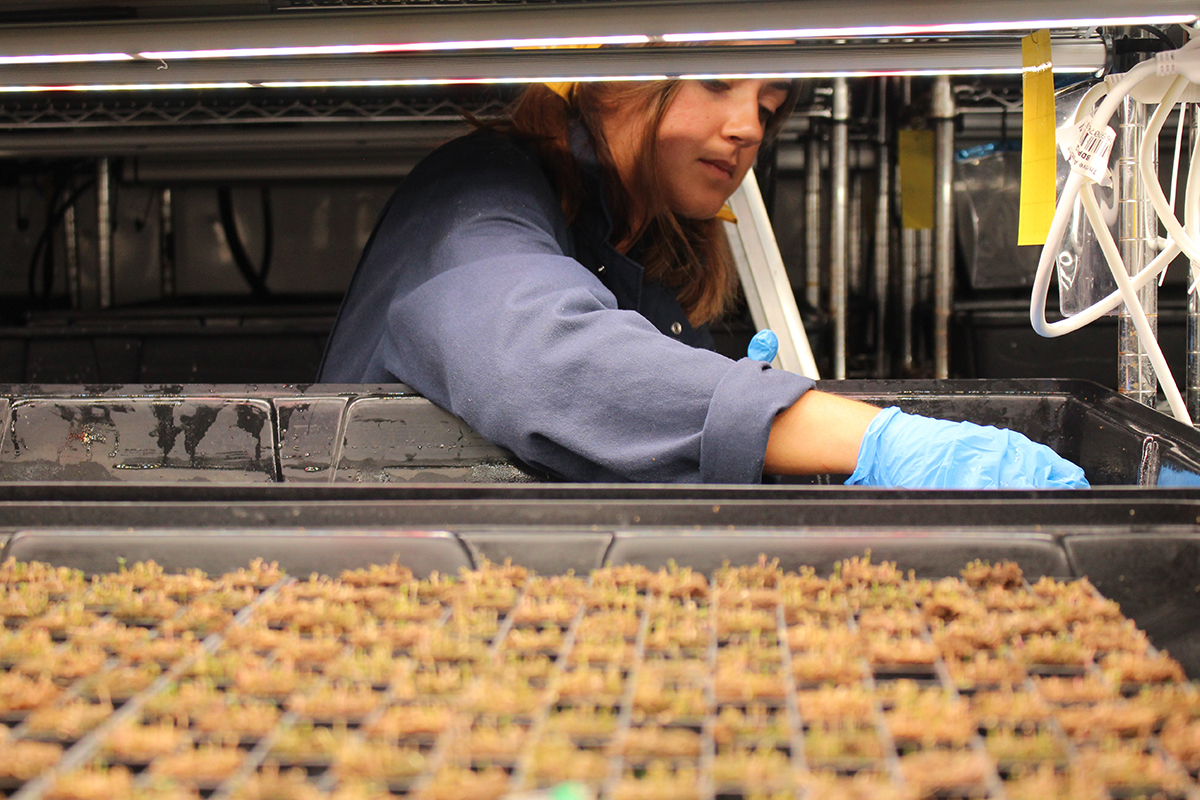 The call came in with a three-day lead time — a client in Maryland had run out of product and needed 50% of their usual order delivered to them by 5 a.m. Monday.

With no other way to fulfill this last-minute order, the small team of 12 at Heron Farms decided that one of them would have to make the nine-hour drive from Charleston to Baltimore with a refrigerated truck, loaded with the urgently requested cargo — sea beans.

Sea beans, a nutrient-packed succulent usually found in saltwater marshes, are seeing a growing demand as they gain recognition, especially in the retail and restaurant world.

Charleston-based Heron Farms, the world’s first indoor saltwater farm, is capitalizing on the cultivation of this plant, while combating the environmental impacts of seawater rise.

The highly salt-tolerant plant from which sea beans grow manages its natural environment by storing salt inside of its cells. This storage results in the vegetable’s bright, salty flavor.

Heron Farms wants to market this as a healthier salt alternative, as opposed to more than 90% of salts sold across the world that were found to contain microplastics, according to a 2018 study from the Environmental Science & Technology scientific journal. The highest levels were found in sea salts.

“We want to be like the stevia for salt,” said JB Joseph, COO of Heron Farms. “We want to produce a viable salt alternative, and since they aren’t able to absorb microplastics, they are the purest form of sea salt that you can get. They also have a ton of nutrients in them; they’re like a borderline superfood.”

According to Heron Farms’ March lab report based off lower salinity levels than which they’re currently using, a 100-gram sample contained 22.7 calories. Generally, sea beans contain high levels of iron and calcium, with more vitamin A than kale and more magnesium than avocados.
“It’s like plant-based salt; it’s healthier than table salt,” said Sam Norton, founder and CEO of Heron Farms. “Sea beans are a cousin of beets or spinach, and it shares a lot of their health properties.” 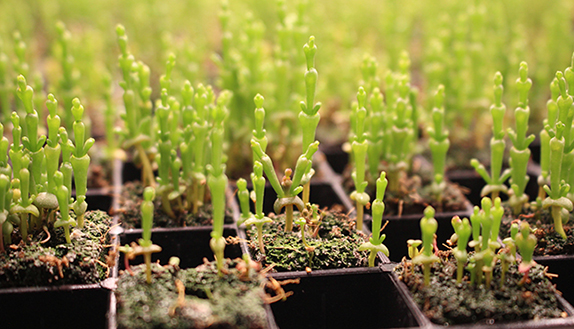 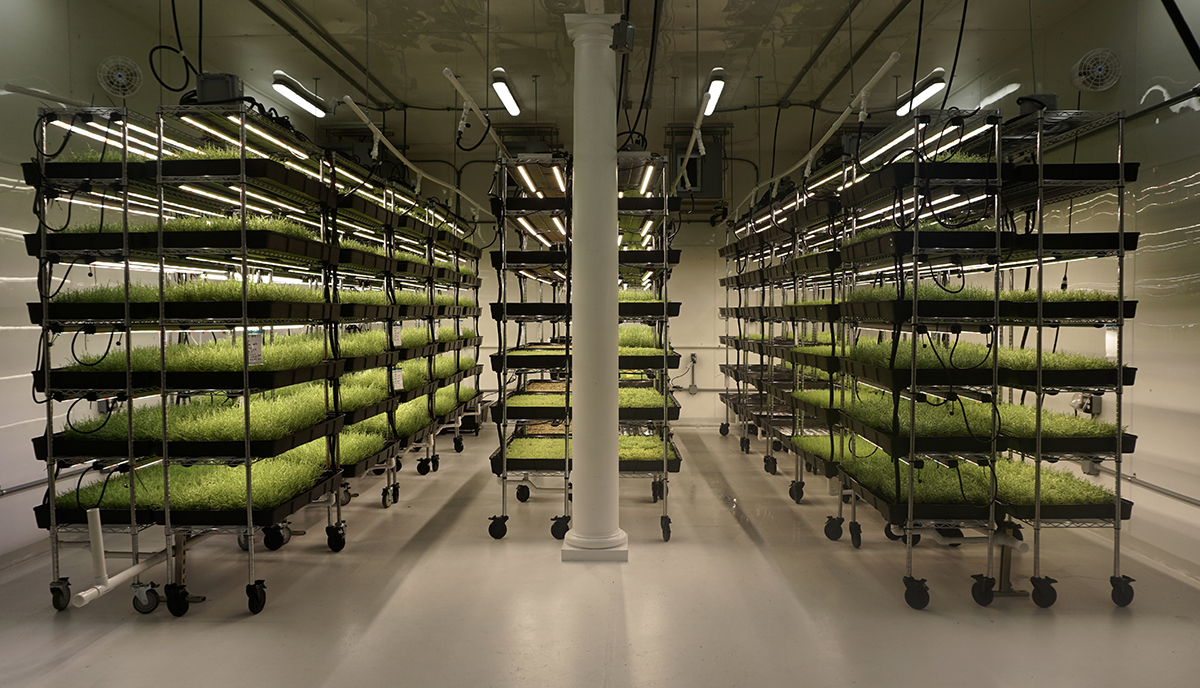 From ocean to dinner plate

Norton grew up on Isle of Palms. He, like many others living in coastal South Carolina, recognized the growing issue of seawater intrusion and regional flooding.

“What motivates me is that seawater doesn’t just have to be a problem; it can be a resource,” Norton said. “The reason why this plant has been so widely funded and researched over the last decade is that we’re realizing that 90% of the saltwater on the planet is actually usable for agriculture if we domesticate these types of plants called halophytes.”

Heron Farms uses seawater with a salinity of 30 parts per 1,000 — a little less salty than the Atlantic Ocean. This water runs through the pipes of the automated indoor hydroponic system, an advantage that lets them control growing factors year-round, Norton said. Plants are watered at the same time every day, imitating the tides, but on an expedited schedule.

All seawater comes from Bull Bays Saltworks, from which Heron Farms picks up about 750 gallons each week.

“We’re taking ocean water, which you can’t drink, and repacking it into a healthy plant-based form,” Norton said. “It’s like biting into a little bit of healthy seawater.”

The sea beans have an average seven-week seed-to-harvest growth cycle, and the farm produces about a few thousand pounds per year, Norton said.

These plants are gathered in 1-ounce or 1-pound packages and distributed for restaurant use or to be included in home meal delivery kits.
Restaurants in Charleston like The Obstinate Daughter, Jackrabbit Filly and 167 Raw have used sea beans on their menus, serving them as garnishes, sauces and flavorings.

Grocery stores like Publix, Harris Teeter and Whole Foods have also expressed interest in stocking sea beans on shelves, and produce delivery services like Blue Apron and Imperfect Foods have discussed including products in their boxes.

“Chefs are our main way of rolling this out to people, but our biggest customers are grocery box delivery services,” Norton said. “Now that we’re seeing very large companies throughout the U.S. getting on board and buying our product is a big sign.”

Heron Farms sells its 1-ounce package for about $2.59. Prices are in negotiation with these larger companies, Norton said.

The company has also partnered with Charleston kombucha company Dalai Sofia by adding the Heron Farms logo to its drink packaging. For every co-branded product sold, Heron Farms will replant one square foot of salt marsh, which has decreased over the years because of dredging and coastal development.

“We’re seeing a lot of what’s happening is that brands are going to attach restoration of the environment to a given product, and we’ve found a niche in that space,” Norton said. “As we prove the science behind it, we’re able to open up this sales funnel and bring in more product and more businesses that want to collaborate.”

Heron Farms’ salt marsh restoration occurs via a drone that flies over damaged land and drops seeds of the sea bean plant, one of few plants that can survive in overly salty areas and help bring life back into it.

To maintain demand spikes in the past, Heron Farms has used the help of contract farms. Going forth, plans include expanding locations into the West Coast, as well as introducing more products once the sea bean has been perfected.

From a one-person operation to a team that’s raking in about 70 applications for open positions and growing in demand every day, Heron Farms has grown to a point where they expect to break even before the original goal date.

“I’ve been doing research for four years, but we’ve only had a commercial-size farm since Thanksgiving, and it was early-May that we were kind of growing and doing a little bit of selling, but mostly trying to do R&D quietly,” Norton said. “I think now, we’re more sales-oriented and timely and ready for our next round of investment.”