Don't bet the farm on hemp just yet in S.C. 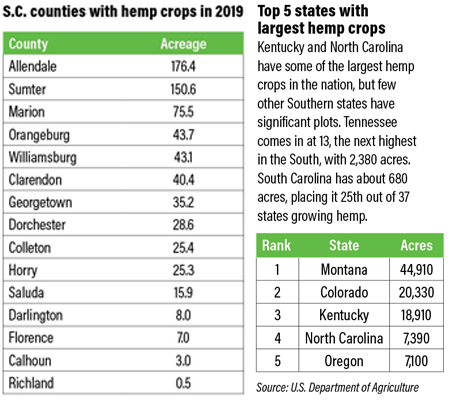 Let’s get this out of the way. Hemp is not marijuana. But they’re in the same family. For example, say one of your family members was a total pothead (that’s marijuana) but you were the industrious, entrepreneurial cousin who held a steady job and was on the verge of making it big in business. That’s hemp.

In 2018, the S.C. Department of Agriculture launched an Industrial Hemp Pilot Program, approving permits to 20 farmers statewide, mostly in the Midlands and along the coast.

Today, the Palmetto State has 114 licensed hemp farmers and more than 40 licensed processors, putting the state 25th out of the 37 states that grow hemp.

This isn’t just a matter of buying seed and growing non-weed, however. There are a lot of requirements, regulations and documentation required to run this fledgling industry, and some of the regs aren’t all that easy for small operators.