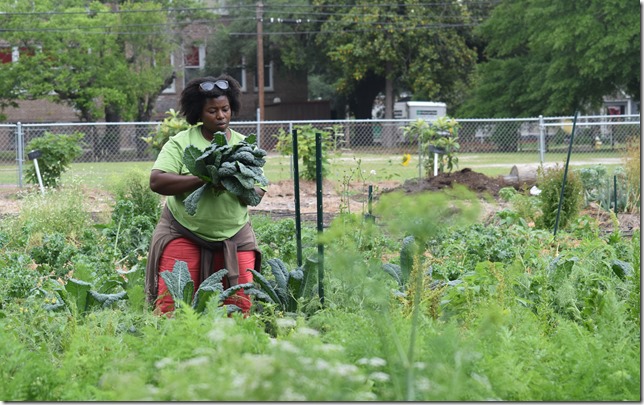 The last time the Chicora-Cherokee neighborhood in North Charleston had a bona fide grocery store was in 2005.

Since Winn-Dixie in the Shipwatch Square shopping center closed its doors more than a decade ago, residents of the mostly black, low-income community have had to travel — typically by bus — to find healthy food options or resort to prepackaged meals and snacks sold in the nearby convenience and dollar stores.

Jenkins, a 45-year-old gardening expert, decided that if a national grocer isn’t willing to plant roots in the community, she would take the initiative.

She started Fresh Future Farm about a year and a half ago. The 0.81-acre lot at 2008 Success St. was once a grass-covered playground for a now-closed school. North Charleston leases the space to the nonprofit for free.

The lot is now growing chemical-free tomatoes, Swiss chard, carrots, spring onions, bananas, turnips, spinach, basil, mint, garlic and blueberries, among other crops. Jenkins, along with five part-timers and a slew of volunteers, plants and harvests the crops by hand.

On May 3, Jenkins opened a small store on the corner of the farm’s property so residents of Chicora-Cherokee could once again buy produce in their own neighborhood. In addition to stocking the shelves with fruits and vegetables grown just outside, the store sells nuts, beans, snacks, dairy products and household goods that Jenkins buys in bulk.

“I can roll over here, grab my carrots that are picked out of the backyard and get my potatoes and green beans,” said Rebecca Rushton, president of the Chicora-Cherokee Neighborhood Association. “It’s awesome.”

Jenkins said she sets the prices to be competitive with the nearby Family Dollar — instead of the more steeply priced convenience stores — and accepts electronic benefits transfers, a government program that helps low-income families pay for food.

About 30% of the store’s customers use EBT, according to Jenkins, but she said her goal is to increase that percentage to at least 50%.

Fresh Future Farm will generate revenue from more than just the store. Jenkins said she’ll offer educational farm tours and workshops on farming techniques, and she will add an incubator kitchen so that produce can be baked, frozen and packaged.

‘I can figure it out’

Jenkins moved from Florence to downtown Charleston in 2000 to attend Johnson and Wales University, which offered programs in food service, hospitality and travel-tourism. It closed in May 2006.

While working and going to class, Jenkins lived in government housing with her two young children. The struggle to put food on the table was constant.

“I told my kids when they were little: ‘When we leave public housing, we’re going to have a house, and the house is going to have a garden.’ And we did that,” Jenkins said.

After graduating, Jenkins married and bought a home blocks away from Chicora-Cherokee. She turned the backyard into a farm, complete with chickens that laid a steady supply of eggs for the family.

Over the years, she became a certified master gardener through Clemson University, taught nutrition at the Lowcountry Food Bank, launched the Chicora Place Community Garden on North Carolina Avenue and took classes in Milwaukee through Growing Power Inc. to learn how to develop community food systems.

“Those things empowered me. Once that stuff happened, there’s not much you can tell me I can’t do. Even if I don’t know how to do it yet…I can figure it out,” Jenkins said.

An example for others

Many Chicora-Cherokee residents don’t have at-home internet access or a vehicle, and education beyond high school is not common, according to the Rev. Bill Stanfield, CEO of Metanoia, a nonprofit that works to address poverty and attract investment to the area. 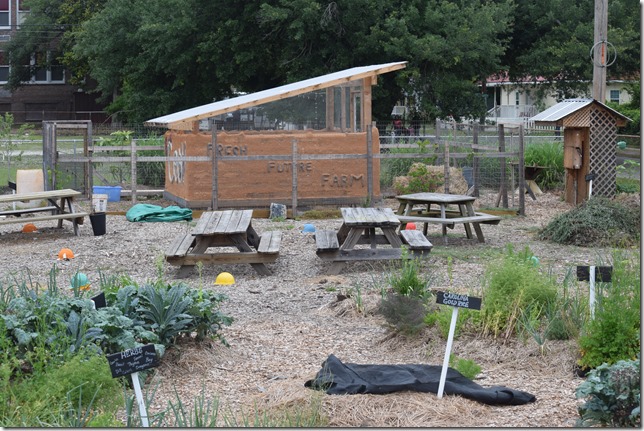 The store has “really become a resource for the neighborhood, not just in terms of the groceries sold, which are helpful, but a place where people can see food grown, experience food growing, and they can get involved,” he said.

Stanfield and Jenkins agreed that Fresh Future Farm has quickly become a spot where neighbors discuss what can be done to make the community better.

“The challenge for people that end up over here is you’ve got to see somebody else doing what it is that you want to do. … I don’t think the folks in this neighborhood have seen that, and now they do,” Jenkins said.

North Charleston Mayor Keith Summey said he is continuing to recruit a national grocer to the area.

The city owns the old Shipwatch Square shopping center and has put the property on the market. Summey said the contract will require the buyer to put a grocery store on the site.

“I think we’re fixing to get, hopefully, a landmark where we’ll see a grocery store come in,” he said. “We’ve been fighting for it forever.”