Boeing and AerCap Holdings N.V. today announced that AerCap is growing its 787 Dreamliner portfolio with an order for five additional 787-9 jets. 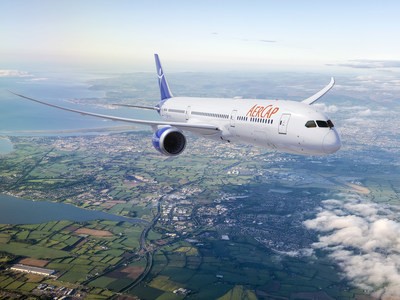 “AerCap is the world's largest 787 customer and we are very pleased to strengthen that position with this order for five additional aircraft,” Peter Anderson, chief commercial officer of AerCap, said in a news release. “This transaction is in line with our portfolio strategy of investing in the most in-demand new technology assets and will help us continue to support our airline customers meet their sustainability commitments.”

AerCap leases its fleet to airlines. AerCap has about 300 customers around the world. AerCap is listed on the New York Stock Exchange (AER) and is based in Dublin with around the world, including Miami, Memphis and Seattle.

AerCap now has 125 787 Dreamliners in its portfolio or on order, the release said. The world's largest 787 customer, AerCap continues to invest in the 787 family, which has received more than 700 repeat orders from 47 customers across the globe. The 787 has been the most-utilized widebody throughout the pandemic due to its efficiency, capacity and capability, according to the release.

"AerCap oversees a world-class leasing portfolio, epitomized by the most utilized widebody in the industry, the 787 Dreamliner," Ihssane Mounir, Boeing senior vice president of commercial sales and marketing. "With its unparalleled fuel efficiency and passenger appeal, the 787 Dreamliner family is playing a major role in sustaining, reopening and pioneering new routes in the long-haul travel market."

Since revenue service began in 2011, the 787 family has launched more than 325 new nonstop routes around the world, including 50 routes opened since 2020. The 787-9 can fly 296 passengers up to 7,565 nautical miles in a typical two-class configuration, the release said.

Deliveries for the 787 Dreamliner program have been halted for months while the company and the Federal Aviation Administration  look into production quality issues regarding tiny gaps found between the sections of the fuselage, about the width of a human hair. The gaps were not a safety of flight issue for the in-service fleet, Boeing said, but the company has been working since to address the problem. Boeing has declined to speculate on when deliveries will resume.